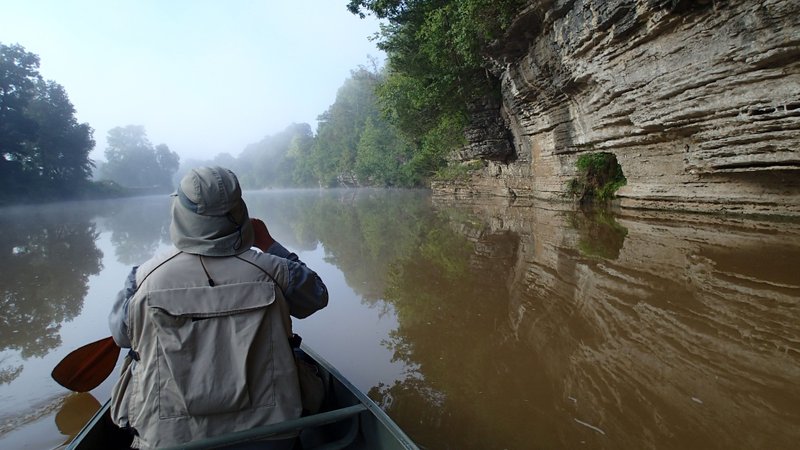 A canoe journey to the Beaver Lake swamp on the War Eagle arm is an easy trip. Joe Neal enjoys a misty morning on the War Eagle River July 12 2019 en route to the backwater. - Photo by Flip Putthoff

No need to make the long drive southeast to marvel at the beauty of an Arkansas swamp. Backwater areas at Beaver Lake are transformed into mysterious and glorious swamps teeming with wildlife when rain fills the reservoir.

One backwater in particular calls to canoe and kayak captains in high water times. The rise transforms a section of Beaver Lake's War Eagle arm into marsh and swamp two miles downstream from the historic War Eagle bridge. Bushes and trees rise up from the flooded domain. The new wetland attracts all manner of song birds, wading birds and waterfowl.

Butterflies and dragonflies buzz the shallow water and rest on on vegetation. No wonder some paddlers put this wetland on their must-see list when the lake fills to the brim, as it did this summer. Beaver Lake water backed up to the dam at War Eagle Mill after spring floods.

Those paddlers include Joe Neal of Fayetteville in the bow and his paddling partner in the stern of a sturdy 17-foot aluminum canoe. A misty, cool Thursday morning on July 18 was perfect for a swamp expedition.

A refreshing 62-degree morning had the War Eagle valley shrouded in cool mist. Launch site was a pay access on private land one-quarter mile west of the War Eagle bridge. A generous landowner lets people put two bucks in a mail box at the gate, then bounce down a dirt lane on his property to the river. Wise visitors keep trash bags in their vehicle and pick up any litter to keep the access clean and open.

It's a mile paddle down to the swamp from here, or about two miles if launching under the War Eagle bridge.

Adult swallows filled the foggy sky above the river. Birds searched out food for their young hidden in nests shaped like gourds or jugs attached to the rock.

By mid-July, most cliff swallows in this region have flown south, Neal noted.

"I'm guessing these are re-nesters," he said. "Their first nests probably washed away when the river flooded earlier in the year."

More bluffs rose up on river left where the landscape changes from cliffs to the backwater swamp. In southeast Arkansas, natural swamps formed eons ago. This Beaver Lake swamp was created by the U.S. Army Corps of Engineers when Beaver Dam was built in the mid-1960s. The whim of rainfall forms this man-made swamp.

Hardwood trees of oak and hickory stand tall and proud in the backwater. Bird song was a swamp symphony while Neal, an area authority on birds, recorded species after species in his field notes. He's written books and articles on birds and birding and leads field trips for the Northwest Arkansas Audubon Society.

Neal's eyes lit up and his pen picked up speed.

"The swamp is filled with green herons," he hollered when he spied a family group of four green herons. The dark-colored birds with bright beaks strutted their stuff on a sun-bleached log inches above the cloudy swamp water.

Two families of wood ducks bolted from the shallows and rocketed through leafy trees, sounding their whistling calls.

Birds weren't the only excitement. Dozens of buttonbushes with white, spiny orbs, poked from the wetland much to Neal's delight. Buttonbush is attractive to pollinators like butterflies and bees so Neal was tickled to see the plants.

"They're one of my favorite bushes in the world. They're a magnet for pollinators," he said. "Buttonbush can take this flooding. And here you can paddle right up to them. All kinds of bees and butterflies are using them." Pollinators fertilize an array of vegetation by carrying pollen from plant to plant.

The water level at Beaver Lake is slowly falling, but there's still time to get a taste of the swamp on the lake's War Eagle arm.

The back end of Beaver Lake’s Van Winkle Hollow arm is another area that becomes a swampy backwater when the lake is high. The arm is east of Rocky Branch park with public launch sites near the backwater.

The backwater butts up against the Historic Van Winkle Trail at Hobbs State Park-Conservation. Canoes and kayaks can be beached by the one-half-mile trail to explore the site that once was a thriving sawmill community.