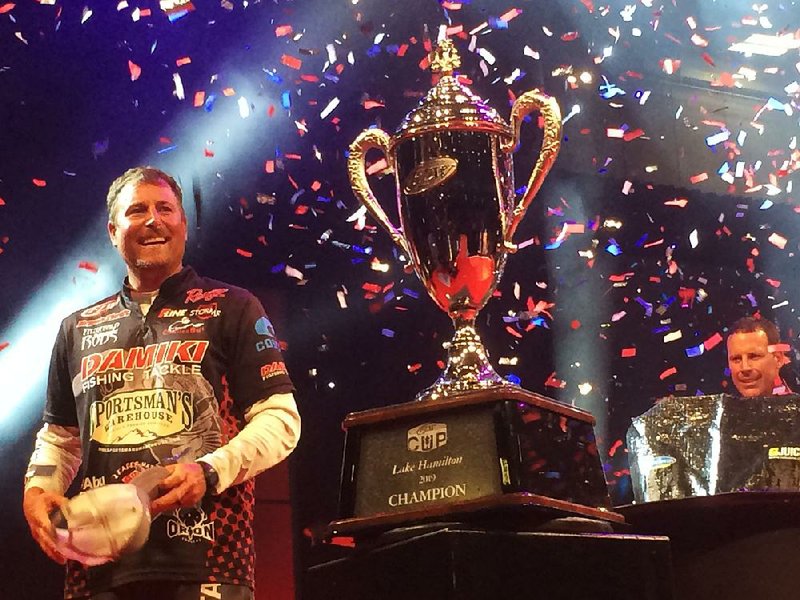 Bryan Thrift of Shelby, N.C., reacts after learning he won the FLW Cup on Sunday at the Bank OZK Arena in Hot Springs. Thrift, the leader after the tournament’s first two days, won his first FLW Cup and $300,000.

HOT SPRINGS -- Bryan Thrift of Shelby, N.C., led from start to finish to win his first FLW Cup and $300,000 Sunday at Lake Hamilton.

While the other nine anglers struggled to catch anything but small Kentucky bass in the final round, Thrift boated a five-bass mix of Kentuckies and largemouths that weighed 10 pounds, 3 ounces for a three-day combined weight of 38-7.

Dakota Ebare of Denham Springs, La., seemed to be riding the strongest pattern entering the final round, but he caught only four fish totaling 7-11. That was nearly half the weight he caught during the second round for a three-day total of 32-2 to earn $50,000.

Thrift has qualified for the FLW Cup in each of the 13 years he has been a pro. With 14 appearances, only Scott Martin of Clewiston, Fla., has more. Martin won the FLW Cup in 2011 at Lake Ouachita, but he finished fifth at Lake Hamilton.

In addition, Thrift has finished in the top 10 in all of his FLW Cup appearances, with seven top-five finishes. He has been the FLW Angler of the Year twice. Even with more than $3 million in career earnings, Thrift said winning the Cup was a glaring vacancy in his resume.

"This is something I've been chasing for a long time," Thrift said. "I've had a lot of close calls, I but never felt like I had a chance to win until this event. The Cup is the hardest event win because you just get one chance a year."

Thrift acknowledged that he is his most unforgiving critic. During the first two rounds he said he struggled to maintain his focus and composure, but he said that the FLW Cup being a three-day event helped avert some degree of self doubt. The FLW Cup was a four-day event until 2017.

"When the Cup was a four-day event, I usually screwed up one day," Thrift said. "When it went to three days, it made me happy because that was one less chance to screw up."

Thrift's strength in the Cup was versatility and adaptability. He said he did not rely on a single pattern, a single type of cover or a particular part of the lake. He said he caught eight of the 15 bass he weighed in on eight different baits, including a buzzbait, a walking bait, a Texas rig, a drop shot, five different crankbaits, a plastic frog, a Damiki Underspin and a single swimbait.

"Fishing in August, you've got to fish everything," Thrift said. "I can't leave anything unfished. I started every morning fishing the bank and shade lines. I fished boat docks and brush. I fished fish that were not on anything, that were suspended around bait. You've got to have that in August because two or three of those are going to let you down."

Even though Thrift's weight was the heaviest caught by the 10 finalists on Sunday, he said he didn't believe it would be enough until late in the day, when Jordan Osborne told him he hadn't caught a fish. Osborne finished the day without a fish to place 10th.

"In my mind I thought I needed 12 pounds," Thrift said. "In the history of the Cup, somebody always catches a giant bag on the last day and comes from behind. When Jordan Osborne came by and said [he] didn't have a fish, I thought maybe it was tougher than thought."

At 3:32 p.m., Thrift caught his biggest fish. At that point, he said, he was confident that he had sealed the victory.

"It's an amazing feeling," Thrift said. "I feel like everybody thought I'd win it eventually except for myself. To finally be in position and seal the deal, I don't have the words to describe it." 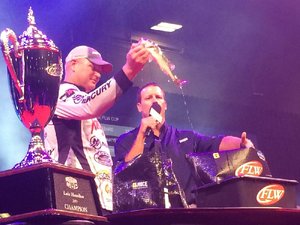 Photo by Arkansas Democrat-Gazette/BRYAN HENDRICKS
Kyle Walters shows off one of the five bass he caught Sunday during the final round of the FLW Cup on Lake Hamilton. Walters finished second with 33 pounds, 6 ounces during the three-day tournament.