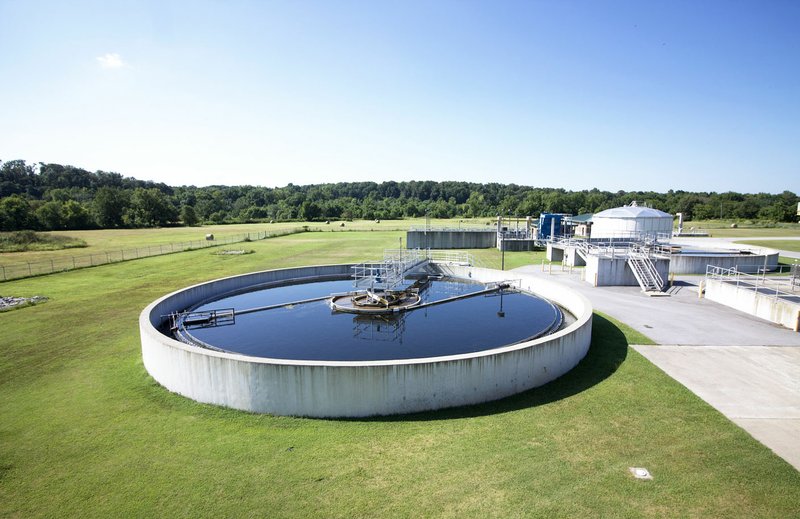 The inability of some cities to effectively treat and discharge the millions of gallons of wastewater generated daily in the region threatens their development and the environment.

“Test results … have indicated that elevated concentations of E. coli and coliform are present in the river.” June 2019 letter from West Fork to the Arkansas Department of Environmental Quality.

“We are operating the facility well over the design flow, due to the rapid population growth within our community.” July 2017 letter from Pea Ridge to ADEQ.

“Some of the rapidly growing areas have, or are about to have, some pretty serious issues as far as waste disposal issues,” says Jeff Hawkins, the executive director of the Northwest Arkansas Regional Planning Commission.

“We’re talking about millions of dollars every time we have to make a change,” says Larry Oelrich, the director of public works and administrative services for Prairie Grove.

To view the latest inspections for wastewater treatment facilities go to: www.adeq.state.ar.us/complaints/searches/#Display

Bethel Heights has become the most recent example of these wastewater woes. The town is under orders by the state to truck out much of its wastewater because of a failed septic system. Sewage from the system has pooled on top of the ground, among other permit violations.

The situation is severe enough the local prosecutor has threatened city officials with criminal charges if they continue to pollute the environment.

Other cities struggling over the years include West Fork, Decatur, Pea Ridge and Centerton.

"Some of the rapidly growing areas have, or are about to have, some pretty serious issues as far as waste disposal issues," said Jeff Hawkins, the executive director of the Northwest Arkansas Regional Planning Commission. The commission provides the framework for cooperation in the planning of transportation system improvements, according to its website.

Many of these cities' problems stem from outdated and overcapacity sewer systems unable to keep up with growing populations. Additionally, Hawkins said, septic tank effluent pumping systems, or STEP systems, used by towns such as Bethel Heights have failed, leaving residents to deal with rather unpleasant consequences.

Cities with inadequate sewer systems risk losing out on the region's booming development, which could affect sales and property tax revenue for local governments.

Inadequately treated sewage flowed in the past two years into the West Fork of the White River from West Fork's treatment plant and into Columbia Hollow Creek from Decatur's plant, according to records at the Arkansas Department of Environmental Quality.

Neighbors of the Bethel Heights treatment plant claim sewage flowed from the treatment fields to their land for years, an allegation town officials denied.

Possible solutions for cities include rebuilding or expanding plants, sending sewage to another city for treatment or sending it to a regional treatment facility. But all of those options are costly, making them impractical for some smaller cities, officials say.

Starting with the early 2000s construction surge, some towns grew faster than their treatment plants can handle, Oelrich said.

"You always try to stay ahead of the curve," he said. "You try to be proactive as opposed to reactive."

West Fork, Pea Ridge, Centerton and Decatur are more recent examples of the problem of inadequate facilities and growing populations.

The bedroom community of Centerton tried for years to get permission to expand its treatment capacity. Environmental Quality turned the city down in 2005 when it wanted to discharge into Spavinaw Creek and again in 2010 and 2011 when it sought to empty into McKisic Creek, according to agency records.

A leak in a main in 2014 resulted in an unpermitted discharge of sewage into McKisic Creek, causing a fish kill, records show.

It took three years for upgrades to be completed, but operation resumed in February. The Decatur plant is permitted to treat 3.8 million gallons of wastewater each day but is capable of processing up to 4.6 millions gallons, said James Boston, the city's public works director.

The new Simmons Foods plant between Gentry and Decatur, scheduled to open in October, will also hook up to Decatur's system. The pipeline to connect the plant to the treatment facility is very close to being completed, Boston said. The company estimates it will pay around $2.6 million annually in sewer rates to Decatur.

West Fork's population increased from 2,424 in 2012 to 2,635 in 2018, according to the U.S. Census Bureau data. The city was fined in 2014 after sewage was observed overflowing into the White River during heavy rain. A report earlier this year noted the fecal coliform bacteria leaving the plant was 43,750% above the allowed seven-day average limit. The report said the sewage was likely making its way into the river.

The White River flows into Beaver Lake, which is the main source of drinking water for Northwest Arkansas.

The Arkansas Natural Resources Commission approved loans in 2018 for a sewer line tying West Fork to Fayetteville's wastewater treatment system. West Fork has already spent $2 million replacing sewer lines for the project, which should be completed in 2020.

Pea Ridge's wastewater treatment plant was cited by the state in 2017 for overflow caused by heavy rain. The issues are ongoing, as the plant has been pumping more sewage than its original design intended, according to city officials and state inspections.

The city's population increased from 4,961 in 2012 to 6,045 in 2018. Ken Hayes, the superintendent for the Water Utilities Department, said in a 2017 inspection he believed the facility was "no longer adequate to meet the demands of the growing population of Pea Ridge."

Pea Ridge was one of five Arkansas municipalities to receive a loan in March to improve water and wastewater systems. The $2.5 million loan from the U.S. Department of Agriculture's Rural Development Division was part of $116 million in loans and grants provided to rural utilities in 23 states, according to a news release from the division. The project is estimated to cost $8 million.

The issues with wastewater treatment plants affect the continued growth many cities experience, Hawkins said. Because they require costly and time-consuming fixes, a town's development can stop as the facility is brought back into compliance.

"It most certainly affects growth and development and raises those questions: Is it a realistic expectation that we would continue at the current rate of growth?" Hawkins said. "Do we have the infrastructure to accommodate the rate of growth that we've seen?"

Cities lose potential property tax and sales tax revenue when development goes elsewhere, Hawkins said. There's a lot of demand for building sites in Northwest Arkansas, but growth will happen only where utility services are available, he said.

Jesse Fulcher, director of land planning for Rausch Coleman Homes, said sewer capacity is one of the first things developers look at when considering building in a community.

"If there's not, or if there's a major upgrade to the system that has to take place in order to provide service to a piece of property, that may be too expensive to handle and so you gotta go look somewhere else," Fulcher said.

He said a lack of service availability in a community means developers can't build. If there's nowhere else to develop, a business's profitability may be affected.

Elm Springs completed a sewer line last year connecting it to the Northwest Arkansas Conservation Authority, a regional treatment facility. Mayor Harold Douthit said hooking up to the facility has taken a burden off the city and contributed to its growth.

"We weren't at capacity, but we were headed there," he said.

He said the city would probably be in a situation similar to Bethel Heights if it hadn't hooked up to the regional plant.

Sending wastewater to other cities for treatment is a common practice; Farmington, Elkins and Johnson have sent their wastewater to Fayetteville for years, Oelrich said. West Fork will be the newest addition.

This solution provides short-term relief, as those cities will probably have to expand their treatment facilities as the region grows, or find other options.

"The growth is continuing," Hawkins said. "There doesn't seem to be any slowdown at all."

A more regional approach such as the Conservation Authority could provide a long-term solution for ever-growing communities. Eight cities have joined the authority since its creation in 2002, and each paid a share to help open a wastewater treatment facility in 2010.

The facility was initially designed to provide service to Bentonville and Tontitown, with the ability for other member cities to join as needed. Elm Springs is the only other city to connect to the plant.

The cost of connecting to the plant can be daunting.

A town such as Cave Springs, for example, would have to pay about $5,000 per household up front to hook up to the facility, Rep. Dan Douglas said.

There are 944 households in Cave Springs, according to the 2018 Arkansas Statistical Atlas, which includes multifamily dwellings.

"We're not just a customer with them, we've partnered with them," Holzkamper said.

"Our rates would have gone up by about 50 percent," he said.

Holzkamper also said higher rates would have caused construction in the area to slow down.

By connecting to Decatur, he said, construction has continued, and the city has been able to maintain its rates.

Cave Springs, like Bethel Heights, relies on a STEP system. Those systems collect, treat and pump the water through underground pipes, slowly releasing it into the soil. The soil's natural aerobic and bacterial activity then further treats the water.

STEP systems are commonly used in rural areas lacking a centralized sewer system, according to the Environmental Protection Agency's website.

"At one time, those were thought to be the solution to a lot of things," Hawkins said. "They've ended up being some big problems."

Cave Springs' system recently reached capacity, and the city is discussing whether and how to replace it, Hawkins said.

Mayor Randy Noblett said maintenance concerns arose about the treatment system, but the city addressed those issues and brought it back into full compliance.

The Valley View subdivision in Prairie Grove is finally being relieved of its STEP system. The area has been a problem since about 2012, according to state reports. The failing septic system caused waste to overflow onto the adjoining golf course and into tributaries. Oelrich said a sewer line connecting Valley View to the city should be completed by fall.

Constructing sewer lines isn't cheap, and Hawkins said cities such as Cave Springs are concerned with the expense to send their wastewater to the regional plant, which is in Bentonville, just south of the Northwest Arkansas Regional Airport.

"But it's something that, do they really have a choice?" he said.

Douglas has served House District 91, which includes parts of Benton County, since 2013. He said cost is the biggest problem for smaller cities wanting to connect to the regional plant.

"And it would make the rates so high that it's not feasible or affordable," he said.

Douglas said the problem needs a regional approach, and it should be looked at from the state level so it can potentially help mitigate the costs for small cities.

"We're probably the largest funder of water and wastewater systems in the state," Benefield said.

Benefield said the programs offer low rates and flexible terms. While the commission typically never awards a city 100% grant money, he said the amount offered depends on the city's obligations and costs, as well as how much the loan would affect the community's water rates.

"Even though we're a state agency, and we don't make a profit, our goal is to work with cities to provide low-interest financing," he said.

The federal and state programs operated by the commission are revolving loan funds, Benefield said.

"Where we give it out as loans, we're getting repayment of loans, and the money just continues to revolve back to new projects," he said.

The commission is the current noteholder for the regional plant, and it plans to help pay for expansions. Benefield said the Northwest Arkansas Conservation Authority plant is one of the commission's favorite projects, and it's looking to copy the model in other areas of the state.