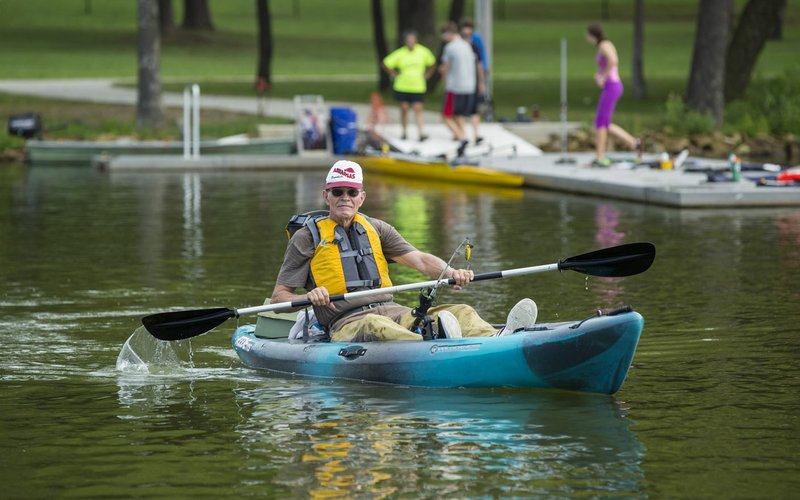 NWA Democrat-Gazette/BEN GOFF &#8226; @NWABENGOFF Gary Dieker, a veteran from Siloam Springs, fishes from a kayak Saturday during the Heroes on the Water event at Lake Fayetteville.

FAYETTEVILLE -- Veterans and first responders had an opportunity to heal and perhaps to collect a few fish stories Saturday on Lake Fayetteville.

About 17 people participated in a Heroes on the Water kayak fishing event designed to promote healing and camaraderie.

Heroes on the Water began in 2007 when founder Jim Dolan discovered the positive manner in which veterans responded to the simple act of being out in a kayak fishing, said Laura Armbruster, Heroes on the Water communications and community engagement director.

"I think there's this idea that time heals all wounds, and I think it's important for people to understand that it takes a little more than time," Armbruster said. "We owe it to the people who put themselves on the line day in and day out for our freedom and our safety to be there for them when they need us."

Post-traumatic stress disorder and depression have been some of the most studied health challenges among veterans and rescue and response workers, according to an article published in September 2018 by the U.S. Department of Veterans Affairs. As many as 34% of those studied were diagnosed with post-traumatic stress, while 21-53% struggle with depression.

Heroes on the Water recognizes veterans and first responders have many of the same needs for healing, Armbruster said.

"We encourage them to bring families. We know that's part of the healing process," Armbruster said. "When you're dealing with someone who's struggling, they're not likely to reach out and find a kayak fishing group."

Carla Pendergraft of Elm Springs volunteered with the organization as a military family member for the first time Saturday. Her father served with the Marines during World War II.

"It brings tears of joy for me," Pendergraft said. "I just want to express how thankful I am for our veterans. They're why our country is what it is today."

There's a level of camaraderie to the kayak fishing events that's therapeutic for participants as well, Armbruster said.

"They get to talk and tell fish stories and make really great connections," she said. "They do help each other start to heal through this process and start to really reintegrate into their own community."

Participants at varying levels of healing can join in, Armbruster said.

"Kayak fishing is easy, and it can be done regardless of your circumstances," she said, adding many of the kayaks have adaptive equipment for those who need it. "They get to actually do something that is independent for maybe the first time in months, depending on the level of injury and rehab that they're undergoing."

Disabled veteran Wade Kamps of Rogers served in both the Army National Guard and the Navy. He said events like Heroes on the Water help struggling veterans get out of the house when they might not have otherwise done so.

Kamps said he suffers from depression and sometimes finds it challenging to get motivated to leave his own home.

"This is a great event to get people out and moving and socializing with other people," Kamps said.

"We want them to keep coming back, get out into nature and unplug a little bit," he said. "It's not designed to do a one and done. The healing comes over time."

Heroes on the Water

Heroes on the Water features monthly kayak fishing events from March through October.

The events begin at 8 a.m. the second Saturday of each month at Lake Fayetteville. Kayaks are launched at 9 a.m., and lunch is served at noon.

The free experiences are open to veterans, first responders and their family members.