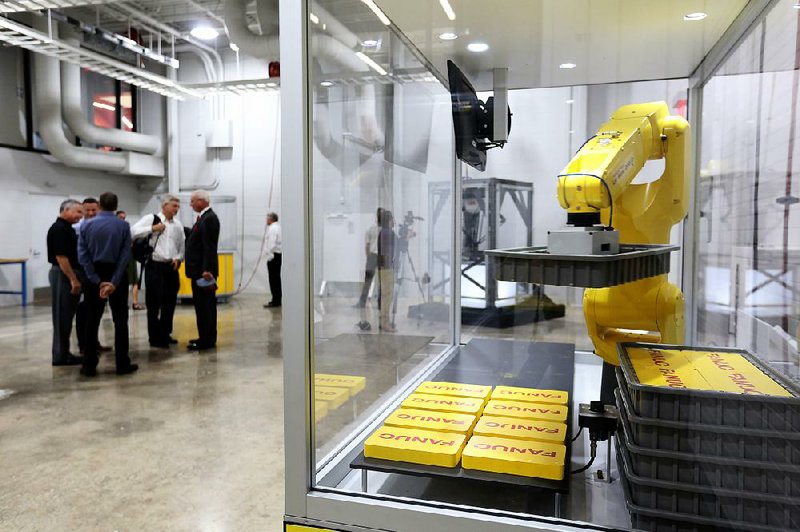 The robots have arrived in downtown Springdale, in a black warehouse at 317 E. Meadow Ave., directly behind Tyson's Emma Street technology center.

Designed to move chicken legs and packaging, the robots will eventually end up in processing plants across the country. But before that can happen, they will be tested in the new Tyson Manufacturing Automation Center, which opened Thursday.

The center offers a space for employees to develop in-house manufacturing processes with suppliers, and to learn how those processes and equipment work.

The automation center is Tyson's third major development in downtown Springdale since 2015; first there was the former Jones Truck Lines building, then the Emma Street building for information technology workers. The meat company has invested $215 million in robotics and automation in the past five years.

The investment is a part of the company's efforts to create better technologies and processes to better suit customers and consumers, said Noel White, Tyson's president and chief executive officer. It also will be a recruitment tool for world-class talent, he said.

"We're excited to see what [the Tyson Manufacturing Automation Center] can do," White said.

In attendance were company engineers and executives, U.S. Rep. Steve Womack, R-Ark., and Springdale Mayor Doug Sprouse, among others.

The two-story, 26,000-square-foot building has four main areas including a lab and classroom setting for employee training and a lab designed to replicate a processing plant.

Reclaimed wood from the original Tyson headquarters was used throughout the building, initially built to service trucks that hauled live chickens. Fayetteville architecture firm deMx designed the building. Before the renovations, the exterior was eggshell white.

"I don't know if I'm more impressed with what's in here, or the fact that you have repurposed some buildings in some areas that are so important to the heart of Springdale," Womack said.

Womack said he sees the building as a way to ensure jobs. For years, young people have been told the only pathway to success is a four-year college degree, which has led to a national student debt load worth $1.5 trillion, Womack said. The work being done here can lead to trade jobs, he said.

"What I see here is I see opportunities," Womack said.

After a presentation, members of the media toured the building, watching small-scale robotic arms operate in glass boxes. Some picked up straws with their claws, others sucked up little squares and placed them a couple of inches away. One spilled pills onto a tray, then picked up each pill and placed it into a vial. Another moved pieces of chicken from Point A to Point B.

All of the devices could be applied to the company's operations, said Marty Linn, director of the automation center. The benefits of deploying robots into processing plants is so they can handle some of the repetitive, grueling work assigned to human workers, he said.

"It's creating higher level jobs, and taking away physically demanding, very difficult jobs," Linn said. "It's not about replacing, it's about getting the process balanced with the people so the people can do the right value-added jobs."

Tyson Foods employs more than 6,000 people in Springdale, more than 23,000 in Arkansas and more than 140,000 around the world. So far, 15 workers are assigned to the new facility, with room to double in size depending on future workloads, Linn said. The purpose of it is to test equipment and technologies before they are installed in Tyson plants.

Tyson also plans to work with schools involved in robotics competitions. One robotics team from the Don Tyson School of Innovation is scheduled to travel this fall to Dubai, United Arab Emirates, for a competition that draws young people from around the world.

To ensure the entire team can attend, Tyson presented the group a $15,000 check to help offset travel costs.

"I look around here, I can tell you I have no idea what all this thing does," John Tyson said, pointing to two giant, yellow mechanical arms behind him. "Absolutely nothing; I know there's some buttons here."

Instead of a traditional ribbon-cutting, Tyson ended the presentation with a press of a button.

Mechanical sounds filled the room. Conveyor belts carrying boxes began to move as the giant, yellow arms picked up each box and placed it gently on pallets a few feet away, like a choreographed dance. Both arms continued for a few minutes until the pallets were filled, five boxes wide and five boxes high, with Tyson-labeled products.