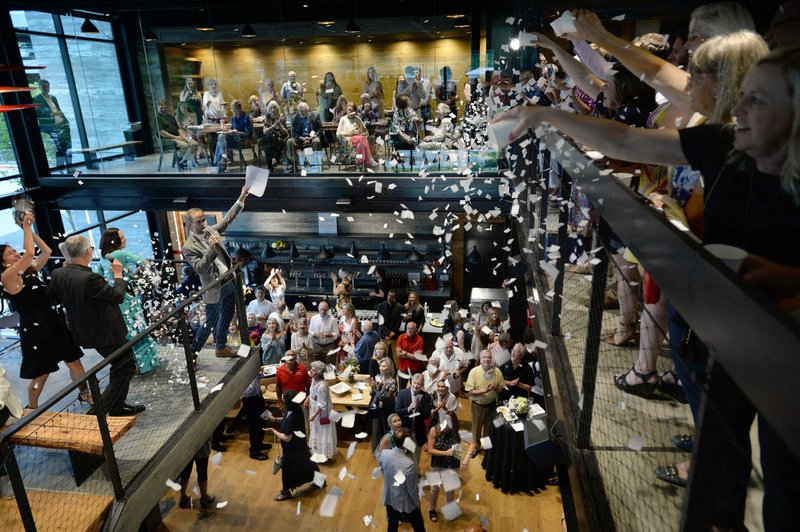 NWA Democrat-Gazette/ANDY SHUPE Visitors throw confetti Thursday as Robert Ford, artistic director, and Martin Miller, executive director, celebrate as ribbons are cut officially opening the new TheatreSquared facility in Fayetteville. The main building houses two theaters, a rehearsal room, offices, education and community space, design workshops and a cafe and bar. A separate building to the south has eight guest-artist apartments. Outdoor areas include a patio on Spring Street, a second-level terrace on West Avenue and a rooftop deck. The theater company opens its new venue with a production of Shakespeare in Love on Wednesday. Visit nwadg.com/photos to see more photographs from the tour.

FAYETTEVILLE -- Just like that, the confetti fell Thursday and two years of construction came to a close with the unveiling of the new TheatreSquared.

About 500 people witnessed the venue's first official night out on the town. The 50,000-square-foot, two-stage venue will open with Shakespeare in Love starting Wednesday.

The main building houses two theaters, the rehearsal room, offices, education and community space, design workshops and a cafe and bar. A separate building to the south has eight guest-artist apartments. Outdoor areas include a patio on Spring Street, a second-level terrace on West Avenue and a rooftop deck.

Those in attendance got a glimpse of the show on the staircase and platform overlooking the lobby. Four of the cast members enacted a scene from the play before remarks from Martin Miller, executive director, and Bob Ford, artistic director.

Designers Marvel Architects and Charcoalblue had the vision for the community's theater, and Baldwin & Shell made the vision manifest, Ford said.

"We are completely head over heels for this building," he said. "It is a space where theater is visible, where artists feel at home. It's a space that welcomes the public inside."

Plans for the new theater started in 2015. That year, the Walton Family Foundation chose the theater as one of the first participants in its Design Excellence Program. The program provides financial support to design public spaces.

"The only reason we were able to bring together this talented group in the first place was an act of faith on the part of the Walton Family Foundation," Ford said.

"Through a mutual leap of faith, TheatreSquared was one of our three inaugural projects," she said. "It really was a shared learning experience."

The project also received $9 million in taxpayer support. The City Council in 2017 invested $3.1 million toward construction of the building. The Advertising and Promotion Commission also committed $3 million over 15 years.

In June, Gov. Asa Hutchinson authorized a $2.9 million commitment from the state's rainy day fund. That milestone put TheatreSquared at 90% of its $31.5 million construction budget. Fundraisers are seeking donations to close out the Our Next Stage capital campaign, said Lynn Carver, board chairwoman.

"Together -- and that would be the operative word, together -- we're going to ensure a thriving home for Northwest Arkansas' remarkable live theater and meaningful arts and education," she said.