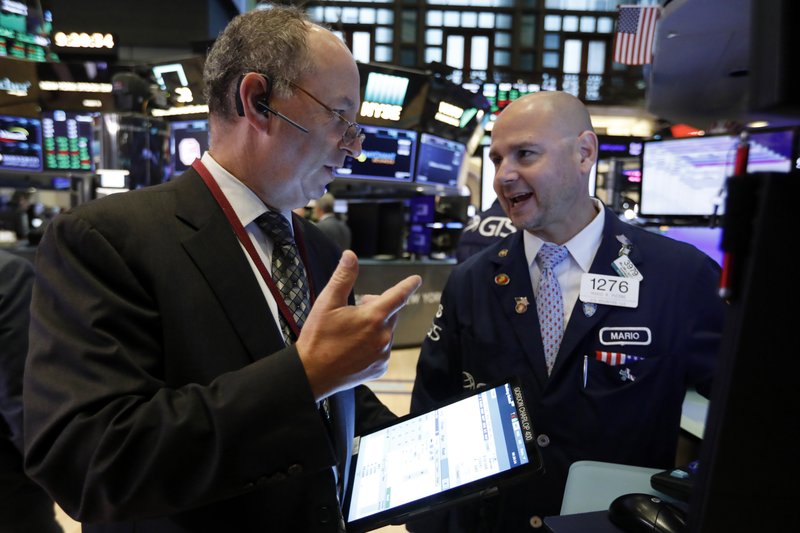 Trader Gordon Charlop, left, and specialist Mario Picone work on the floor of the New York Stock Exchange, Thursday, Aug. 8, 2019. Stock prices rose Thursday as investors braced for the next development in the U.S.-Chinese trade war, which has caused volatility in world markets this week, and after Beijing reported a rise in exports, easing some concerns about its economic slowdown. (AP Photo/Richard Drew)

Technology companies powered stocks broadly higher on Wall Street on Thursday, driving the S&P 500 to its best day in more than two months and erasing its losses for the week.

The rally followed an early rise in bonds yields after a weekly government report on unemployment claims came in better than economists had expected.

Worries that the trade dispute between the U.S. and China is hurting the global economy roiled the market earlier this week, sending many investors fleeing to safer holdings, such as U.S. government bonds. That pulled bond yields sharply lower.

The absence of new worrisome turns in the U.S.-China trade tussle may have also helped keep investors in a buying mood Thursday.

"That's what the market is attuned to right now, this confirmation of fears that things are going badly," said Willie Delwiche, investment strategist at Baird. "And if you're not getting that, then stocks can stabilize, bond yields can move up a little bit."

Bond prices fell early in the day, sending yields higher. The yield on the benchmark 10-year Treasury note went as high as 1.79% before falling back to 1.72% in late trading, little changed from late Wednesday.

President Donald Trump spooked the markets last week when he threatened to impose 10% tariffs on all Chinese imports that haven't already been hit with tariffs of 25%. China retaliated on Monday and allowed its currency, the yuan, to weaken against the U.S. dollar.

China stabilized the yuan on Tuesday and that helped lift U.S. stocks after their worst day of the year. But central banks in New Zealand, India and Thailand cut key interest rates on Wednesday, sending U.S. stocks into an early dive before recovering at the end of the day.

The turbulence of the past couple of weeks followed the months of relative calm that investors had been enjoying. Before Monday's 3% drop for the S&P 500, they hadn't seen a loss of even half that size since mid-May.

Since this bull market began over a decade ago, the S&P 500 has had 24 days where it lost at least 3%. That averages out to one every five months or so, but they don't happen in such a regular fashion.

Instead, the market tends to shift between periods of calm and sharp bursts of volatility. In 17 of the 24 times that the S&P 500 fell 3%, it either preceded or followed another such drop within a month. So Monday's 3% fall may be the precursor to more, if history is a guide.

"The foreseeable future is going to be a lot of noise," said J.J. Kinahan, chief market strategist for TD Ameritrade.

The last time the stock market had a drop of 3% was on Dec. 4, when investors were worried that the Federal Reserve was raising interest rates too aggressively and there were concerns that trade turmoil could create a recession. But it wasn't in isolation: It was the third such drop within the span of two months.

A more extreme example is the summer of 2011, when the S&P 500 had four drops of more than 4% in just two weeks. Worries about the European debt crisis and the first-ever downgrade of the U.S. credit rating at the time were roiling markets around the world.

That episode also showed that big up days can be interspersed between big down days. That same stretch had two days where the S&P 500 surged more than 4%.

Investors snapped up technology stocks in a signal that they are more willing to take on risk after several days of fleeing to safer holdings. Microsoft rose 2.7% and Oracle gained 2.5%.

In another sign that investors were feeling more bullish, safe-play sectors such as utilities and makers of consumer products lagged behind the market. Investors usually shun those sectors when they want to take on more risk.

Information for this article was contributed by Damian J. Troise and Stan Choe of The Associated Press.