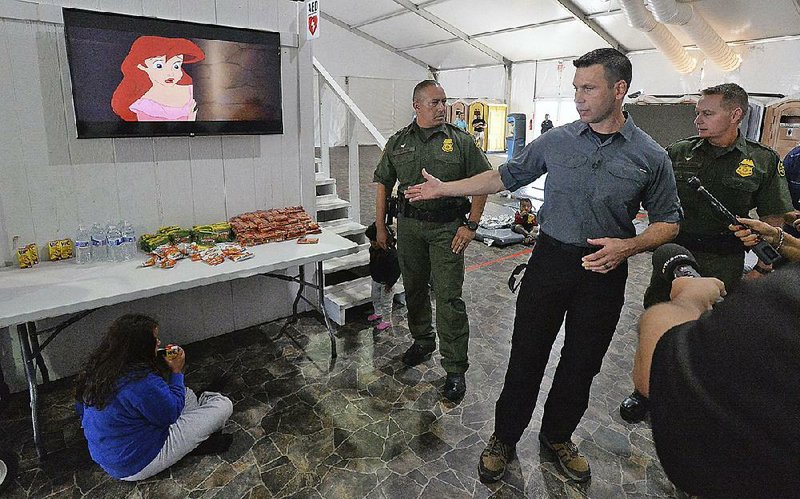 Acting Homeland Security Secretary Kevin McAleenan (second from right) tours a migrant center Thursday in Yuma, Ariz. He noted a steep drop in the number of children being detained but stressed that “we remain at and beyond crisis levels” in the number of people trying to cross the border illegally.

WASHINGTON -- The number of migrants encountered by U.S. authorities at the southern border has dropped below 100,000 for the first time in five months after increased collaboration with Mexico and Guatemala to crack down on the flow, according to government data released Thursday.

In July, U.S. Customs and Border Protection officials encountered 82,049 people, down 21% from June when the number was 104,344 people and 43% lower than May. The number of families and minors crossing the border also dropped.

The monthly numbers have become a yardstick by which President Donald Trump measures the success of his administration's efforts to reduce illegal immigration. The number of migrant families from Central America has risen sharply during his term despite his hard-line policies.

News of the decline comes as 22 people were killed and dozens of others were injured in a mass shooting in El Paso, Texas -- a border city that has become the face of the migration crisis. The shooting suspect is believed to have posted a racially biased, anti-immigrant screed on the Internet before the attack.

Trump visited both El Paso and Dayton, Ohio, the scene of a second mass shooting last weekend where nine people were killed and dozens were injured. He was greeted by protests in both places. Critics contend Trump's own words have contributed to a combustible climate that has spawned death and violence.

Over the past few months, there has been outcry over squalid conditions for migrant children crammed into border facilities not meant to hold them longer than 72 hours. Some were kept for weeks because of delays in handling such cases.

Acting Homeland Security Secretary Kevin McAleenan traveled to another border town -- Yuma, Ariz. -- on Thursday to detail the border numbers. He said that in mid-June more than 1,250 children were in custody for 72 hours or longer -- but that had dropped to about 160 children by Wednesday, with an average custody time of fewer than 24 hours.

He did not provide the length of detention for single adults, who are often held the longest.

Seasonal declines in migration are common; fewer people make the dangerous journey when it's hot. But McAleenan said the May-to-July drop was much steeper than the same time last year.

He stressed it did not mean the crisis had ended.

"The situation is improving by every available metric, but, and I want to be very clear about this, we remain at and beyond crisis levels," McAleenan said.

Guatemalan officials recently agreed to what's known as a "safe third country" pact with the U.S., meaning anyone traveling through that country from El Salvador or Honduras would not be able to claim asylum in the U.S. The agreement was made even as Guatemalan courts blocked the effort. U.S. officials believe it will be in effect by the end of the month.

The Trump administration also sought to curb asylum protections at the southern border, though that effort was blocked temporarily by U.S. courts.

In June, after Trump threatened tariffs on Mexico, leaders there agreed to expand the administration's program forcing U.S. asylum seekers to wait on the Mexican side of the border.

Mexican police, soldiers and National Guard forces are raiding hotels, buses and trains to round up Central Americans before they can make it to the border. And they are busing migrants from the Texas border hundreds of miles to inland towns.

While July's border numbers are below the peak of earlier this year, they are still high compared with recent history. Until this March, July's total would have been the highest number in at least the past six years, spanning multiple previous surges of adults and children crossing to the U.S.

Information for this article was contributed by Nomaan Merchant of The Associated Press.