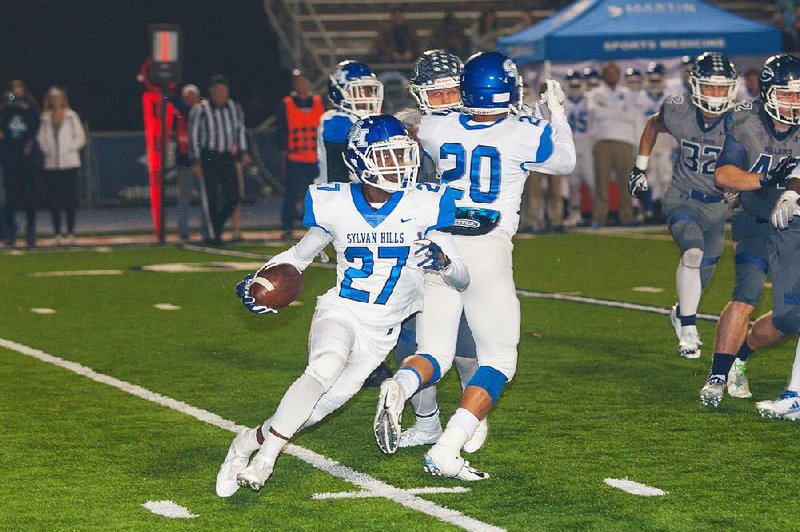 Sylvan Hills junior wide receiver Shajuan Esteen, who was also one of the Bears’ top rushers, had a team-high 26 catches for 300 yards and 4 touchdowns last season. - Photo by Mark Stallings

The start to the 2018 season wasn't ideal for Sylvan Hills, but the way the Bears finished has them brimming with confidence.

After beginning the year with an improbable comeback victory over Arkadelphia in the opener, Sylvan Hills was outscored 128-36 in its next five games, all losses, and split its final four to back its way into the postseason. The Bears did the unthinkable over the next few weeks.

Bears at a glance

Sylvan Hills knocked off higher-seeded teams Russellville and Marion on back-to-back Fridays on the road to become the first No. 6 seed to play in a semifinal game in Class 6A. The Bears' fortunes ran out against eventual champion Greenwood, but Sylvan Hills kept the game close until the Bulldogs pulled away late.

That late-season run gave the Bears a taste of playoff football during their first foray into Class 6A and afforded Coach Jim Withrow an opportunity to see just how good his young team could be when things click.

"The young guys got to play a lot, and they carried us," Withrow said. "We kind of got our footing there toward the end of the regular season, and it carried over into the playoffs, where we surprised a few people."

The Bears won't sneak up on anyone this season, especially with as many as 12 starters back. Sylvan Hills is also returning several others who saw extensive playing time during the latter part of 2018.

Among those players is quarterback Emil McCoy, 5-10, 165 pounds. He started the final seven games last season as a sophomore and engineered a handful of game-winning drives before finishing with nearly 800 yards of total offense and eight touchdowns.

"He did a really good job of stepping in," Withrow said, "and he's getting better each week. He's worked hard on his reads and decision-making, just getting better with everything."

Senior wide receiver Shajuan Esteen, 5-10, 170, gives McCoy a versatile threat on the outside with his ability to stretch the field. Esteen, who was also one of Sylvan Hills' top rushers, compiled a team-high 26 catches for 300 yards and 4 touchdowns as a junior. Senior Cole Bland, 5-10, 175, provided the Bears with additional firepower at running back.

Sylvan Hills will have to replace a few guys along the interior, but Withrow has senior and University of Central Arkansas commitment William Mayo, 6-4, 330, returning to the fold.

Withrow has moved senior Jayrus Howard, 5-10, 220, from the defensive line to offense. Howard, who started every game a year ago, had nearly 30 tackles last season, including nine behind the line of scrimmage.

The Bears had their share of struggles on defense last year, giving up at least 26 points in eight of their 13 games. Withrow hopes that side of the ball will be much better, especially with senior free safety Javion Franklin in the secondary.

"He's a 4.0 student that gives us a lot of experience," Withrow said. "He's got a lot of skill back there, particularly with his speed. He isn't the biggest, but he plays big at times."

Franklin will have senior Khalil Muhammad, 5-11, 155, to assist on the back end. Muhammad amassed 45 tackles and deflected six passes at cornerback as a junior.

The defensive line is anchored by seniors Brandon Donohue, 6-0, 190, and Jacob West, 6-2, 200, both of whom are expected to start at end, with Donohue possibly seeing time at linebacker alongside classmate Myles Gaither, 5-9, 170.

"We think we'll have a chance to be a pretty good team," Withrow said. "The one thing we understood about Class 6A was just about anybody could beat anybody. The kids understand how hard it is, but they want to ultimately show that the end of last season wasn't a fluke.

"They want to show people that we're legit."