A special primary election to replace former state House Minority Leader Charles Blake will head to a runoff next month after none of the five Democratic candidates earned an outright majority in the first round of voting Tuesday.

No Republicans filed to run for the open seat in the heavily Democratic district, based in southeast Pulaski County. A runoff primary election held on Sept. 3 will decide who fills the remainder of Blake's two-year term ending in 2021.

With 16 of 16 precincts reporting, the unofficial results were:

"I'm feeling great," said Ennett, who focused on educational issues while on the campaign trail. "A lot of people were sympathetic about returning the [Little Rock School District] to local control."

Despite her educational focus, Ennett said the biggest concern she heard from voters was regarding gentrification in Little Rock's Pettaway neighborhood, where she lives.

Stephens, who at times described his campaign an as extension of his unsuccessful 2018 primary challenge, said he would better highlight his political experience in the runoff. The consultant said he had previously worked on President Barack Obama's two presidential campaigns, as well as former Gov. Mike Beebe's campaigns.

"To not have raised nearly as much money as Denise, to be where I am right now, I feel good," Stephens said.

Turnout in the special primary Tuesday was low, with about 8.5% of the district's 15,908 registered voters casting ballots, according to the Pulaski County Election Commission.

The special election was called after Blake stepped down from the seat in May to serve as Little Rock Mayor Frank Scott's chief of staff. The former Democratic leader did not endorse any of the candidates running to replace him.

Ennett led all of the candidates in fundraising during the month of June, which was the only fundraising period for which reports were publicly available before the election. She had raised $12,563 followed by Hood's haul of $6,500.

None of the other candidates raised more than $5,000.

Talley, while raising the least amount of money, relied on a social media campaign that fed off of his well-publicized disputes with the Little Rock Police Department and other law enforcement.

Last fall, a columnist with the Washington Post wrote an expose criticizing the department's use of no-knock warrants that included video footage of police blowing Talley's door off its hinges while he sat on the sofa.

While Talley became an outspoken critic of police policies, he also faces pending felony charges in Cross County over a November 2018 incident in which authorities said he struck a Cross County deputy with a car while fleeing. Throughout the campaign, Talley maintained his innocence and said he plans to fight the charges.

Hood had served on the state's Workers Compensation Commission for several years before becoming a clerk at that agency. Williams, originally from Opelousas, La., is a 21-year-old student at Philander Smith College in Little Rock.

Because the only candidates running in the race are Democrats, the outcome will not affect the partisan makeup of the 100-member House. The chamber now as 76 Republicans and 23 Democrats. 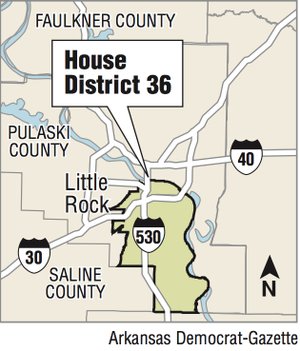