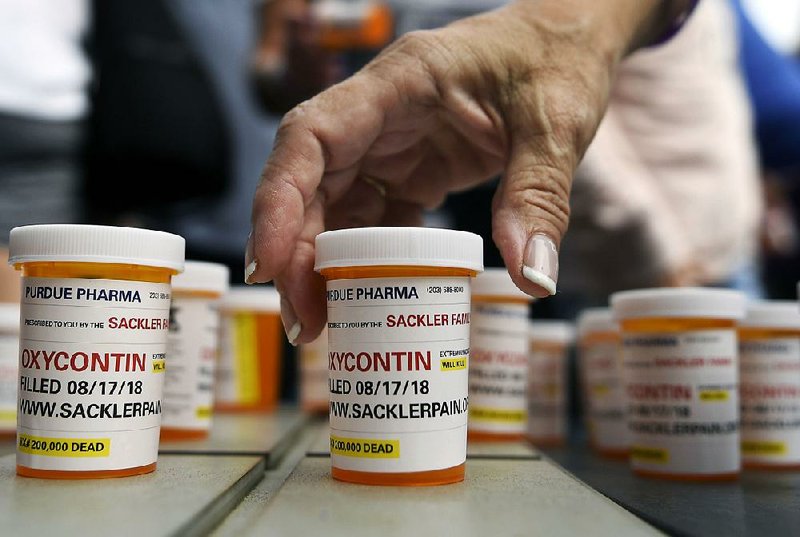 Three major pharmaceutical companies have proposed a monetary settlement to end litigation by attorneys general of 39 states alleging that drug makers fueled the opioid crisis by flooding the market with painkillers like Oxycontin.

McKesson, Cardinal Health and AmerisourceBergen have proposed paying $10 billion to settle claims that they helped to fuel the U.S. opioid epidemic -- the first sign of progress in resolving state lawsuits against the drug distributors, according to people familiar with negotiations.

The companies, which deliver the majority of prescription medications to U.S. pharmacies, made the verbal proposal as part of talks with a group of state attorneys general, said three people familiar with the offer who asked that their names not be used because they weren't authorized to speak publicly.

It's the first time in two years of discussions that the three distributors put a dollar figure on the table to resolve lawsuits against them, the people said. The National Association of Attorneys General -- handling talks on behalf of 39 states -- countered with a demand for $45 billion to cover costs from the public-health crisis of opioid addiction and overdoses, the people said. Any settlement would be paid out over decades, they said.

Whether the distributors and attorneys general can agree to a deal remains uncertain. But reaching a compromise may not be the toughest hurdle. The distributors face almost 2,000 additional lawsuits brought by cities and counties across the U.S., with a separate group of lawyers leading the litigation. Getting them to sign on to any deal could prove challenging.

McKesson spokeswoman Kristin Hunter Chasen said in an emailed statement, "We regularly engage with the state attorneys general, but the company has made no settlement offers."

The people familiar with the matter reiterated that the companies -- including McKesson -- have made an opening proffer of a settlement price. Chasen declined to elaborate on McKesson's discussions to resolve the litigation.

Spokeswomen for AmerisourceBergen and Cardinal Health declined to comment on the discussions or on what one company said was "speculation."

Samantha Fisher, a spokeswoman for Tennessee Attorney General Herbert Slatery, one of the leaders of the attorneys general group holding the talks, didn't return a call for comment on the settlement offer Monday.

A global settlement covering all opioid manufacturers and distributors may end up costing the companies a combined $30 billion to $55 billion, according to analysts at Nephron Research, an independent health-care investment research firm. Wells Fargo analyst David Maris said a final tally could be even higher, at almost $100 billion.

The drug distributors generate large amounts of cash that could be used to pay a settlement. In its fiscal 2019, San Francisco-based McKesson produced $4.04 billion from operations, according to data compiled by Bloomberg. In fiscal 2018, Cardinal generated $2.77 billion and AmerisourceBergen produced $1.41 billion.

At the heart of the lawsuits are allegations that drugmakers including Purdue Pharma and Johnson & Johnson downplayed the health risks of opioids and oversold their benefits through aggressive marketing campaigns. Distributors are accused of ignoring red flags about misuse of the painkillers and illegally flooding states with pills.

McKesson, Cardinal Health and AmerisourceBergen, along with other distributors, shipped 76 billion pain pills over a six-year period starting in 2006, according to the U.S. Drug Enforcement Administration. The companies deny the governments' allegations and have advanced dozens of legal and factual defenses, saying they complied with all state and federal laws.

Lawyers for all sides were appearing Tuesday in federal court in Cleveland, where U.S. District Judge Dan Polster has consolidated most of the opioid lawsuits. The first trial of the many local-government claims was set to start Oct. 21, but the defendant companies are seeking a delay, saying in court filings that they need more time to prepare for what will be "one of the most complicated trials in legal history."

In an indication of how complicated settlement talks will be, local governments are pressing to set up their own negotiating class to represent more than 24,000 cities and counties to work a separate deal with the pharmaceutical industry. Many state attorneys general oppose the bid by cities and counties.

"Fifty state attorney generals are better representatives of the people of their state," Ohio Attorney General Dave Yost said in a July 23 letter to Polster. He added that private attorneys hired by local governments would likely take a chunk of any settlement in legal fees.

While some states have the power to resolve opioid cases with deals that supersede separate litigation by local governments, many don't, said Elizabeth Burch, a University of Georgia law professor."So it's hard to see how this deal would fly given it can't be crammed down on all the cities and counties," Burch said. "The companies want closure. They don't want to have to do two settlements."