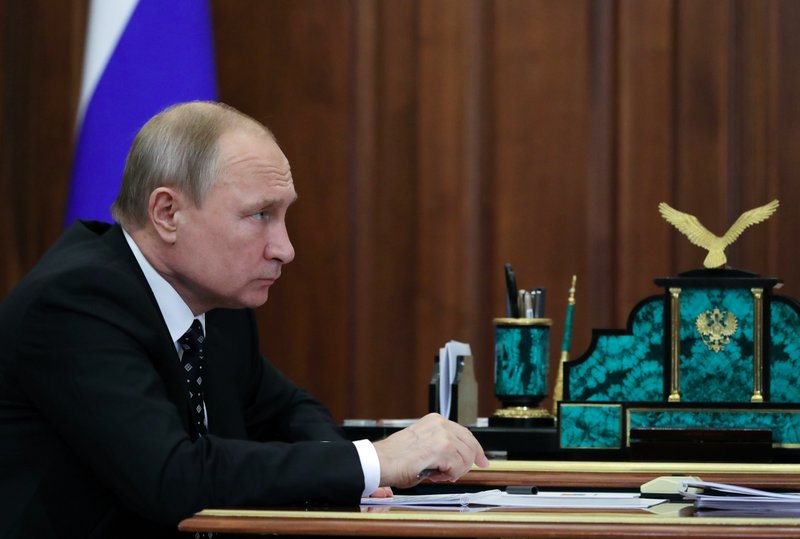 MOSCOW -- Russian President Vladimir Putin said Monday that Russia will only deploy new intermediate-range missiles if the U.S. does after the demise of a key nuclear pact and called for urgent arms control talks to prevent a chaotic arms race.

Putin issued his statement after the 1987 Intermediate-Range Nuclear Forces Treaty came to an end Friday with the U.S. announcing its intention to test and deploy weapons previously banned by the treaty. Washington said its withdrawal was caused by Russian violations of the pact, a claim that Russia has denied.

Putin condemned that the U.S. exited the treaty "in a unilateral way and under a far-fetched reason," saying that it "seriously exacerbated the situation in the world and raised fundamental risks for all."

He said in a statement that Russia will carefully monitor Washington's actions and respond in kind if it sees that the U.S. is developing and deploying new intermediate-range missiles.

The treaty, which was signed by U.S. President Ronald Reagan and Soviet leader Mikhail Gorbachev, banned the production, testing and deployment of land-based cruise and ballistic missiles with a range of 310 to 3,410 miles. Such weapons were seen as particularly destabilizing because of the shorter amount of time they take to reach targets compared with intercontinental ballistic missiles, raising the likelihood of a nuclear conflict over a false launch alert.

"If we receive reliable information that the U.S. has completed the development and launched production of the relevant systems, Russia will have to engage in full-scale development of similar missiles," Putin said.

The U.S. has accused Russia of developing and deploying a cruise missile that violated provisions of the pact. Russia has denied the breach, and, in turn, accused the U.S. of violations.

Putin noted that Russia for now will rely on its existing air-launched X-101 and Kinzhal missiles and the Kalibr missiles carried by submarines and other naval vessels, as well as prospective weapons, including the Zircon hypersonic missiles, to ensure its security.

He also reaffirmed Moscow's earlier pledge not to deploy intermediate-range weapons until the U.S. places them near Russia's borders.

A senior Russian lawmaker noted in comments carried by Russian news agencies that Putin's statement was a warning to nations that agree to house American missiles.

"Those words were addressed to the U.S. allies," Konstantin Kosachev, the head of the foreign affairs committee in the upper house of Russia's parliament. "Those who would host the missiles would automatically and voluntarily make themselves targets for nuclear weapons."

Putin also warned that the U.S. exit from the treaty could pave the way for the demise of other arms control pacts and trigger an all-out arms race.

"In order to avoid chaos without any rules, restrictions and laws, it's necessary to weigh all the dangerous consequences and start a serious dialogue without any ambiguities," Putin said. "Russia considers it necessary to resume full-fledged talks on strategic stability and security without any delay."

Also Monday, Australian officials confirmed that their country will not be used as a base for any planned U.S. mid-range missiles, after talks with American officials in Sydney.

Australian Defense Minister Linda Reynolds said Monday in Sydney that while the locations for the missile bases were not yet known, Australia would not be one of them. She said Esper made no such request and that no such request was expected from the U.S.

"I asked him directly, 'Was there any expectation of a request,' and he said, 'No,'" Reynolds told Australian Broadcasting Corp. radio.

Prime Minister Scott Morrison later echoed Reynolds' comments that the missiles would not be based in Australia.

"It's not been asked of us, not being considered, not been put to us. I think I can rule a line under that," Morrison told reporters in Brisbane on Monday.

Information for this article was contributed by Matthew Bodner and Trevor Marshallsea of The Associated Press.