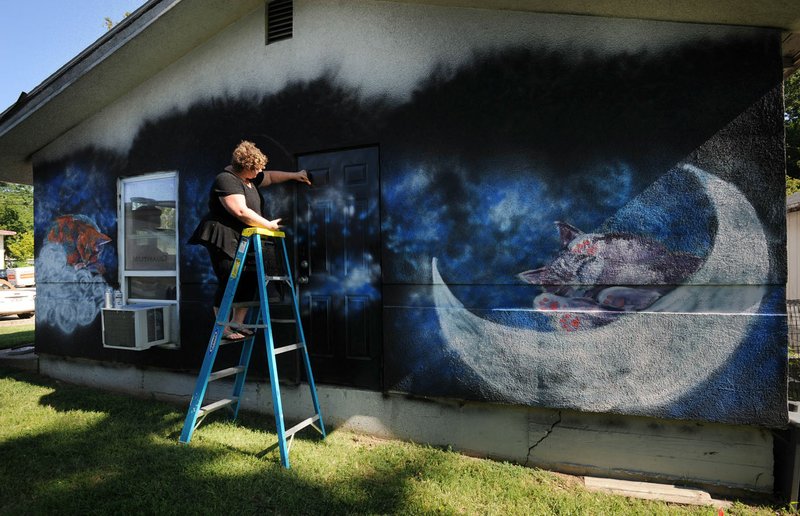 NWA Democrat-Gazette/ANDY SHUPE Shelby Nichols of Rogers paints a fish July 26 on the south wall of the Outback Cat House Rescue in Rogers. Rogers Experimental House donated the paint for the project, and Nichols donated her time. A fundraiser is set up on Facebook to raise money for Nichols and the cat house.

Fayetteville has put more public money toward murals than other regional cities. Springdale and Rogers have a few murals mostly on private property, and tourism dollars have paid for a number of Bentonville's murals. Grant money is spread throughout the region.

Americans for the Arts found nonprofit arts and cultural institutions and their audiences have a $131 million economic impact on Northwest Arkansas. Read the 2017 study:

Experience Fayetteville, the city's tourism bureau, spent $140,000 over the past two years on public art. Six of the eight projects commissioned were murals.

The bureau hired JustKids to curate the murals in 2017. The four pieces that emerged were a solar eclipse on the west wall of the former Hog Haus building at Dickson Street and West Avenue, two bears on a window sill on the east side of the One West Mountain Building near the downtown square, a jackrabbit wearing a gas mask on the west wall of architect David W. McKee's studio on Center Street near Frisco Trail, and faces inside the historic Walker-Stone home built in 1847.

The Advertising and Promotion Commission, which governs Experience Fayetteville, approved the budget for the pieces in 2016. This year, the commission allotted $35,000 for two murals.

An anamorphic image of the Greek goddess Athena by local artists Octavio Logo and Eugene Sargent is ongoing at Fenix Fayetteville on the north side of the square. Los Angeles-based artist Bumblebee wrapped up last week a three-story-tall image of a youth on a bicycle on the southwest corner of the Town Center.

Molly Rawn, executive director of Experience Fayetteville, said murals serve as a tool in the toolbox used to make the city attractive. Tourism officials track the attendance of sporting events, conferences and other events and compare the numbers to an increase in tax revenue and engagement on social media to figure the impact on the city, she said.

It's not possible to gauge the impact of murals specifically because people don't buy a ticket to see them, Rawn said. But, they're a key aspect of the overall tourism and economic landscape, she said.

The commission has a $4.6 million budget this year, compared with $4.4 million last year and $4.2 million in 2017. Half of the city's 2% hotel, motel and restaurant sales tax goes to tourism; the other half goes to parks. The $140,000 dedicated to public art is a worthy investment in the context of the entire budget, Rawn said.

City government also commissioned two murals within the past two years. The pink wall along College Avenue was commissioned for $17,367, and a mural of Native American imagery on a tunnel wall at the Tsa La Gi trail was created for $5,000. Both pieces gained administrative approval in 2017.

Generally speaking, art has a proven impact on a city's economy, said Devin Howland, Fayetteville's economic vitality director. The Northwest Arkansas Council in 2017 released a report from Americans for the Arts finding the arts spur more than $130 million in economic activity throughout the region annually.

"One might not think about public art in the realm of economic development, but I would really challenge them to think otherwise," Howland said. "One of the biggest things that we care about is place-making. That idea of place connects to so many different things we're trying to accomplish."

The aesthetic value of murals makes a place feel more welcoming, Howland said. More foot traffic to a certain part of town can serve as a catalyst to development, he said. Also, murals can contribute to a sense of vibrancy fostering interest, which helps recruit top-level talent to a city, Howland said.

Olivia Trimble, a commercial sign painter from Fayetteville, said the perception in the region seems to be shifting. Residents and businesses have gone from thinking of murals as something nice to look at to something adding value to their community, she said.

Trimble's workload has focused a lot more on murals than signs over the past year, she said. The demand is growing. Artists may compete for the same grant, but multiple options are out there to get paid for work and build a portfolio, she said.

Building a portfolio opens opportunities to gain work outside the region, and the artists come home with more money in their pockets to spend, Trimble said.

Businesses and cities more and more are recognizing murals as viable marketing tools worthy of investment, she said.

"There are materials and time and preparation and all kinds of stuff that goes into creating a large piece," Trimble said.

Property owners, grants and fundraisers pay for most of the murals in other Northwest Arkansas cities. The Downtown Springdale Alliance, for example, helps facilitate projects, including murals, said Jill Dabbs, executive director.

The alliance, along with Arts Center for the Ozarks and nonprofit SLS, formerly known as Spectrum Living Solutions, is putting on a contest for a mural at the back side of 117 W. Emma Ave., the home of coffee shop and restaurant Grace & Flavor. The alliance also helped bring the monarch butterflies to a tower at the municipal airport. The Walton Family Foundation paid for that project in 2017 with a $25,000 grant.

As downtown Springdale develops, the more opportunities there are for murals, Dabbs said.

"They kind of direct traffic, and they really make the walk shorter from Point A to Point B if there's something interesting in between," she said. "When you're in a place that feels loved and appreciated, like art does for places, it makes the place feel safer and more welcoming."

Rogers also has a burgeoning downtown, and enthusiasm for art is growing, said Karen Wagaman with the Rogers-Lowell Area Chamber of Commerce. The Walton Family Foundation and Crystal Bridges Museum of American Art this year partnered to have London, England, artist Rich Simmons paint a 50-foot-tall mural of a woman with sunglasses on the old Ice House building at 500 S. Arkansas St. A $30,000 foundation grant paid for the project.

Creative-minded people are opening businesses downtown, with woodworkers and artisans occupying their buildings, and murals inside and outside serve to attract customers, Wagaman said.

"With the creative people, I think there are more eclectic or more visually attractive spaces because they are not satisfied with just blank walls," she said.

The Walton Family Foundation puts the priority on access when considering what mural projects to support, said Joe Randel, program officer. Anyone can get to a well-placed mural, and they serve as a visual amenity to residents and visitors alike, he said.

The public also gets to be part of the process when a mural is created, Randel said. So much art is presented to an audience as a final product, developed in a studio, he said. People can follow along with every brush stroke, take pictures and oftentimes meet the artist during the creation of a mural.

The demand, and the response, to murals continues to be positive, Randel said. Part of the foundation's mission is to establish Northwest Arkansas as a national arts and culture leader, he said.

"This is just another complement to the increasingly wide variety of arts experiences and offerings that we have here," Randel said.

Bentonville last month made available on its website a map of public art in the city. Although the city hasn't spent money in recent years specifically on murals, the administration recognizes their value and the role of public art in general, said Debbie Griffin, community relations and economic development director.

The arts and culture are critical factors in attracting people to a city, Griffin said.

"We see cultural facilities as a way that we're enhancing property values, tax resources and overall profitability for our community," she said. "You're obviously enhancing quality of life, so that drives down to folks coming to our city."

Visit Bentonville, the city's tourism bureau, has spent $8,000 over the past two years to commission about a half dozen murals. The bureau also partnered with Crystal Bridges and the Walton Family Foundation on the mural of Lady Justice by Yatika Starr Fields at Cripps Law Firm, paid for with a $20,000 foundation grant.

Kalene Griffith, tourism director, said murals give visitors a varied experience to make them want to come back. Travelers consider a destination's culture, arts, heritage or history when considering where to visit, she said.

Murals can have an effect on everyone who sees them, Griffith said.

"The most important part of public art is the ability to ignite conversation and make us think differently," she said. 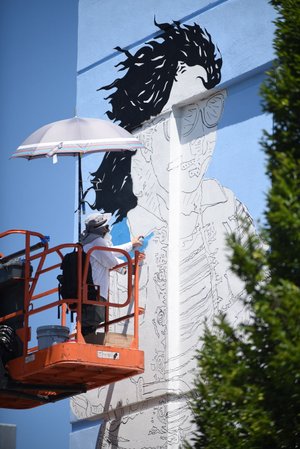 NWA Democrat-Gazette/DAVID GOTTSCHALK Bumblebeelovesyou, artist from Los Angeles, paints July 24 his mural on the Town Center parking garage at Rock Street and Block Avenue in Fayetteville. Experience Fayetteville, the city's tourism bureau, partnered with Fellow Humans to curate the project. Bumblebee's murals can be found at the Google headquarters in Venice Beach, Calif., and the Dolby Theatre in Hollywood.