Bentonville seeks to make its mark on the music map 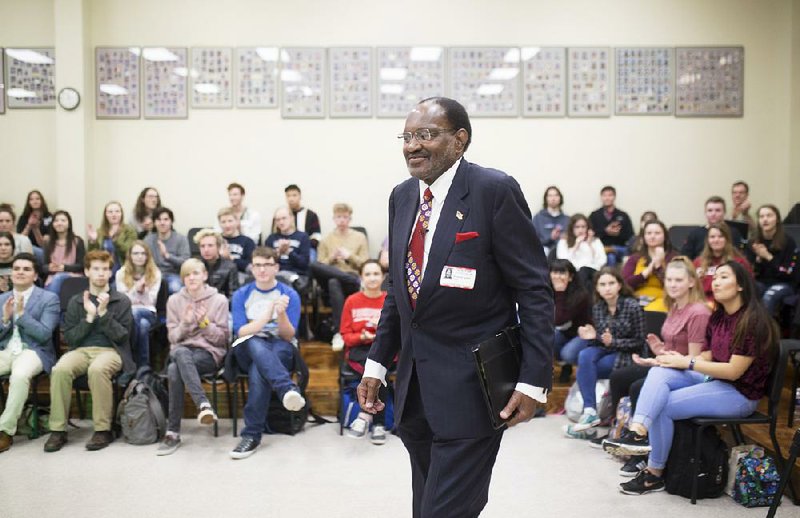 Songwriter and record producer Al Bell prepares to speak to students at Bentonville High School in 2018.

"People are talking about it, but we're not quite there where it's at the forefront," said Kalene Griffith, Visit Bentonville president.

Move to the beat

Music events are featured in Bentonville throughout the year. Special events for music and more can be found through the following local resources:

Bell helped create what became known as the "Memphis Sound" and built Stax to become the second-largest business owned by a black person in the 1970s. He's president and CEO of Al Bell Presents and was the 2018-19 Mcllroy Family Visiting Professor in the Visual and Performing Arts at the University of Arkansas.

The music industry expert is moving Al Bell Presents and his home from North Little Rock to Bentonville with his wife of 55 years, Lydia, because he said the city is playing just the right tune for becoming a breakout music destination.

Local businesses with performance venues such as Meteor Guitar Gallery, Bike Rack Brewing Co. and The Holler work with the city's Parks and Recreation Department, area recording studios and content creators. The goal is to create opportunities for collaboration and to share performance opportunities, Griffith said.

Griffith said the city benefits from Fayetteville's thriving live music scene and the success of the Walmart Arkansas Music Pavilion in Rogers, both of which draw performers to the area.

"Our story isn't come to Bentonville; it's come to Northwest Arkansas," she said.

Al Bell Presents did a two-year feasibility study to determine whether Bentonville could serve as the base of operations for a global music industry, whether the city's culture would be attractive to domestic and international music talent and whether Al Bell Presents would be able to contribute to the economic growth of the music industry as it develops locally, Bell said.

"The conclusion was a resounding yes," he said. Businesses such as Walmart have proven a global industry can be headquartered in the region, he said.

"I'm interested in coming and taking this knowledge and experience that God has given me over half a century in this business, because I understand the fundamentals," Bell said. He hopes to share those basics with anyone he can. "That's what I want to do in Bentonville. That's what's motivating and inspiring me."

Bell said he expects to announce when and where he will open the Bell Presents headquarters in Bentonville and satellite locations in Rogers and Fayetteville in the next 60 days. The businessman said he can't sing, dance or play a musical instrument, but he knows a great performer and song when he hears it.

"The hearing and the feeling is my asset, and I'm a social science marketer, so I'm always about dealing with something that's going to make people feel good," he said.

The February opening of the Momentary, which will feature an outdoor amphitheater, will add a venue the city can promote, Griffith said.

"We want to make sure we're looking at all of the venues that can have music in Bentonville and how we help promote that and tell that story," she said.

The city hopes to expand its musical presence as songwriters at The House of Songs create content and recording studios such as Haxton Road Studios give the music permanence through recording.

Collaboration allows for the city's efforts to extend beyond its borders and benefit from its location in Northwest Arkansas, which is often a thoroughfare for musicians traveling to and from larger music destinations such as Kansas City, Mo., Dallas and Memphis, Tenn., Griffith said.

"Multiple artists have stopped through and recorded or at least toured the studio upon hearing that we have this kind of facility in Northwest Arkansas," said Neil Greenhaw, owner of Haxton Road Studios. "Many have said they will plan extra time when here next time, which is always encouraging."

Haxton Road is a full-service recording studio producing songs and other content, Greenhaw said. The studio offers music production classes and has staff songwriters who write and pitch songs to record labels, artists and businesses. The studio, founded in 2011, features multiple rooms for recording. His vision is to promote the artistic experience as much as the professional product the studio delivers, he said.

Fayetteville's Cosmic Cowboy Studio caught Bell's attention when its owner, Ben Meade, told him he wanted to create the next Stax Records in Northwest Arkansas. Meade said he referred to the layout of the original Stax Records when designing Cosmic Cowboy to create a studio where something as simple as moving furniture or closing a curtain can create recording spaces.

He opened the studio in July, which is also home to Cosmic Cowboy Records. The record company anticipates producing 13 albums by April 2020, Meade said. The studio stands out, Meade said, because it's the only one in the region that's recording music using solely analog equipment. All of the content is recorded on audiotape, and there's no digital manipulation.

Meade said he hopes to foster new talent, as well as rejuvenate performers who've been marginalized over the years. Bell is creating a means to that end, Meade said, by bringing performers such as Booker T. Jones, a Musicians Hall of Fame inductee and Grammy Lifetime Achievement Award recipient, and Bobby Watson, saxophonist, composer, arranger and educator, to record at the studio.

Bentonville venues are collaborating to create a healthy, creative culture where everyone who's vested in the music scene can growing their businesses, Greenhaw said.

"We offer professional results with music production, while House of Songs is bringing in artists from all over the world who need professional production and are also providing concerts helping grow the NWA culture," he said.

Songwriters will stay at the house, a fully restored 1892 Victorian, for up to 11 days writing music, finding inspiration from their surroundings and performing locally.

Jamie Lou Connolly, Bentonville house manager, said about 200 artists have used the house as a creative space since it opened.

"On that level, we're seeing a lot of an impact here through people meeting somebody they've never met before or this is their first co-write," Connolly said.

"It was going to be sort of a bridge between that culinary district and the arts district," Campbell said of its location at Southeast C and Sixth streets. "These things that are essentially the living room of this town where people go and hang out."

Bentonville has the building blocks necessary for building a global music industry from the city, Bell said.

Bentonville will really make its mark on the industry when it creates and develops its first hit album by a breakout artist who's from the city, Bell said.

"It's a music business," he said. "There's creativity and there's art form, but it's a business."

Visitors are already traveling from St. Louis and Oklahoma City to enjoy Crystal Bridges Museum of American Art and the region's bike trails, Griffith said. Establishing the city as a music destination is just one more way to encourage them to explore.

With time, she said, Bentonville hopes to attract some of the top names in music.

"We're even going to go a little bit deeper and try to figure out those local musicians that are from Bentonville and how to tell their story to say that we're a music destination," she said.

She compared the city's strategy for becoming a biking destination.

The city had just 5 miles of trails when it began to promote Bentonville as a biking destination, Griffith said. Bentonville benefited from developing miles more of trails, as well as those established in surrounding communities as the city contributed to expanding Northwest Arkansas' biking culture.

"I use that as a prime example for every single one of our niche markets, because cycling is a great road map for us," Griffith said.

Just as they did with cycling, Visit Bentonville has been attending conferences to help determine next steps, talking through challenges with venues and the city and inviting travel writers to the area.

"A lot of times those are the best storytellers, someone who experiences our community," she said.

Campbell said venues have a responsibility to advertise and promote Northwest Arkansas, as well as define the region's sound.

Griffith said she could see the city creating an event similar to South by Southwest in Austin, Texas, an annual music festival bringing together artists, fans and music professionals from more than 60 countries. 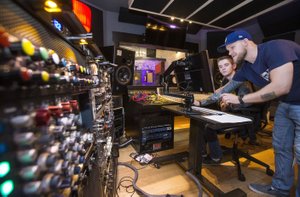 Photo by Ben Goff
Brady Allison (left), intern, and Jacob Crabb, audio/mix engineer, both of Bentonville, work June 13 during a recording session at Haxton Road Studios in Bentonville. The recording was for a single by Cameron Johnson of Cave Springs for Bike Rack Brewing Company’s record label. 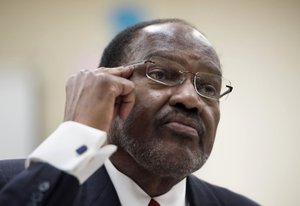 Photo by Charlie Kaijo
Al Bell speaks to students in February 2018 at Bentonville High School. Bell is the former chairman of Stax Records and former president of Motown Records. 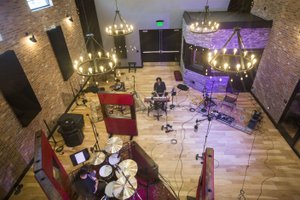 Photo by Ben Goff
A recording session is held June 13 in the main studio at Haxton Road Studios in Bentonville. The studio offers music production classes and has staff songwriters who write and pitch songs to record labels, artists and businesses. 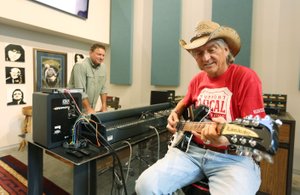 Photo by David Gottschalk
Ben Meade (right), owner of Cosmic Cowboy Studio and Cosmic Cowboy Records, listens Friday to the sound of a 12-string Rickenbacker guitar with Ted Runnels, producer, in the studio in Fayetteville. The record company anticipates producing 13 albums by April 2020, Meade said. The studio stands out, Meade said, because it’s the only one in the region recording music using solely analog equipment.

Print Headline: Bentonville seeks to make its mark on the music map