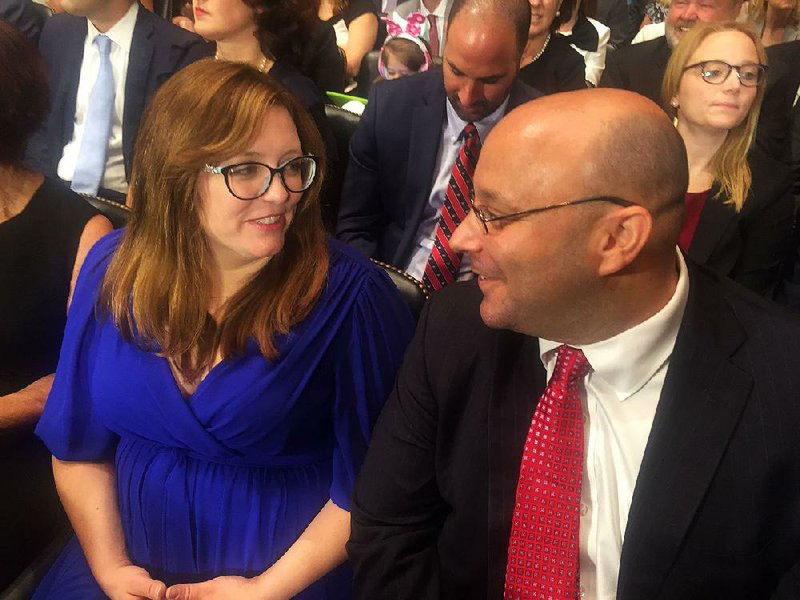 Lee Philip Rudofsky and his wife, Soraya, wait for the start of the confirmation hearing Wednesday on Capitol Hill on Rudofsky’s nomination to the U.S. District Court for the Eastern District of Arkansas.

WASHINGTON -- President Donald Trump's pick to serve on the U.S. District Court for the Eastern District of Arkansas disavowed his past advocacy regarding same-sex marriage, saying Wednesday that his previous legal reasoning had been flawed.

During his confirmation hearing, Lee Philip Rudofsky distanced himself from a February 2013 friend-of-the-court brief he had signed that challenged California's Proposition 8, a ballot measure that had stripped gay couples there of the right to marry.

Rudofsky also withdrew his support for a March 2015 amicus brief challenging the constitutionality of same-sex marriage bans. (Amicus curiae is Latin for "friend of the court.")

Backed by Rudofsky and scores of other Republicans leaders, both documents had urged the U.S. Supreme Court to side with gay couples who had been denied the right to marry.

Anti-gay statutes, the briefs argued, violate the 14th Amendment to the U.S. Constitution.

Ratified shortly after the Civil War and designed to protect the rights of newly freed people, the amendment says states cannot "deprive any person of life, liberty, or property, without due process of law; nor deny to any person within its jurisdiction the equal protection of the laws."

The Harvard Law School graduate, who moved to Arkansas in 2014, had signed the first brief while employed by the Kirkland & Ellis law firm in Washington, D.C.

He signed the second one while working as an assistant general counsel for Walmart Inc.

Shortly after adding his name, Rudofsky joined the staff of Arkansas Attorney General Leslie Rutledge as the state's solicitor general.

Rudofsky had been identified, on both briefs, as "Deputy General Counsel, Romney for President, 2012."

"Those were not when I was solicitor general. I did not sign those as a lawyer. Those were signed in my personal capacity," he said.

Before joining Rutledge's staff, Rudofsky's understanding of the 1868 amendment had been limited, he said.

"When I joined those amicus briefs, I was not an expert in 14th Amendment jurisprudence. Since then, as solicitor general, I've become much more familiar with that area of law and I have to say, if I had it to do over again, as a legal matter, I would not have signed those briefs."

In Hollingsworth v. Perry (2013), the U.S. Supreme Court declined to overturn a lower-court decision striking down Proposition 8. California, which had the authority to appeal the ruling, had declined to do so, the high court noted.

Backers of the ballot measure lacked standing, on their own, to pursue the litigation, the 5-4 ruling declared.

In Obergefell v. Hodges (2015), the Supreme Court agreed with the 14th Amendment claims.

"The right to marry is a fundamental right inherent in the liberty of the person, and under the Due Process and Equal Protection Clauses of the Fourteenth Amendment couples of the same-sex may not be deprived of that right and that liberty," the court said in a 5-4 ruling.

Striking down same-sex marriage bans in Arkansas and across the country, the majority stated: "Since same-sex couples may now exercise the fundamental right to marry in all States, there is no lawful basis for a State to refuse to recognize a lawful same-sex marriage performed in another State on the ground of its same-sex character."

"The briefs argued for giving civil marriage rights to same-sex couples," she said. "Did you just tell Sen. Graham that you regret signing them and that you would not do so today?"

"Senator, let me ... say first, obviously, that if I'm so lucky to be confirmed as a district court nominee, I will of course, fully and faithfully follow the Supreme Court's ...," Rudofsky said before Hirono cut him off.

"Yes, but what I'm ascertaining is whether you actually said this to Sen. Graham right now, that you regret signing on to these two amicus briefs?" she asked.

"Obviously, I will fully and faithfully follow Obergefell as a district court nominee," Rudofsky said. "But the answer to your question is, what I explained was, when I joined these amicus briefs. I was not an expert on 14th Amendment jurisprudence. Since that time, I've become much more familiar with this area of the law as solicitor general, and if I had it to do over again, as a legal matter, I wouldn't join the arguments in those briefs."

Hirono also quizzed Rudofsky about his defense of Arkansas' restrictive abortion statutes. A 2013 law banned most abortions after 12 weeks; federal courts struck down the law as unconstitutional.

In reply, Rudofsky said the ban had been passed and largely litigated before he became solicitor general.

Upon his arrival, Rudofsky said, Rutledge had assigned some of the work to him and he had complied.

Noting that he was representing the state, he said he had sought to uphold Arkansas laws.

"I zealously advocated for my client and I did so to the best of my ability. Those are my client's positions and I represented them," he said.

The Bentonville resident served three years as solicitor general before returning to Walmart in 2018, this time as senior director of global anti-corruption compliance team.

If given a lifetime appointment to the bench, Rudofsky said he would be "fairly and fully and faithfully following Supreme Court precedent."

That includes "Roe and all its progeny," he said, a reference to Roe v. Wade, the 1973 Supreme Court decision that legalized abortion nationwide.

Rudofsky was one of three judicial nominees facing questions from the committee Wednesday morning; the other two were from Kentucky and Alabama.

Most of the day's questions were reserved for Kenneth Charles Canterbury Jr., Trump's pick to lead the Bureau of Alcohol, Tobacco, Firearms and Explosives. Republicans and Democrats alike spent most of their time quizzing him about Second Amendment matters.

Arkansas' two Republican U.S. senators, John Boozman of Rogers and Tom Cotton of Dardanelle, had both encouraged the White House to appoint Rudofsky to the bench.

Both lawmakers showed up Wednesday for the start of his confirmation hearing so they could welcome him and testify on his behalf.

In an interview, Boozman predicted Rudofsky would be an effective judge.

"He's very well-qualified. He's done about everything that you can do within the legal circles," Boozman said.

If confirmed, Rudofsky "will interpret the laws as the people tried to write them," he added.

"Lee is exactly the type of jurist we want in Arkansas -- intelligent, impartial [and] committed to the rule of law," Cotton said.

In that position, Rudofsky defended an Arkansas law that conflicted with the Obergefell ruling, taking it all the way to the U.S. Supreme Court.

Quoting a phrase from Obergefell, the Supreme Court's majority said the Arkansas law denies same-sex couples "the constellation of benefits that the States have linked to marriage."

The court reached its decision in a summary reversal, opting not to hear oral arguments or request lengthy legal briefs before ruling.

The ruling in the case, Pavan v. Smith, came on June 26, 2017, the second anniversary of the Obergefell decision.

The arguments he raised, ultimately, were unpersuasive, she said.

She hopes the Senate rejects the nomination.

"He's a very nice man. But that job requires someone that will follow the Constitution of the United States," she said.

With their party in the majority in the Senate, Republicans are confident that they'll have the votes to confirm him after the August recess.

"I think he's going to do very well," Graham said. "Both senators gave him glowing reviews. All the people in the bar system in Arkansas said nothing but positive things about him. He's, quite frankly, one of the more qualified people I've seen, so I think he's going to get a lot of support. I think Republicans are going to be there for sure and hope some Democrats will vote for him because he deserves their vote."