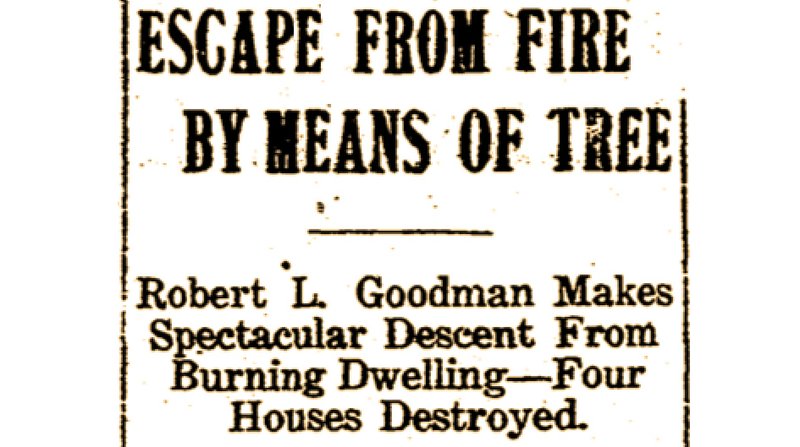 Robert was tall and slender, with gray eyes and black hair.

We know this from his 1918 draft registration card.

We don't know what Roxie looked like; but she was born in 1882 in Rhea County, Tenn., the year before he was born six counties to the west, at Nashville.

His middle name was Lee. So he was Robert Lee Goodman.

He married a Daughter of the American Revolution. Mrs. Roxie M. Brown Goodman appears in the Daughters' 1919 Lineage Book as a descendant of Capt. John Brown and of James McElwee. McElwee was a soldier under Col. John Sevier at King's Mountain in North Carolina. This Capt. Brown was on the N.C. Continental Line; he enlisted as an ensign in 1775 and rose to captain in the Carolina Dragoons.

That's a very specific piece of information to know about someone who died in 1976, someone we cannot know. So why are we reading about this couple today? Because 100 years ago, Robert did quite a scandalous thing. It landed them both in the headlines of the Arkansas Gazette, Arkansas Democrat and other Little Rock newspapers.

What was that Thing? Be patient while I try to figure it out.

Here are some things we can say that we know, from U.S. Census records and the newspapers.

■ We know Roxie and Robert had moved to Little Rock by 1910 and had a (mortgaged) house at 1112 W. 33rd St., an area called Braddock's Addition. The 1910 Census listed his occupation as bookkeeper in a dry-goods store.

■ The Democrat reported that Roxie threw an elegant little dance party in December 1911 in honor of her sisters, Dixie and Mabel, who were visiting for Christmas.

■ On June 27, 1912, Roxie and the couple's little girls were away when their two-story house caught fire at 2 a.m. Neighbors discovered the fire and, thinking no one was home, called the fire department without trying to rouse Robert.

As he told the Democrat's Rocks From the River of Life column five years later, he was reading in bed, engrossed by a mystery novel with a female heroine. When he smelled smoke he rushed to the door, but too late:

The stairway was a mass of flames, and there was no escape by that route. Robert looked out the window, calculated the distance to a neighboring tree, grabbed the family cat and jumped to it.

He and the cat survived their fall. But sparks ignited three other cottages, and all four houses were destroyed, a loss estimated at $12,500.

From this same Democrat column, we learn that Robert had been in the Army. He served in the Philippines as a captain during the Spanish-American War. "A little thing like having a flock of Aguinaldo's bolo throwers or bushwhackers make a midnight attack became such a frequent occurrence that it was a matter of course." But he never got used to lizards hiding in his shoes.

Now some things we can't be sure of.

Where did the burned-out family land? One possible place is 111 Johnson St. in the Stifft Addition of Little Rock — a two-story house that Roxie eventually bought. 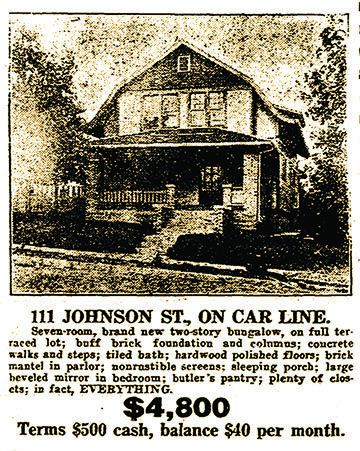 In April 1912, the Bracy, Beauchamp & Neimeyer Realty Co. obtained building permits for the creation of six two-story houses in Stifft's Addition, aka "the West End." Two would stand on Summit Avenue and four on Johnson Street. An ad in the Gazette enticed ambitious buyers:

"Home, Sweet Home," the blessed shrine of precious memories. The very word rings with laughter and echoes with song. It glows with love; it is the open gate to paradise; it is the vestibule of heaven; it is glorious to live in a beautiful home, as the burnished crest of the cloud reflects in golden arcs the splendors of the sun, so does the Home reflect the life within.

Furthermore, these Homes appealed to the highest type of elegance and refinement. Why? Because the builders "combine elegance and taste; cost with quality, and our financial arrangements are such that you can own a Home as cheaply as you can rent."

The house had a fully terraced lot one block from the streetcar line; the foundation and columns were buff pressed brick; it had concrete walks and steps, beautifully tinted rooms, a tiled bath, a large beveled mirror in the bedroom, a butler's pantry, closets -- "in fact, every possible convenience that could be desired in a brand new home."

111 Johnson was still being advertised for sale in late summer. Hold that thought.

■ In September 1912, The Quality Shop opened at 606 Main St., promising to be the most strictly up-to-date millinery establishment in the city. It specialized in imported hats and was under the direct management of Robert, who was president of the company and had been "prominent in the millinery trade" for three years. So he was a bookkeeping hat dealer. OK.

Two important innovations will mark the opening of this store, a rest room for the ladies and the fact that they will cater to the white trade exclusively.

In advertising, the shop's motto was "The Store for White People. ... A shop where she can visit without coming in contact with negroes."

And Robert was the president of this shop? Robert Goodman is not an unusual name, and there were other people named Goodman in town. But when The Thing happened in 1919, news reports indicated he was that milliner. So ... Robert. Robert Lee.

■ In January 1913, Robert was appointed guardian of the estates of his two younger brothers (see U.S. Census of 1900), Roger and Leonard.

■ In February 1913, the office of Owens & Fones advertised for sale the house at 111 Johnson St., noting it had only been occupied since August by an owner who was contemplating leaving the city.

Hmm. This couple had needed a house in late summer 1912, when 111 Johnson St. was sitting on the market.

Did the real estate company allow the Goodmans to live in the house after the fire, so the house wasn't empty? Did they begin buying it then? Or did they buy it from a friend at Owens & Fones?

A few years later, he was cashier and credit officer for Fones Brothers Hardware, which makes an earlier association with Fones plausible.

Whatever was going on, the house wound up in Roxie's name, which would prove fortuitous for her. But I get ahead of myself.

By February 1913, The Quality Shop was insolvent. And Robert sued it in July 1914. Suing his own company? Its receiver was one R.M. Goodman — Roxie M. Goodman — who was collecting from debtors and paying the company’s creditors.

And yet this is not The Thing — The Thing that Robert did to land them at the top of news columns in April 1919.

For that part of the story, click right here: PART 2.

Print Headline: Was Robert a Goodman or not?