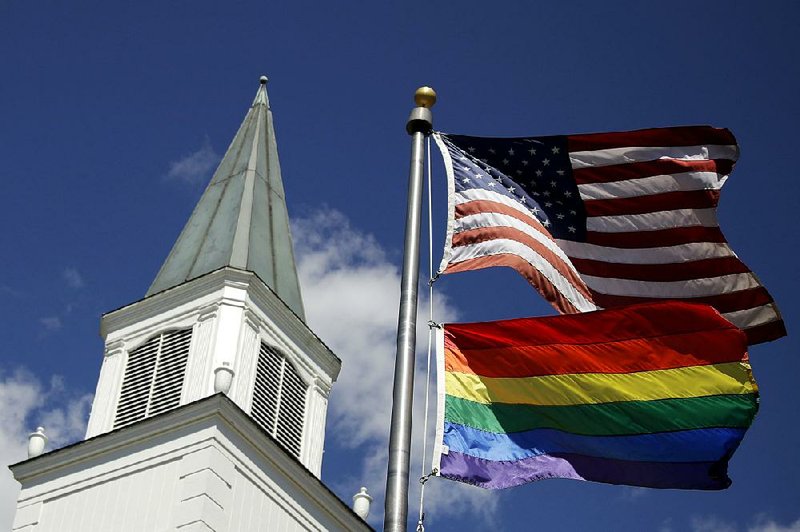 A gay-pride flag flies with the American flag in front of Asbury United Methodist Church in Prairie Village, Kan., last week. While the church has moved to strengthen bans on same-sex marriage and disallow gay and transgender clergy, dissenting members have called for an upsurge of resistance.

Conservatives welcomed the decision and said key elements of the policy, called the Traditional Plan, could take effect in January. Among liberal and centrist opponents of the plan, there was dismay. One group, Reconciling Ministries Network, called for an upsurge of resistance.

The Traditional Plan was adopted in February on 438-384 vote by delegates at a special United Methodist Church conference in St. Louis. Most U.S.-based delegates opposed that plan and preferred LGBT-inclusive options, but they were outvoted by U.S. conservatives who teamed with most of the delegates from Methodist strongholds in Africa and the Philippines.

The nine-member judicial council, at the close of a four-day meeting in Evanston, Ill., ruled that some aspects of the Traditional Plan -- mostly related to enforcement of its rules -- were unconstitutional under church law. But the council upheld the bulk of the plan, clearing the way for its implementation in January.

He suggested that Methodists opposed to the plan should start negotiating to leave the church and form a new denomination that would allow them to adopt LGBT-inclusive policies.

Opponents of the Traditional Plan will have a chance to overturn it at the United Methodist Church's next general conference in May 2020. But Lambrecht said he agreed with other analysts who predict the church's conservative bloc will be even stronger then.

An alliance of Traditional Plan opponents, calling themselves UMC-Next, has been holding meetings to discuss the best path forward for those who share their views.

Its leaders say one option would be for centrists and liberals to leave en masse to form a new denomination. Under another option, opponents of the Traditional Plan would stay in the United Methodist Church and resist from within, eventually persuading conservatives that they should be the faction that departs.

Formed in a merger in 1968, the United Methodist Church claims about 12.6 million members worldwide, including nearly 7 million in the United States. It is the largest mainline Protestant denomination in the U.S.

While other mainline denominations have embraced gay-friendly practices, the United Methodist Church still bans them, though acts of defiance by pro-LGBT clergy members have multiplied. Many have officiated same-sex weddings. Others have come out from the pulpit.

Enforcement of the bans has been inconsistent, but the Traditional Plan aspires to beef up discipline against those engaged in defiance.

Under rules upheld by the judicial council, bishops are prohibited from ordaining "self-avowed homosexuals," while clerics who perform same-sex weddings could be suspended without pay for a first offense and ousted from the ministry for a second offense.

Under the ruling, individual churches could disaffiliate with the United Methodist Church if two-thirds of the church community agrees, and if the church meets certain financial requirements.

The Reconciling Ministries Network, which supports LGBT inclusion, called its supporters "to repeatedly state your dissent, to support the work of resistance by United Methodist seminaries, to continue to write open letters and visibly be in solidarity with those on the margins."

"We call upon the Church to repent of the sin of homophobia," it said. "Now is the time to rise and resist."

Many Traditional Plan opponents already are expressing their dissatisfaction. Some churches have raised rainbow flags in a show of LGBT solidarity. Some are withholding dues payments to the church administration in protest.

The Human Rights Campaign, a national LGBT-rights group, said the judicial council's ruling "is deeply disappointing for countless LGBTQ Methodists, including young people and their families, who are yearning for a welcoming church family."