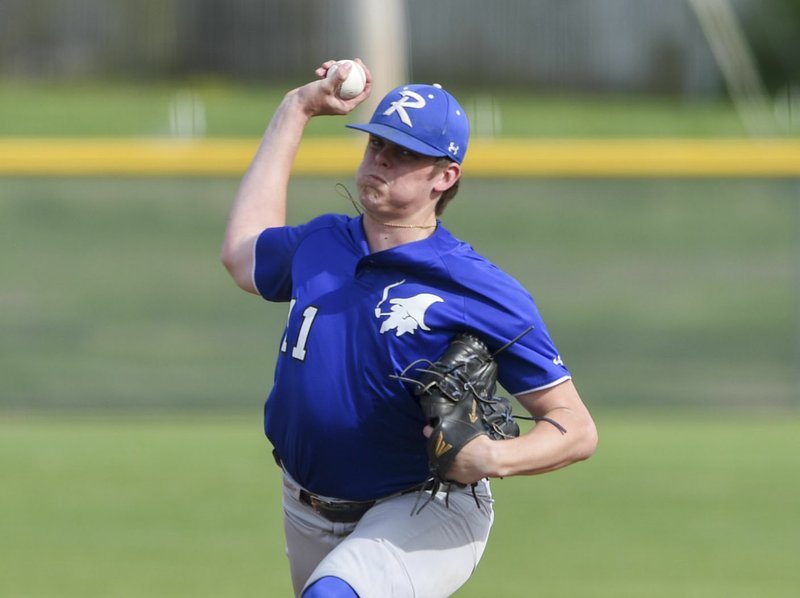 The Wildcats have struggled to score runs, particularly in 6A-West Conference play this season, but they banged out 14 hits and blanked Rogers High 7-0 at Veterans Park.

Lead-off man Hunter Wood went 3-for-3, hit a solo home run and scored three times to pace the Har-Ber offense. He said the Wildcats were more aggressive at the plate.

"It's just good to see us swing it," Wood said. "Usually we take until we get two strikes or something. We finally started swinging at our pitches early in the zone and early in the count. Obviously, it showed that it did good things for us."

"It's pretty typical of the weather early," Bradley said. "The weather was bad and just in the last week we got up in the 60s and 70s and the bats come alive. You can just tell the difference in the baseball off the bat.

"It was good to see back-to-back and the first time we swung it in a conference game all year."

Har-Ber (19-6, 6-5 6A-West) broke open a tight game with a four-run top of the fifth. Wood led off with a double and scored on Clay Burtrum's RBI-single. Blake Adams followed with a two-run home run off Rogers starter Matthew Watson.

That was more than enough for the Wildcats with Adams on the mound.

The hard-throwing right-hander allowed just three hits in pitching the complete game. He struck out nine, walked two and only threw 91 pitches.

Bradley said it was nice to give Adams some runs to work with since he's been under added pressure in many of his starts because of a struggling offense.

"You keep adding some runs, it just makes him tougher," Bradley said. "He's had to pitch a lot of one-run games and he hasn't been able to just relax and pitch. We were also able to keep his pitch count down, which was huge especially this time of year.

He's kinda been pushed the last three weeks. Hopefully, it just rejuvenates him for next week. We've just got to keep moving forward. We can't control what anybody else does. We've just got to do what we can do and build momentum to the state tournament."

Tanner Strickland accounted for two of Rogers' three hits with a pair of doubles. The Mounties (14-9, 7-4) remained only a game behind first-place Bentonville West in the 6A-West Conference standings.

Bentonville scored 10 runs in the second inning to blow the game open as the Tigers rolled past Springdale at the Tiger Athletic Complex.

Everybody in Bentonville's starting lineup had at least one hit as Karson Coffee drove in three runs with three hits and fell a home run short of the cycle. Luke Bennett had three hits and two RBIs, while four other Tiger batters had two hits.

Devin Hearn pitched a five-hitter through five innings and struck out five with no walks.

Sam Turner added two hits and drove in three runs for the Purple Bulldogs. Fayetteville took advantage of seven walks and a costly Heritage error in the big inning.

The Pointers scored three runs in the top of the first inning aided by three Wolverine errors and held off a late charge to earn the 6A-West Conference win.

Trevor Johnson pitched the complete game, allowing three runs (one earned) on six hits over seven innings. He struck out two and didn't walk a batter.

Joey Aden had two hits for West. Dylan Carter took the loss, allowing four runs (two earned) on six hits over seven innings of work. He struck out 16 and did not walk a batter.

Cailey Cochran allowed just two hits and struck out 11 to lead the Tigers to a run-rule shutout in a 6A-West makeup game Monday.

Cochran needed just 67 pitches and did not walk a batter in a dominating performance.

She got all the run support she needed in the first inning when Bentonville (12-5, 9-1) scored a pair of runs, but the Tigers did not let up, putting the game away with a nine-run fifth inning.

The Wolverines built a big early lead, but had to hold off Rogers at the end in a 6A-West makeup game Monday at Veterans Park.

Hallie Wacaser had a huge day at the plate for West, crushing a pair of home runs and driving in four runs. She also added a stolen base. Alyssa Cordell added a two-run double for the Wolverines. Emma Wood earned the win in the circle.