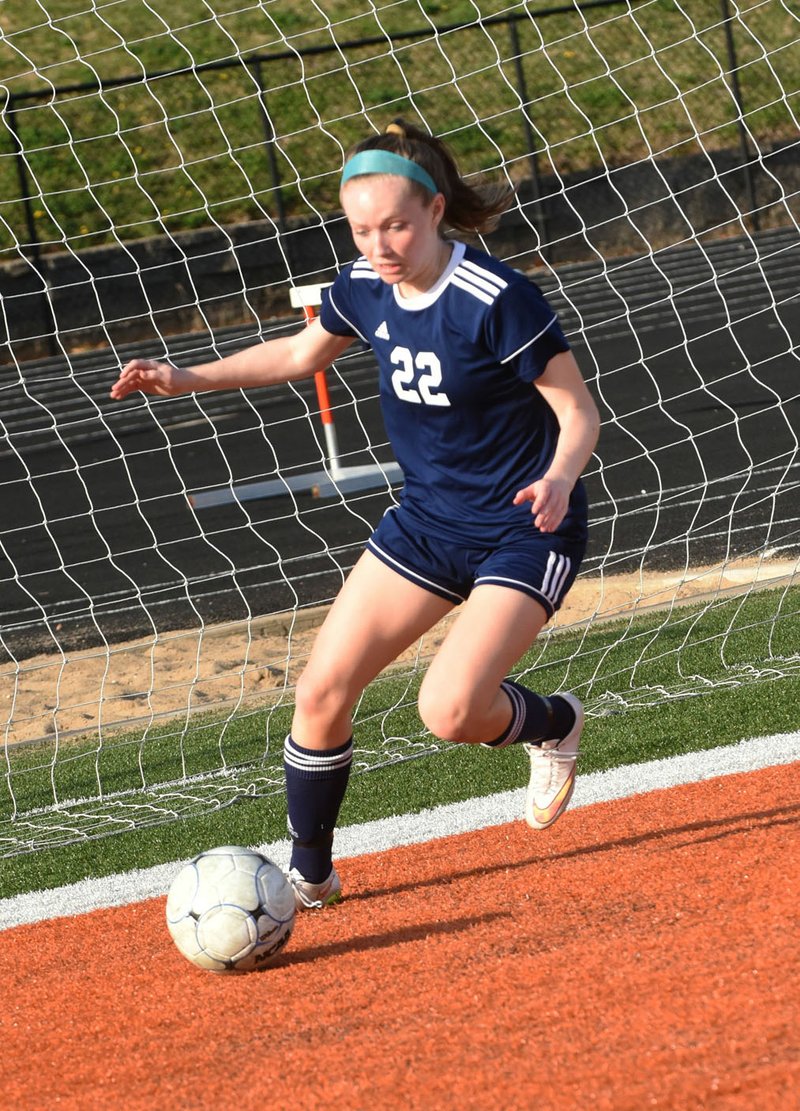 NWA Democrat-Gazette/FLIP PUTTHOFF Rogers Heritage forward Pam Seiler has put multiple injuries during basketball season behind her and is off to a strong start for the Lady War Eagles soccer team this season.

ROGERS -- Basketball season was a struggle for Pam Seiler because of injuries this season, but it's sure hard to tell watching her play soccer.

The junior has a team-high 14 goals along with five assists to help Rogers Heritage (9-7, 5-5 6A-West) put itself in position for a state tournament berth as the season comes down the home stretch.

"She has brought some excitement to our team," Heritage coach Skye Stover said. "She's a great player to watch. She scores goals, leads by actions. She's a very positive person."

But even Seiler, who earned all-conference honors in basketball, agreed that optimistic personality was challenged a bit as she suffered an ankle injury only a few games into the season. And just when she was starting to put that behind her, Seiler collided with an opposing player and suffered a broken nose.

"It was horrible," Seiler said. "Basketball was so hard, but I just tried to push through and just tried to stay positive through it all. I knew it would be easy to just shut down and like, 'Next year I'll get it.'

"Just the experience playing the games I knew would be better for me, no matter how well I do."

Stover was impressed with her demeanor facing adversity.

"I remember talking to her, just checking on her, and she's like 'Hey, I broke my nose.' I was like 'Oh my God!' But she didn't seem to let it bother her."

Seiler said there's not been any carryover to soccer, neither mentally nor physically.

"I just see them as two separate worlds," Seiler said. "Soccer is just so different, like a clean start. I just feel like I'm back starting where I left off in soccer last year."

The 5-foot-5 speedster enjoyed a great season as a sophomore, scoring 22 goals to go with 11 assists playing an outside mid position. But Stover decided to move her to forward this season, and she's not missed a beat.

Stover's seen her mature both as a player and a team leader since she's started for the Lady War Eagles since her freshman year.

"She's handled it well, taken it in stride," Stover said. "She's managed to score goals as a freshman, scoring goals as a sophomore and come back from a basketball injury and done even more this season. She's a big part of our success this season.

"She's connected with her teammates really well. Playing since her freshman year, she's got a good connection with everybody."

That maturation showed in basketball, too, as Seiler tried to set aside her personal feelings for the sake of the team.

"I would get down on myself," Seiler said. "But I knew in a team environment I could show that to anyone else. It would just bring everyone else down. I just had to say, 'Everything's OK,' and just try to do the best for the team."

She's grown up physically, too. Seiler credits the weight program for basketball for increasing her strength, which has also helped in soccer.

"I got pushed around a little easier last year," Seiler said. "Now I have to hold back."

Stover has also seen her become a more confident player even though she doesn't always acknowledge it.

"She's a lot more aggressive," Stover said. "The other piece of that is confidence. I see when she's one-on-one with a defender, she just shook her and kept going. I saw her smile a little bit.

The two-sport standout knows she wants to play in college, but she's unsure which sport at this point. Stover wants her to follow her heart.

"There's no doubt in my mind she can play at the next level in soccer, if that's what she chooses to do."

Right now she just wants to stay healthy and finish strong, hopefully in the state tournament.