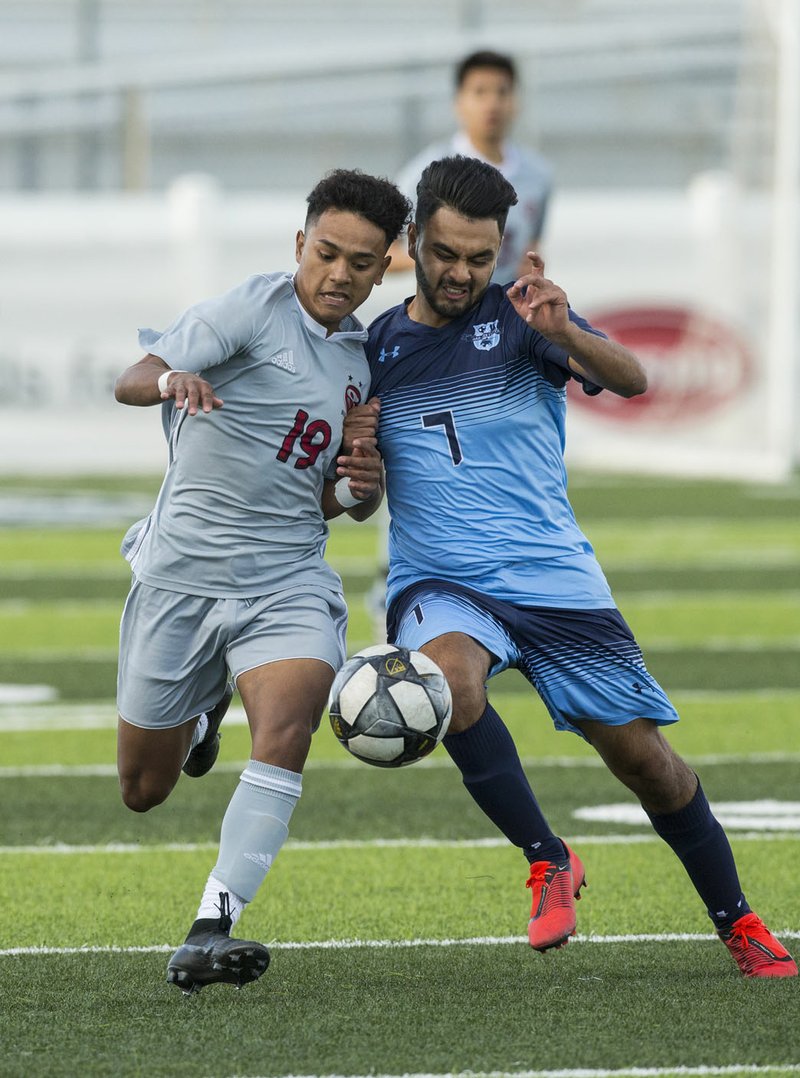 NWA Democrat-Gazette/BEN GOFF @NWABENGOFF Irvin Sotero (19) of Springdale battles for the ball vs Esteban Fuentes (7) of Springdale Har-Ber in the first half Friday, April 19, 2019, at Har-Ber's Wildcat Stadium in Springdale.

Maldanado scored two goals in a span of six minutes to put the Bulldogs up 2-0 early in an eventual 3-1 win in the 6A-West Conference match in Jarrell Williams Bulldog Stadium.

The all-state senior's goals were huge as the Wildcats kept Springdale's leading scorer, Jose Vega, from scoring in a conference match for the first time this season.

"He was one of the players we could count on tonight to finish the opportunities that he was getting," Springdale coach D.J. Beeler said. "He had a great game. He's been big for us all year, and he showed up for us in a big moment."

Springdale senior Nelson Barroso added another goal for good measure in the second half after he scored off a rebound from a shot attempt by teammate Irvin Sotero.

Vega, who had averaged two goals a game in conference before Friday, drew a good amount of attention from Har-Ber's defense, which gave the Bulldogs (11-2, 10-0 6A-West) an opportunity to show they're not a one-dimensional team, Beeler said.

"Even if our leading goal scorer comes out and doesn't score any goals, it doesn't mean we're not going to be able to put points up," Beeler said. "I was happy with how everybody else played around him."

Maldanado's night ended early after he landed hard on his side, going for a header off a corner kick that would have given him a hat trick on the night. He walked off the field under his own power but did not return to the game after Beeler decided to rest him.

"He had a little bruise on his hip that was bothering him before the game, and he happened to land just right on that spot. He just needed to come off a bit and jog around," Beeler said.

With the win, the Bulldogs extended their winning streak to 11 games as they remain perfect in conference play, but the team has some areas it needs to work on by Beeler's standards.

Beeler thinks his team could have done a better job of getting more scoring opportunities if they had played faster by limiting their touches on the ball, he said.

"That speed of play, speed of thought was lacking a bit tonight," Beeler said. "It's not untypical to see something like that in the Har-Ber game because the kids kind of get caught up in the atmosphere and the rivalry game. Sometimes they don't play up to their standards and their abilities. We can do better."

He thought his team did well keeping the Wildcats (8-7, 4-6) from getting too many set pieces, which was a focus for Beeler in the rematch. However, Har-Ber's Thomas Ayala scored the team's lone goal off a free kick from about 30 yards out.

The Mounties won their fifth straight match by blanking the Wolverines on Friday night.

Angelina Diaz had two goals to lead Bentonville to a victory over Heritage at Gates Stadium.

Gisselle Estrada scored a pair of goals to lift the Wildcats to a shutout win against crosstown rival Springdale.

Estrada, who has signed to play soccer at the University of the Ozarks, built on a 1-0 Har-Ber lead with her two goals.