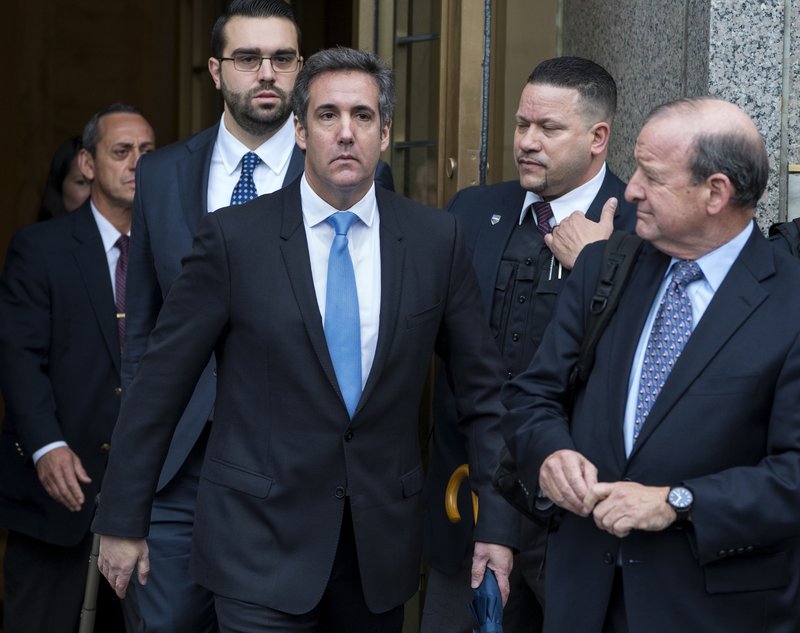 NEW YORK -- Days after the FBI raided Michael Cohen's home and office last year, President Donald Trump called his former lawyer and urged him to "stay strong" and "hang in there" in the face of the intensifying investigation.

That call was among several assurances Cohen says he received that the White House would have his back so long as he "stayed on message," special counsel Robert Mueller said in his long-awaited report on his investigation. The redacted 448-page document was made public Thursday.

Mueller's team said it found evidence to suggest that the president intended to discourage Cohen from cooperating with federal authorities, noting among other things that after Cohen flipped on his boss, Trump branded him a "rat" and publicly suggested Cohen's family members had committed crimes.

The Mueller report, though blacked out in places, offers a window into the quiet support Cohen received from Trump before he turned on his longtime boss and began cooperating with federal prosecutors.

In the months after the April 2018 raid against Cohen by the FBI, Trump associates sought to assure him that the president intended to take care of him. Someone associated with the Trump Organization -- whose name is blacked out of the report -- told Cohen that "everyone knows the boss has your back." Another time, a friend of the president's reached out to tell Cohen that he was with "the Boss" at Mar-a-Lago and that Trump said "he loves you" and not to worry, according to the report.

Cohen "believed he needed the power of the President to take care of him," he told Mueller's team, noting his legal fees were still being paid at the time by the Trump Organization.

But Cohen grew increasingly worried and asked one Trump attorney "what was in it for him," the report says. Cohen "discussed pardons with the President's personal counsel and believed that if he stayed on message he would be taken care of."

By June 2018, however, he had broken with the president, saying in an interview that he needed to put family and country ahead of his loyalty to Trump.

Trump reacted by lashing out at him and later, in what Cohen regarded as a threat, accused Cohen family members of illegal acts.

"The evidence concerning this sequence of events," the Mueller report says, "could support an inference that the President used inducements in the form of positive messages in an effort to get Cohen not to cooperate, and then turned to attacks and intimidation to deter the provision of information or undermine Cohen's credibility once Cohen began cooperating."

Some of Cohen's statements to Mueller's team were blacked out of the report. But Cohen attorney and spokesman Lanny Davis tweeted Thursday that Cohen has "7 days, 70 hours, + 100 pages of what #TeamMueller knows and can fill in the bulk of the redactions."

Cohen himself tweeted: "Soon I will be ready to address the American people again ... tell it all ... and tell it myself!" It wasn't clear how or when he would do that.