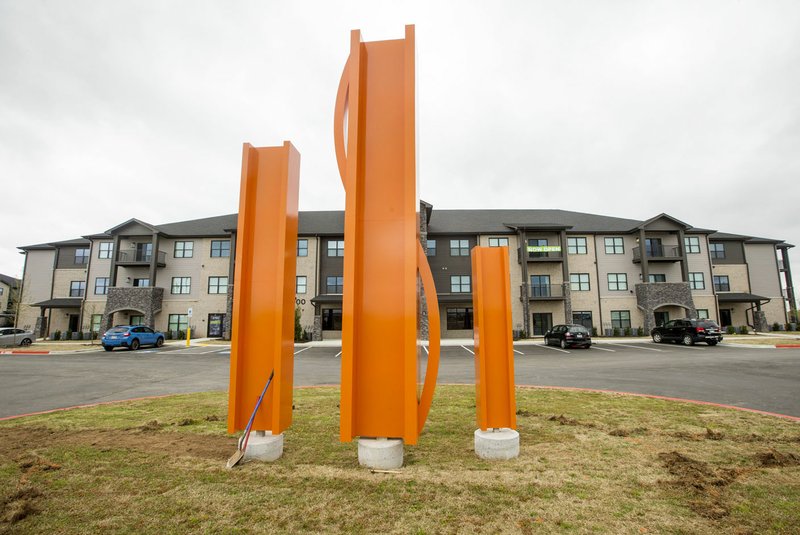 NWA Democrat-Gazette/BEN GOFF @NWABENGOFF A sculpture stands at the entrance Wednesday at I Street Modern Apartments in Bentonville. The complex near the Bentonville Community Center opened in February. The Fayetteville-Springdale-Rogers Metropolitan Statistical Area area grew from 538,412 in 2017 to 549,128 in 2018, according to the Census report. The region was the 43rd fastest growing metro area by population and 27th fastest growing area by percentage of population growth.

FAYETTEVILLE — Northwest Arkansas continues to grow, presenting the region with both challenges and opportunities.

The U.S. Census Bureau reported this week Benton and Washington counties added about 10,285 people in 2018, an average of about 28 people per day. The two counties grew at a rate of 2.1 percent over 2017.

Northwest Arkansas’ growth in the last year is a continuation of a trend. The area’s population was 463,204 in 2010 and has grown by 85,924 since then, an increase of about 18.5 percent, according to Census Bureau figures.

Rick Shortt, with Infiniti Management Services in Springfield, Mo., said his company is among those who see the opportunities in Northwest Arkansas and hope to take advantage of them. The company started in the area managing the La Quinta Suites hotel in Bentonville and is now branching out with the I Street Modern Apartments in the same city. Shortt said the company has 120 units open and will have 238 when the next phase of the project is completed.

Shortt said the increasing population and diversity of growth drives demand for living space offering more than simple shelter. The apartments offer easy access to the Razorback Greenway and the Bentonville Community Center.

“The community is becoming very active in the arts and culture,” Shortt said. “Folks moving into the area are highly interested in an active lifestyle, biking and running and the outdoors culture.”

Karen Minkel, home Rregion program director with the Walton Family Foundation, said the foundation strives to be a catalyst in seeking ways to preserve and enhance the area’s quality of life. She said based on observation and discussion with people in other areas, Northwest Arkansas is working to stay ahead of problems others have encountered.

“We ask people what they wish they had tackled 20 years ago,” Minkel said. “Housing and transportation always top the list.”

Minkel said transportation has been identified as a top priority of residents in surveys done by the foundation, with a mass transit system being one of the most desired opportunities. She said the Razorback Greenway is another component of an improved transportation system and the foundation is working with area cities on changing street designs to encourage multiple forms of transportation.

Minkel said it’s important the area’s governmental leadership has been involved in and supportive of long-range planning.

“You don’t become a great place to live unless you’ve had decades of great leadership,” she said.

Mervin Jebaraj, director of the Center for Business and Economic Research at the University of Arkansas, said much of the growth can be linked to the economy. He said 64 percent is from people moving into the area.

Nelson Peacock, president and CEO of the Northwest Arkansas Council, said Northwest Arkansas remains an attractive place for people to live and work. He said the strength of the economy, with Walmart, Simmons Foods, Tyson Foods and other growing companies, coupled with the University of Arkansas, brings a lot of people to the area.

“We think growth is great,” Peacock said. “You ether grow or you don’t. Northwest Arkansas is and has done a lot of things right.”

Peacock said the council, local governments and other entities have worked on projects ranging from transportation to housing and health care to education.

“We have to invest in infrastructure projects before the need is visible, before potential problems become too bad,” he said. 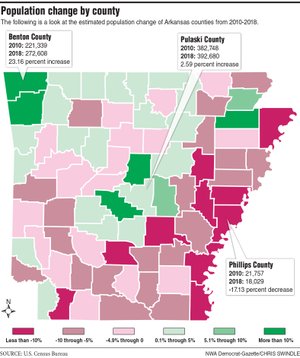 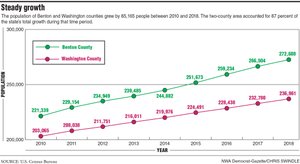