In one case, justices found that Circuit Judge Stacey Zimmerman erred by permanently placing two children with foster parents rather than with the children's grandparents in Indiana.

The grandparents completed the process of approval under the Interstate Compact on the Placement of Children and unequivocally expressed the desire to care for the children, according to Thursday's opinion.

Zimmerman found it was in the children's best interest they remain with the foster parents because, in her opinion, uprooting and moving them would lead to irreparable emotional and mental damage, according to court documents.

"We hold that the court's stated reasons for rejecting the grandparents as a permanent placement for the children are clearly erroneous," justices wrote. The Appeals Court sent the case back to Zimmerman to review in light of the opinion.

In the second case, justices found Zimmerman erred in finding Josue Tovias was the father of a child and then terminating his parental rights after finding the child had been neglected.

"On the record as presented to us, we must reverse because there is no evidence that Tovias's status as a 'legal father' falls within the statutory definition of a parent for purposes of the aggravated-circumstances ground for termination," justices wrote.

Justices said there was no underlying evidence to support Zimmerman's finding.

"As a result, we cannot tell on what basis the court made its finding of Tovias's status as 'legal father' or how much significance to place on it," justices wrote.

Tovias, 28, and Melissa Miranda, 33, are accused in Washington County Circuit Court of handcuffing and starving an 8-year-old boy. Both have pending criminal cases.

Miranda handcuffed the boy to furniture and didn't let him have food, according to a police report. Police said they found the boy to be extremely thin and he had bruising consistent with handcuffs and cuts on his back.

Tovias denied the child abuse, but Miranda said he knew about the abuse, according to the report.

Both are charged with kidnapping, aggravated assault on a family or household member, domestic battery and tampering with physical evidence. Miranda is also charged with endangering the welfare of a minor. 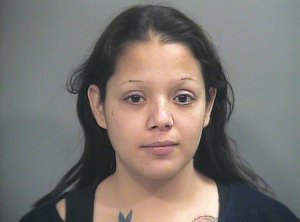