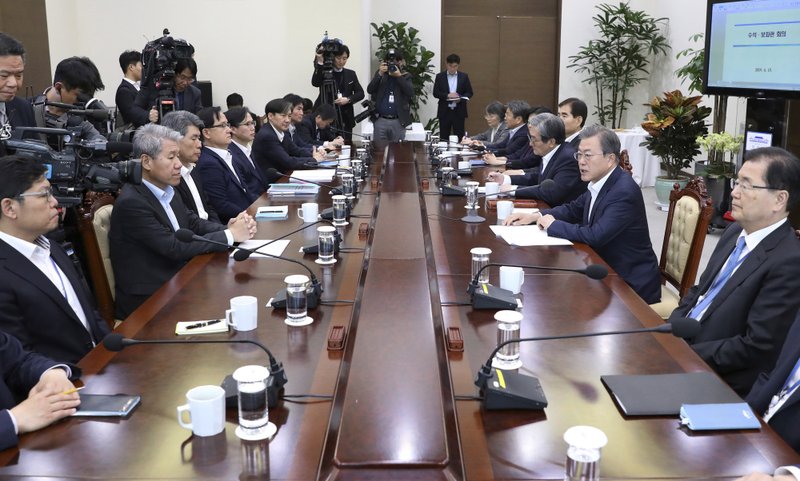 Moon's comments came after Kim issued his harshest criticism yet of South Korea's diplomatic role last week, accusing Seoul of acting like an "overstepping mediator" and demanding that it diverge from Washington to support the North's position more strongly.

Moon met Kim three times last year and also brokered nuclear talks between North Korea and the U.S. after tensions created by the North's nuclear and missile tests and the exchange of war threats by Kim and President Donald Trump.

But there are fears in Seoul that the hopeful developments of 2018 could be undone because of the mismatched demands between Washington and Pyongyang over sanctions relief and disarmament, which have derailed a high-stakes Trump-Kim meeting and prolonged a stalemate in negotiations.

It's difficult for Moon to make further progress on inter-Korean engagement without some level of sanctions relief, which Washington says won't come until Kim commits to verifiably relinquishing his nuclear facilities, weapons and missiles. Kim has shown no signs that he's willing to give away an arsenal he may see as his strongest guarantee of survival, and Pyongyang apparently has been trying to drive a wedge between Washington and Seoul by appealing to Moon's enthusiasm for engagement.

"Whenever North Korea is ready, we hope that the South and North could sit down together and hold concrete and practical discussions on ways to achieve progress that goes beyond what was accomplished in the two summits between North Korea and the United States," Moon said in a meeting with senior aides.

Moon's office did not provide a timeline on when his fourth summit with Kim might take place.

Moon met with Trump last week in Washington, where they agreed on the importance of nuclear talks with North Korea but did not announce a specific plan to get the stalemated negotiations back on track.

Moon spent the past year making aggressive efforts to stabilize South Korea's hard-won detente with North Korea and improve bilateral relations. He also lobbied hard to set up the first summit between Kim and Trump last June, when they agreed to a vague statement about a nuclear-free Korean Peninsula without describing how or when it would occur.

Trump and Kim met again in Vietnam in February, but the summit collapsed over what the Americans saw as excessive North Korean demands for sanctions relief in exchange for limited disarmament steps.

Moon has said it is Seoul's utmost priority to prevent nuclear negotiations between the U.S. and North Korea from derailing, and there is speculation that he will soon announce a plan to send a special envoy to Pyongyang, North Korea's capital, in an effort to rescue the talks.

In their third summit in September, Moon and Kim agreed to reconnect the Koreas' railways and roads, normalize operations at a jointly run factory park in the North Korean border town of Kaesong and restart South Korean tours to the North's scenic Diamond Mountain resort, voicing optimism that international sanctions could end and allow such projects.

But Moon's call for partial sanctions relief to create space for the inter-Korean projects and induce nuclear disarmament steps by North Korea has led to a disagreement with Washington, which sees economic pressure as its main leverage with Pyongyang.

In a speech delivered to North Korea's rubber-stamp parliament on Friday, Kim said he is open to a third summit with Trump but set an end-of-year deadline for Washington to offer mutually acceptable terms for an agreement.