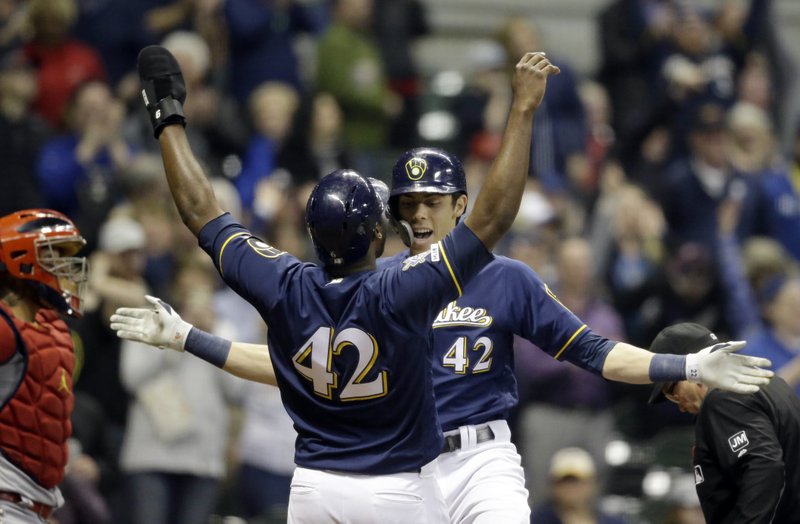 Yelich, last season's National League MVP, hit his first three-run home run to cap a six-run second inning. After St. Louis tied it with three runs in the sixth, Yelich answered in the bottom half with a towering three-run blast to right off Mike Mayers (0-1) to make it 9-6.

Yelich capped off his night with his eighth home run this season, going deep to lead off the eighth. He also lined out in the first and was walked intentionally in the fourth.

Junior Guerra (1-0) worked 1 2/3 innings for the victory. Josh Hader struck out the side in the ninth after allowing Marcell Ozuna's sixth home run to open the inning.

In the sixth, the Cardinals loaded the bases with one out. Guerra entered and his first pitch to Paul Goldschmidt sailed past catcher Yasmani Grandal for a run-scoring passed ball. Goldschmidt and Ozuna followed with RBI singles to tie it.

The Brewers erased a 2-0 deficit with six runs in the second off Dakota Hudson. Mike Moustakas opened with his sixth home run. Eric Thames, Ben Gamel, pitcher Freddy Peralta and Lorenzo Cain each singled to account for two runs. Yelich then lined a 1-0 pitch over the wall in left-center.

St. Louis made it 6-3 in the third on Yadier Molina's RBI double.

The Cardinals took a 2-0 lead in the first on consecutive one-out home runs by Goldschmidt and Paul DeJong. Goldschmidt has hit five of his seven home runs this season at Miller Park, including a three-home run game March 29.

Cain robbed Matt Carpenter of a two-run home run with a grab above the center field wall to end the second inning.

CUBS 7, MARLINS 2 Willson Contreras hit his sixth home run, drove in three and reached base four times, and Chicago thawed out to beat Miami.The temperature in Chicago was 33 when the Cubs' game Sunday against the Angels was snowed out, and it was 84 with the retractable roof open for the first pitch at Marlins Park. Yu Darvish (1-2) struck out eight in a season-high 5 2/3 innings.

ORIOLES 8, RED SOX 1 Dwight Smith Jr. hooked a two-run home run into the first row of seats down the right field line and drove in four, leading Baltimore to victory in Boston's annual Patriots' Day game. Baltimore salvaged a split of the four-game series. It had lost nine of its previous 11 games and was 4-21 in its last 25 against Boston. Chris Davis also hit a two-run home run -- much further into the right field bleachers -- and Renato Nunez had three hits with an RBI single. Dan Straily (1-1) rebounded from a rough debut start with Baltimore, giving up a run on two hits in five innings.

RANGERS 12, ANGELS 7 Joey Gallo hit a home run and grounded a tiebreaking single to the vacant spot at shortstop against the shift, helping Texas beat Los Angeles in Mike Trout's return after missing three games with a groin injury. Trout, the designated hitter while the club waits a little longer before putting the two-time American League MVP back in center field, went 0 for 2 with three walks. Shin-Soo Choo, who had three hits, hit a home run to lead off the third for his first of the season. Asdrubal Cabrera matched Gallo for the team lead with his fifth home run, a two-run shot for an 11-4 lead in the sixth.

WHITE SOX 5, ROYALS 4 Welington Castillo atoned for an error with a two-run home run in the eighth inning, and Chicago rallied to beat Kansas City. Castillo's poor throw on Billy Hamilton's steal in the seventh helped set up Whit Merrifield's tiebreaking sacrifice fly. But Castillo came up big after Tim Anderson led off the eighth with a double against Brad Boxberger (0-3), sending an opposite-field drive to right for his first home run of the season.