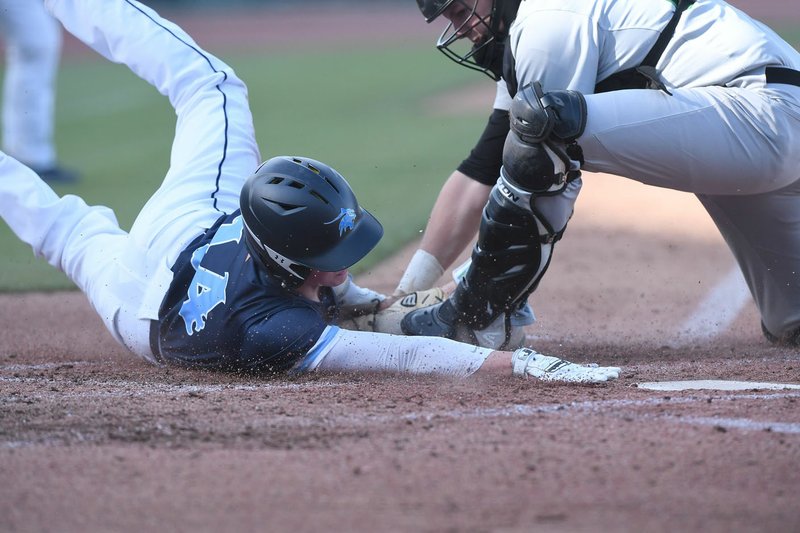 That feeling translated to the game, as the Arkansas signee struck out the first two batters he faced and gave up only two hits Monday in a 2-1 victory over Van Buren (13-10, 3-7) in Arvest Ballpark.

"I had all four pitches working for me today," Adams said. "They had some long at-bats, so my pitch count went up, but my curveball was probably my best thing tonight."

Adams struck out seven and walked four in the winning effort. He had a no-hitter through four innings before Van Buren junior Jackson Hurst drilled a high two-seam fastball into left field. Hurst went on to score that inning, marking Adams' only real mistake on the day.

"We came back later that inning and got a double play, which was really nice," Adams said. "That really got us out of a mess."

The Wildcats (17-5, 6-4 6A-West) plated a run in each of the first two innings to build a comfortable lead until the fourth. A one-out sacrifice fly from senior Kirby Jenkins marked the team's first run, while an errant second-inning throw to first base brought home another. Scoring early runs is key to winning conference games, said Har-Ber coach Ron Bradley.

"The whole season, in our conference, is one-run, two-run games," Bradley said. "I said it today, a team that finishes fifth or sixth in our conference has a chance to win a state championship. That's how slim margin there is between six to one."

Van Buren starter Trevor Johnson played the entire game and played well in the losing effort. In the bottom of the sixth, Wildcats junior Charlie Acuff hit a line drive right back at Johnson, who made an impressive catch before nonchalantly tossing the ball to his third baseman.

Still, the early lead gave Adams the confidence that he could outduel his fellow senior.

"It's always easier to pitch with a lead, and going in with a 2-0 lead, it's definitely a confidence booster, and I can trust my stuff a little more," Adams said.

Marc Sussman's two-out, two-run bloop single snapped a 5-5 tie and lifted Rogers to a win over Bentonville at the Tiger Athletic Complex.

Sussman's third hit came after Rogers (11-7, 6-3) drew three consecutive walks against Payton Allen, who relieved Bentonville starter Devin Hearn in the sixth. Jace Bray, who relieved Sussman on the mound in the sixth, preserved the lead and picked up the win by only allowing a single to Karson Coffee in the bottom of the seventh.

The Mounties had 10 hits as McKaden Templeton, Jay Watson, Will Lawling each added two hits. Keaton Cloyd had three hits and drove in three runs for Bentonville (13-7, 5-4), while Coffee had two hits and scored twice.

The Wolverines jumped out to a 9-2 lead and cruised to the 6A-West Conference win to claim sole possession of first place.

Joey Aden, Seth Schonauer, Maddux Thornton and Hunter Mayes had two hits each for West (14-7, 7-2 6A-West). Schonauer, Mayes and Aden drove in three runs apiece. Mayes was also outstanding defensively, doubling off a base runner and coming up with three huge catches, including a running grab near the left-field fence to end the Heritage fourth with the tying runs on base.

Dylan Carter picked up the win, allowing two runs (one earned) over three innings. He struck out three and walked two.

Heritage (5-13, 2-7) scored five runs in the fourth inning to pull within 9-7, but Aden's three-run home run highlighted a four-run fifth as the Wolverines regained control.

Josh Llewellyn and Ryan Carlson had three hits each for the War Eagles, while Ben Pollock drove in three runs.

The Red Bulldogs scored six runs in the bottom of the first inning and never looked back to notch the big 6A-West Conference win.

Springdale (8-15, 2-7) combined five singles with two Fayetteville errors against starter Luke Davenport to put the Purple Bulldogs back on their heels early and they never recovered. The Red'Dogs had 10 hits in the game, all singles.

Will Mueller, Austin Wages and Alex Bowers had two hits each for Springdale. Mueller drove in three runs and Wages drove in two.

Tanner Sargent picked up the win, pitching 5 2/3 shutout innings, allowing six hits while striking out five and walking one. Dylan Rollins got the final out of the sixth inning to complete the run-rule victory.

Jeff Sinacore and Andrew Walker had two hits each for Fayetteville (13-8, 6-3).