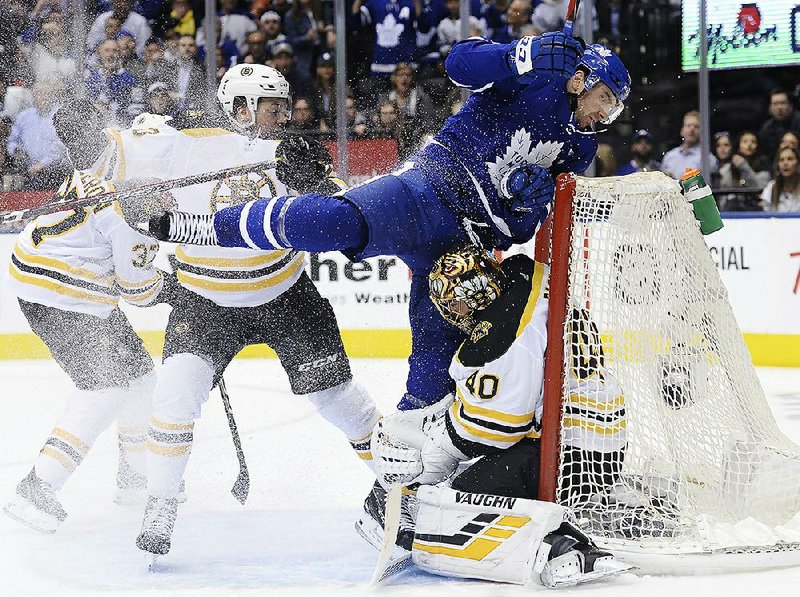 TORONTO -- Auston Matthews scored his first goal of the playoffs and set up another as the Toronto Maple Leafs beat the Boston Bruins 3-2 on Monday night to take a 2-1 lead in their best-of-seven Eastern Conference quarterfinal.

Andreas Johnsson, also with a goal and an assist, and Trevor Moore provided the rest of the offense for Toronto. Frederik Andersen made 34 saves.

David Krejci and Charlie Coyle scored for Boston. Tuukka Rask stopped 31 shots in front of a crowd of 19,611.

The Maple Leafs won the series opener 4-1 last Wednesday in Boston before losing by the same score Saturday.

Game 4 is Wednesday night in Toronto.

Less than an hour before puck drop, the Maple Leafs learned center Nazem Kadri had been suspended for the rest of the series for his vicious cross-check to the head of Bruins winger Jake DeBrusk in the third period of Game 2.

This one was scoreless following a spirited first period in which the Maple Leafs upped their physical play after getting dominated in Game 2. But the offensive floodgates opened with five goals in the second.

Toronto took a 1-0 lead at 2:38 when Moore poked a loose puck home for his first career playoff goal after Morgan Rielly's initial shot rattled around between Rask's pads. The Maple Leafs' fourth line of Moore, Frederik Gauthier and Tyler Ennis were effective all night, with a couple of grinding shifts in the offensive zone.

Boston replied 52 seconds later when Krejci chipped a bouncing puck past Andersen with DeBrusk also on the doorstep.

Rask stopped John Tavares later in the period, but the Maple Leafs center was checked into the Bruins goalie by defenseman Charlie McAvoy. Rask went tumbling backward, but stayed in the game after stretching out his neck and left shoulder.

Matthews put Toronto back in front just 12 seconds after David Backes was whistled for high-sticking on Kasperi Kapanen, taking a feed from Johnsson and netting his first beyond an outstretched Rask to send the crowd into a frenzy at 10:12.

Promoted to the first power-play unit because of Kadri's suspension, Johnsson made it 3-1 with his first career playoff goal with 2:48 left in the period when he roofed a backhand over Rask after a nice feed from Tavares as Toronto connected for a second time on the man advantage after going 0 for 4 in the first two games.

Matthews, who had just two points against the Bruins in the 2018 postseason, picked up the second assist to match his total from last year.

Boston responded on a power play of its own with 37.3 seconds left in the period when Coyle collected a puck off the end boards to score his second of the series.

The Bruins got a power play five minutes into the third when Maple Leafs defenseman Nikita Zaitsev fired the puck over the glass for a delay-of-game penalty, but Toronto's penalty kill held firm against a man advantage that has connected in every game this series.

RALEIGH, N.C. -- Rookie forward Warren Foegele had two goals and an assist, Petr Mrazek earned his fourth career postseason shutout and the Carolina Hurricanes won their first home playoff game in a decade in a rout of the Washington Capitals.

Dougie Hamilton also scored two goals, Brock McGinn had a late goal and an assist and Jaccob Slavin had two assists as the rapid-fire Hurricanes outshot Washington 45-18 to cut the defending Stanley Cup champions' lead to 2-1 in the best-of-seven series.

Mrazek finished with 18 saves in his fifth career playoff victory -- the last four have been shutouts.

Braden Holtby stopped 40 shots for Washington, which had its six-game postseason winning streak snapped. The Capitals were shut out in the playoffs for the first time since 2017.

The first postseason game in Raleigh since 2009 -- when Carolina was swept by Pittsburgh in the Eastern Conference final -- was a physical, borderline violent affair, headlined by Alex Ovechkin's first career playoff fight, one that sent Hurricanes rookie Andrei Svechnikov's head crashing onto the ice and knocked him out of the game.

Foegele's first goal was a bit of a fluke -- he was locked up in front of the net and was clipped by Justin Faulk's shot from the point that got past Holtby -- but there wasn't anything cheap about his second one.

He parked to the right of Holtby, took a feed from Sebastian Aho past a sliding Matt Niskanen and snapped the puck past the goalie to make it 2-0 with 13:51 left in the second.

DALLAS -- Mikael Granlund scored on a wrist shot from just inside the blue line with 8:19 left and the Nashville Predators, after blowing a two-goal lead, beat the Dallas Stars to take a 2-1 lead in their best-of-seven Western Conference playoff series.

Granlund, acquired in a trade with Minnesota in late February, got the puck from Dante Fabbro after Kyle Turris won a faceoff against Stars captain Jamie Benn.

Rocco Grimaldi scored in his second game in a row for the Predators, and Filip Forsberg had a perfectly timed play for a goal.

Pekka Rinne made 40 saves for Nashville, including one with the goalie twisting to his left for a stop when Dallas had a 5-on-3 advantage about midway through the second period. That was one of seven shots the Stars had during their 21/2 consecutive minutes with an advantage, including 1:29 with two extra skaters.

Tyler Seguin and Mats Zuccarello scored for the Stars, who played their first playoff home game in three years. American Airlines Center is less than 5 miles from the Cotton Bowl Stadium where they will play the Predators outside in the Winter Classic on New Year's Day next season.

Game 4 is Wednesday night in Dallas.

LAS VEGAS -- Mark Stone had three goals and two assists, and the Vegas Golden Knights beat the San Jose Sharks to take a 2-1 lead in their first-round playoff series.

Max Pacioretty had a goal and an assist, defenseman Shea Theodore had three assists and Marc-Andre Fleury made 25 saves.

The Golden Knights and Sharks scored 15 times while splitting the first two games in San Jose.