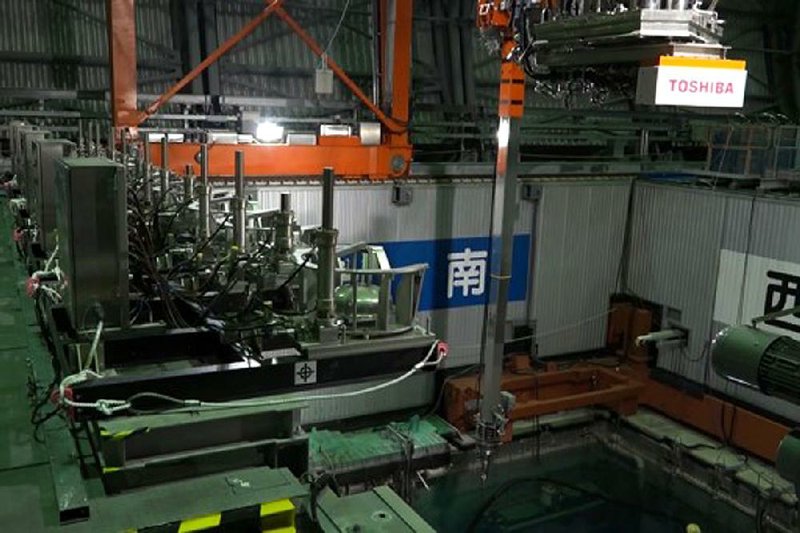 This image released by Tokyo Electric Power Co. shows the operation floor above a cooling pool at Unit 3 of the Fukushima nuclear power plant in Okuma town, Fukushima prefecture, northeastern Japan, on Monday.

The operator of Japan's ruined Fukushima nuclear power plant began removing radioactive fuel rods Monday at one of three reactors that melted down after an earthquake and a tsunami in 2011, a major step in the long-delayed cleanup effort.

Thousands of former residents have been barred from the area around the plant for years as crews carried out a large-scale radioactive-waste cleanup in the aftermath of the worst nuclear disaster since Chernobyl. The process of removing the fuel rods from a storage pool had been delayed since 2014 amid technical problems and high radiation levels.

The plant operator, Tokyo Electric Power, said in a statement that workers Monday morning began removing the first of 566 spent and unspent fuel rods stored in a pool at the plant's third reactor. A radiation-hardened robot had first located the melted uranium fuel inside the reactor in 2017.

"Thanks to their training, the work has been going smoothly," Tomohiko Isogai, the director of the nuclear plant, was quoted as saying by the Japanese broadcaster NHK, referring to workers involved in the fuel cleanup.

There are 1,573 fuel rods still inside the storage pools of the three reactors that melted down in 2011, the Kyodo News agency reported Monday. Tokyo Electric said that the cleanup at the third reactor would take just less than two years, and that it planned to eventually remove uranium from all three reactors.

Workers at the third reactor are using a remotely operated crane to remove the fuel rods in a process that occurs underwater to prevent radiation leaks. The rods are dangerous partly because the pools are not enclosed, and they could be vulnerable in the event of another major earthquake.

Tokyo Electric's announcement comes a few days after people began moving back to Okuma, a town near the ruined plant, after the authorities said that radiation levels there had fallen to a safe level.

Last year, Japan acknowledged for the first time that exposure to radiation at the site had caused a death. The announcement came after a man who had worked mostly at the plant over 28 years died of lung cancer.

The authorities had previously acknowledged that three other Fukushima workers developed leukemia and thyroid cancer after working on the plant cleanup. But experts are divided on whether exposure to radiation can be linked to illnesses among children who lived near the plant.