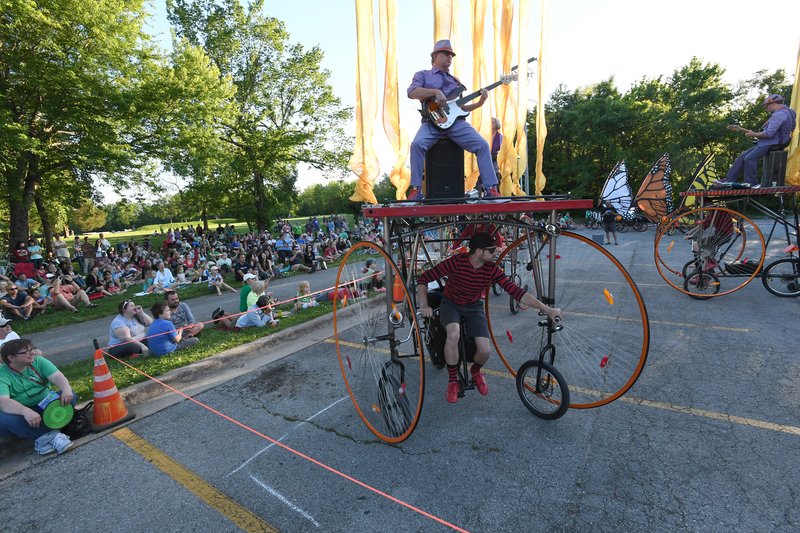 File photo/NWA Democrat-Gazette/J.T. WAMPLER Cycle Sonic performs their original chamber rock music on human-powered stages during Artosphere: Arkansas' Arts and Nature Festival on May 14, 2017 at Walker Park in Fayetteville. The festival received $15,000 this year from the Advertising and Promotion Commission to put toward marketing.

FAYETTEVILLE -- Some longstanding and first-time events will get a boost with tourism dollars this year.

The Advertising and Promotion Commission on Monday agreed to invest $99,625 in spring grants to 16 events. The commission doles out grants to help local programs twice yearly, once in the fall and once in the spring.

The Advertising and Promotion Commission awarded the following grants for events:

This spring the commission received $229,890 worth of requests for 24 events. Molly Rawn, executive director of the city's tourism bureau Experience Fayetteville, said audience reach, economic or cultural impact and what specifically the money would be used for all factored into the evaluation of each request.

Half of the city's 2-percent hotel, motel and restaurant sales tax goes to tourism. The other half goes to parks.

New events this year include BikeNWA's UCI C2 Cyclocross Race to be held Oct. 5-6. UCI, known in the United States as the International Cycling Union, will host its 2022 Cyclocross World Championship at Millsaps Mountain in Fayetteville. Cyclocross involves a short outdoor course that requires riders to get on and off bikes to traverse steep hills, trails and obstacles.

Organizers are trying to get the word out about the sport by hosting events leading up to the championship, said Paxton Roberts, BikeNWA executive director. The $15,000 the organization received for the event will go toward marketing, both to build excitement locally and to advertise to a broader national audience, he said.

"We expect people to come to this race, because we're having the 2022 world championships, who may not otherwise," Roberts said.

TheatreSquared also for the first time will put on a Christmas in Fayetteville program. Visitors will be able to purchase a ticket to see "A Christmas Carol" and get a hotel room at a packaged, discount rate, said Joanna Sheehan Bell, director of marketing and communications with TheatreSquared.

The play will be put on at TheatreSquared's new facility, which is under construction at West Avenue and Spring Street and set to open in August. Christmas in Fayetteville will coincide with the annual Lights of the Ozarks event at the downtown square, Bell said.

"T2 has always done a holiday show, and we're very excited to revisit this magical story with all the technical capabilities of the new facility," she said.

The $12,625 TheatreSquared received will go toward the discounted package and marketing, Bell said.

The Walton Arts Center's Artosphere festival also received $15,000 to put toward marketing. The festival has been around for 10 years with a goal to provide free or low-cost programming at several venues throughout Northwest Arkansas, said Jennifer Wilson, public relations director with the Walton Arts Center.

Wilson described the event as mission-driven, the mission being to bring accessible arts to the region. The festival, happening June 10-29, has an estimated cost of $519,000, she said.

"In this instance, it is not a money-maker," Wilson said. "It's something that we do purely because it's the right thing for us to do as a performing arts center."