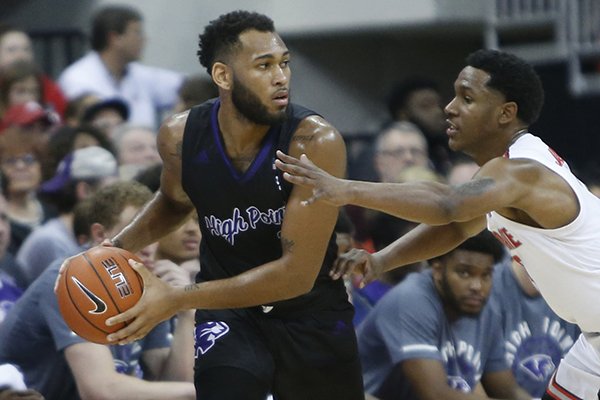 Jon Rothstein of CBS Sports reported Tuesday that Proctor will officially visit Arkansas on May 3-5.

Proctor, 6-3, 215 pounds, averaged a school-record 24.4 points per game as a senior at Harrisburg High School in Pennsylvania and holds the career record of 1,689 points.

He initially signed with Iona and played in 32 games, averaging 5.3 points while playing 15.2 minutes per game as a freshman to help Iona advanced to the NCAA Tournament.

Proctor announced his plans to transfer in May 2016 and eventually landed at High Point, where he played two seasons. He was on the Big South All-Academic Team and named second team Big South after starting 24 of 25 games and averaging 16.4 points, 3.6 rebounds, shooting 43 percent from the field and 38 percent from the 3-point line in his sophomore season.

The Hogs are expected to host forward Jeantal Cylla of the University of North Carolina-Wilmington this weekend while George Mason guard Jaire Grayer plans to visit the Razorbacks on April 22.

Guard Haanif Cheatham, 6-5, 195, is working on a date to visit Arkansas. He played this season at Florida Gulf Coast before a shoulder injury forced him out of action.

Highly recruited 6-6 guard Kyree Walker of Hillcrest Prep in Phoenix is also expected to make an official visit to Arkansas.

ESPN rates Walker a 5-star recruit, the No. 4 small forward and No. 13 overall prospect in the 2020 class. It appears likely he will reclassify and be immediately eligible to play next season.