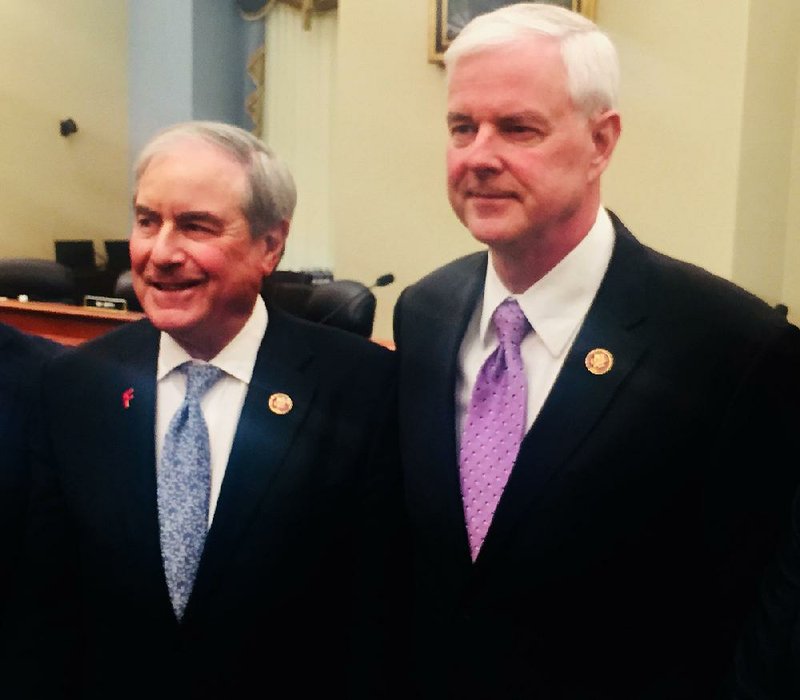 WASHINGTON -- Passing a budget in the U.S. House of Representatives will be difficult because of stark differences within the Democratic Party, U.S. Rep. Steve Womack, R-Ark., said.

A proposal to raise discretionary spending caps narrowly made it out of the House Budget Committee this month by a vote of 19-17 after three Democrats voted against their own leadership's proposal.

But opposition from the party's progressive caucus ultimately derailed the legislation altogether. Democratic leadership, facing open revolt, opted not to proceed with a vote on the House floor.

Womack, the ranking Republican on the budget committee, said the Democratic divisions may continue to stymie efforts to advance budgetary matters in the lower chamber.

Womack, who used to wield the committee gavel, isn't gloating about the majority party's predicament.

"I honestly kind of feel sorry for them because they are in an unprecedented state of disarray," Womack said. "They are terribly dysfunctional right now."

Last year, with Womack as chairman, Republicans on the committee passed a budget resolution, only to see it bottled up by then-House Speaker Paul Ryan, R-Wis.

This time, the blueprint may be scuttled without even receiving a committee hearing.

Yarmuth told The Washington Post that he is "not particularly hopeful" that House Democrats would release a budget blueprint at all.

Republicans struggled to present a united front when Womack was chairman; challenges from the House Freedom Caucus weren't infrequent.

"If you contrast what Republicans have been dealing with for the last eight years versus where the Democrats are today, we understand what conflicts within ranks can do because we've had it as well," Womack said.

The Republican split, Womack said, "was more of a three-headed monster."

Working together, moderates and right-wing Republicans who were "right, but not crazy right" were able to outmaneuver the Freedom Caucus, Womack said.

"We were always able to thread the needle," he said in an interview Thursday.

The Democrats, on the other hand, are in two opposing camps, Womack said.

"It's a classic case of the Blue Dog Democrat vs. the very progressive Democrat. The Blue Dogs are typically defense-oriented, national-security-oriented, and mindful of deficits and debt," Womack said.

The progressive caucus, he said, is reluctant to shift extra dollars to the Pentagon because that is "money that could be going to their favorite programs."

On Tuesday, after a vote on the spending caps was canceled, Yarmuth said in a written statement that efforts to reach a deal must continue.

"The most important task in front of us right now is to raise sequestration caps to stop extreme cuts from being implemented, ensuring that we can make the needed investments in our national and economic security. There are further conversations we must have to reach consensus between the wings of our caucus, left and right. But we all have a responsibility to govern and obligations to the American people, so our work continues," he said.

On Wednesday, House Speaker Nancy Pelosi, D-Calif., and House Majority Leader Steny Hoyer, D-Md., expressed confidence that they will be able to reach a spending agreement with their Republican counterparts.

Under the terms of the Budget Control Act of 2011, sharp spending cuts will automatically be triggered if lawmakers and the president are unable to agree on spending levels.

The fault lines within the Democratic Party won't be disappearing, Womack predicted.

"It's a clash that's going to challenge the leadership of the Democratic Party for the remainder of their majority, however long that may be," he said.

"It's kind of easy to be united when you're in the minority. Really, all you've got to do is vote against what the other side's trying to do. You know, try to put a stick in their eye on different things," he said.

Meanwhile, the national debt is continuing to balloon. It surpassed $22 trillion earlier this year. The budget deficit, just for fiscal 2019, is on pace to surpass $1 trillion.

Tax cuts, passed by a Republican-controlled Congress and signed into law by a Republican president, have exacerbated the problem, according to the nonpartisan Congressional Budget Office.

At a time when the economy is expanding and unemployment is below 4 percent, the gap between revenue and expenditures is widening.

To address runaway deficits and debts, substantial changes will be needed, Womack said.

Democrats who have embraced "the socialist movement" are unlikely to fix the nation's fiscal woes, he added.

While critical of the Democratic Party's progressive wing, Womack said he likes his Democratic counterpart on the committee.

"He's more bourbon. I'm more beer. But John Yarmuth and I are good friends," Womack said. "We text each other about nonpolitical things. He knows he can call me, and he knows he can confide in me."

The Arkansas congressman said the recent budget impasse is worrisome.

He expressed hope that things will be clearer once lawmakers return from the Easter recess.

"I sure hope for the sake of our country that the Democrats can kind of sort through their differences ... and can get back to some semblance of governance when we return in a couple of weeks," Womack said.