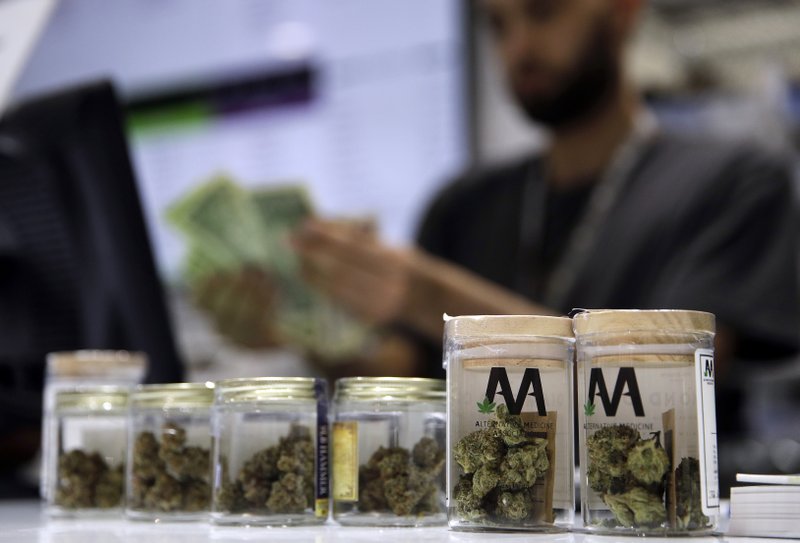 FILE - In this July 1, 2017, file photo, a cashier rings up a marijuana sale at the Essence cannabis dispensary in Las Vegas. Complaints that the state releases no information about who applies for and receives dispensary licenses in Nevada's booming retail marijuana business are spurring lawsuits and legislative proposals that appear poised to push the process public. (AP Photo/John Locher, File)

LAS VEGAS -- Complaints about Nevada's secrecy in awarding licenses to sell marijuana in the state's booming legal marketplace have boiled over into lawsuits and legislation that appear poised to pry open the process.

Several companies have sued the state tax department, arguing that no one knows for sure the criteria officials use to award new licenses. They complain the state releases no information about who seeks and receives permission to sell cannabis to adults, many of them tourists, in the nearly 2-year-old market.

They will ask a judge today to freeze the granting of marijuana dispensary licenses, at least temporarily, until the courts decide whether it's "arbitrary and capricious and violates the constitution," one lawsuit says.

The hearing will focus on a second wave of dispensaries approved in December in an evolving regulatory environment where local lawmakers are considering allowing pot lounges on or near the Las Vegas Strip.

"Licenses that admit a select few to such a lucrative enterprise must be made in a way that is open and transparent," said attorney Vincent Savarese, who wrote the constitutional challenge on behalf of Serenity Wellness Center and 10 other companies that were turned away.

"The point is to remove the marijuana trade from criminal enterprises, cartels and mobsters and street dealers, and to ensure that they don't have participation in the legal marijuana industry," he said.

The court arguments come days after the state Senate unanimously passed a measure to let officials release taxpayer information now labeled confidential. The proposal heads next to the Assembly.

Plans are underway to release the names of all applicants and licensees once the measure becomes law, said Ky Plaskon, spokesman for the state Department of Taxation, which regulates the licensing process.

Gov. Steve Sisolak on Friday acknowledged "the frustrations of many marijuana license applicants with the current licensing process" and endorsed the legislation that he said "would shed light on the methodology used ... in granting licenses."

Sisolak, a Democrat, was elected last November while calling for a state marijuana regulatory program similar to the Nevada Gaming Control Board, which regulates casino licensing. He has an advisory panel studying the formation of a Cannabis Compliance Board.

Hundreds of millions of dollars are at stake, and figures show that sales are booming.

In the last six months of 2018, all dispensaries reported $884 million in sales and the state took in almost $72 million in taxes on recreational sales, Plaskon said. There are now 65 marijuana stores statewide.

Today's court hearing in Clark County District Court is expected to draw attorneys involved in six lawsuits filed against the state Taxation Department on behalf of dozens of companies.

"I'm not saying anybody corruptly got a license," Savarese said. "But I'm saying that if they had, the process is opaque enough to provide cover for it."

His 11 clients already won some dispensary licenses in 2017, after Nevada voters in 2016 approved broad access to cannabis, and are seeking more.