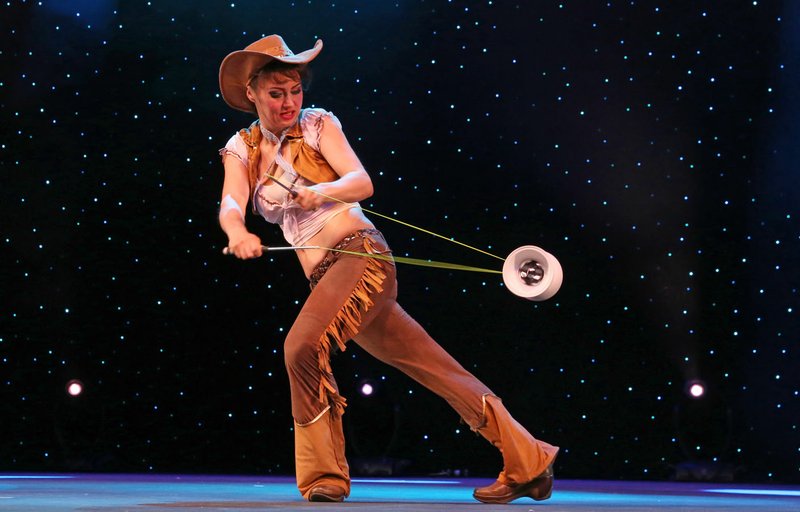 Born into a family of acrobats in the Czech Republic, it didn't take long before Maria Wolf realized she had a problem. Although she was part of the seventh generation of circus performers in her family and worked with them in an "unsupported ladder act," she says she really wasn't very flexible -- at least not flexible enough to excel at the high-flying trapeze routines that most women aspired to do.

Instead, she found her niche in something women did less often -- juggling. Specifically, she fell in love with the diabolo.

Looking like an hourglass without the frame, the diabolo -- pronounced dee-uh-BO-lo -- is derived from the Chinese yo-yo. The cups are spun using a string attached to two handles, and a practiced performer can do myriad tricks and tosses, sometimes using more than one bobbin or axle at the same time.

"I wanted to do something on my own, just me," Wolf says. "I had seen diabolo when I was about 15 years old, and I was so impressed. Not a lot of girls do diabolo, so I thought it would be really cool for me to do it -- and I could combine it with dance, because I have also a dance background."

Now, she says, she is the best in the world -- and apparently the world agrees. She was recruited by Cirque du Soleil as a specialty performer and earned permanent resident status in the United States for her extraordinary ability in the arts. At home in Las Vegas with her husband, who is a theme park designer, Wolf travels the country and the world performing. And this month, for the second year, she'll be part of the Festival of Wonder at Silver Dollar City. As one of very few performers chosen to return to the Opera House stage in the Branson theme park, she says she's completely revamped her act, her music and her costumes for the new year.

Her attitude, however, remains the same. She is amazed by the beauty of the Ozarks, impressed by the professionalism of the Silver Dollar City staff and humbled that by the final weekend of last year's engagement, the CirqUnique show was "sold out" -- audience members had to be turned away because the performance hall was full.

"I've worked all over the world," Wolf says in perfect English -- although, in fact, she speaks Russian, Polish, German, Czech and English. "And in Branson, the crew really stands out. They're extremely professional, and you don't have to tell them anything twice."

Before she worked there last spring, Wolf marveled that people would drive hours to visit Silver Dollar City -- which to her looked like it was in the middle of nowhere on Google maps -- but now she understands that, too. "It's just so beautiful, with the woods and the hills," she says.

There is still one thing she doesn't like -- roller coasters -- or at least she doesn't like riding them. She does like to walk through the theme park and watch other people ride, she says. But what she enjoys most is stopping in at the smaller shows and just taking a break. If she had a park, she says, that's exactly what she'd want it to be like.

Print Headline: Dancing With the Diabolo