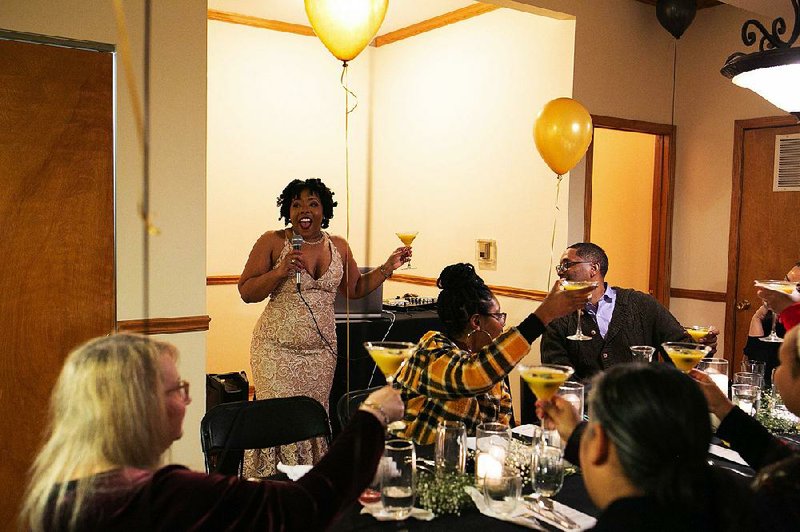 A Table For Twenty co-founder Stacie Thompson proposes a toast during a cannabis-infused dinner at a private home in the Humboldt Park neighborhood in Chicago in February.

CHICAGO -- The tables were set and the candles lit. Bouquets of baby's breath were arranged on black tablecloths, and menus rested atop each plate.

Table for Twenty was hosting its first event of the year. Wearing cocktail party attire, diners who paid $115 for a ticket sipped drinks and enjoyed a five-course meal.

But this wasn't a typical private dinner club event. At every place setting, a joint was placed neatly next to the silverware and the food and drinks were infused with cannabis.

Marijuana is coming out of the shadows, as more states look to legalize the drug for recreational use and the stigma eases. Perhaps nowhere is that more evident than in food, as weed matures from its college-dorm-pot-brownie reputation into a respected ingredient in fine dining. Exclusive, cannabis-infused supper clubs like Chicago's Table for Twenty are popping up around the country.

In Illinois, recreational marijuana is illegal, but Gov. J.B. Pritzker supports legalizing weed, and lawmakers are drafting a bill that would do just that. The legalization of marijuana is expected to unleash growth in Illinois, generating sales of $224 million by 2022. Entrepreneurs are looking for ways to get into the burgeoning industry early, even if it means occasionally skirting the law until weed is legal.

"For me, the thing is getting it together now so we can get our name out there first," said Anicia Peden, Table for Twenty's chef, as she stood over the stove, frying plantains on one burner and heating up a pound of cannabis butter on another.

Owner Stacie Thompson's goals are to establish Table for Twenty as a luxury brand and, as a black woman, to bring some diversity to the industry.

"I truly, truly believe black people deserve a seat at the cannabis table," she told attendees at the mid-February dinner. "And I am ready to take my place."

Customers of Table for Twenty can choose to have their food infused only with CBD, a legal cannabis compound that relaxes users but does not get them high. But the food at this dinner was infused with THC, the marijuana compound that does get users stoned. The joint was an extra touch.

Back in the kitchen, a container of marijuana sat next to a roll of paper towels and brown sugar. Peden also works in catering but for more than a year she has been laying the foundation for a career in the marijuana industry, teaching herself to infuse cannabis extracts into foods.

People want more than weed brownies, and they're curious about what other foods can be infused with cannabis, Peden said. She sees a business opportunity in that curiosity.

A cloud of smoke hung over the Logan Square room as guests talked and ate the dinner Peden prepared. Thompson used a microphone as each course was served to explain what the guests were eating and how it had been infused.

Ingesting marijuana is a different experience than smoking it. The plant must be heated to activate its chemical compounds, called cannabinoids, Peden said. Those compounds then must cling to a fat, such as butter, and the body processes it differently. Everyone's tolerance is different, Peden said.

As laws around the country become more marijuana-friendly, chefs will increasingly incorporate cannabis in their cooking, said Joline Rivera, founder of Kitchen Toke, a Chicago magazine and an app that teach readers how to cook with cannabis.

"From a chef's perspective, they look at this like anything else. It's an ingredient," she said.

Another supper club, Herbal Notes, has been hosting dinners in Chicago with marijuana-infused dishes for more than a year, said chef and founder Manny Mendoza. The multicourse meals typically cost $125 and are open to anyone over the age of 21.

"We understood what the [legal] risk was associated with that, but we took it anyway because we want to be pioneers," Mendoza said.

"It's not like there's some kind of criminal enterprise going on here," he said. "It's a dinner party."

The 26-year-old Pilsen native attended the Culinary Institute of America and opened Herbal Notes as a supper club in San Diego. He moved back to Chicago in 2017, a year after Illinois decriminalized the possession of small amounts of marijuana.

Herbal Notes has served more than 1,200 people in Chicago, he said. Eventually, he wants to partner with growers and other large cannabis companies.

Mendoza asks attendees to fill out a questionnaire before the dinners so he can make adjustments based on each individual's tolerance. Some courses come with marijuana-infused sauces, so diners can decide for themselves how strong to make their dishes.