Alan Utter, provost and vice president of academic affairs at Texas Woman's University, will start July 1, pending approval by the ASU board of trustees in June, the university announced in a news release Thursday.

Utter and two other candidates visited the Jonesboro campus for interviews and public forums in March.

The university's provost "will foster scholarly and research activities, provide academic strategic planning, support the mission of the institution, and direct the primary academic activities of A-State," the university's job posting read.

ASU Chancellor Kelly Damphousse said in a news release that Utter stood out for his research experience and incorporation of students in research.

"These days in American higher education, we are called upon to be innovative, but also accountable to our stakeholders -- accrediting agencies, assessment, state and federal governments, and most of all, our students and their families," Damphousse said. "My conversations with Alan lead me to believe that he is the right person at the right time for A-State, particularly as we move forward with our strategic plan."

"From all accounts, whether it is an elevation of research and creative endeavors, advancing concepts of globalization and international education and a commitment to innovation, Arkansas State is on a positive trajectory under the leadership of Chancellor Damphousse," Utter said.

"It is both an honor and privilege to assist the faculty in their quest for excellence in the classroom and with their research pursuits," Utter continued. "My very first goal is to spend time listening to and talking with constituents on the Arkansas State campus. And I am looking forward to it."

Utter completed all of his academic degrees at the University of Pittsburgh, according to his curriculum vitae.

Utter was selected over Gregg Garn and Velmer Burton, both of whom also interviewed on campus in March.

Garn is dean of the Jeannine Rainbolt College of Education at the University of Oklahoma and is executive director of the university's K20 Center for Educational and Community Renewal.

Burton is senior vice chancellor for university strategy and performance at the University of Arkansas at Little Rock and is a criminal justice faculty member there.

Cooksey has been provost since 2012. 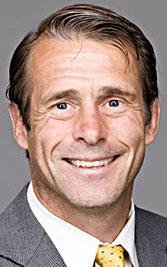