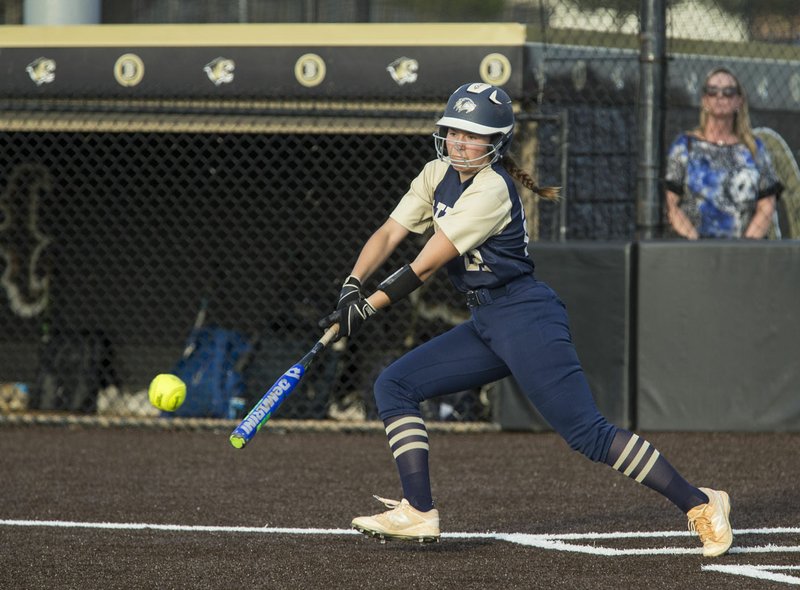 BENTONVILLE — Anthony Cantrell never hesitated as he waved for Carlee Durham to round third base and head for home.

The result was a good one for Bentonville West as Durham scored what proved to be the decisive run, and the Lady Wolverines claimed a 5-4 victory over Bentonville high in a 6A-West Conference game at the Tiger Athletic Complex.

Durham stood on first as part of a bases-loaded situation when Hallie Wacaser nailed a line drive into left field that could have ended the top of the fourth inning. Sydney Sneed and Mary Beth Dyson both scored as the handcuffed Alleyna Rushing fell to the ground, then Cantrell sent Durham, who scored as the throw home never made it to the plate and gave West (13-1, 6-1) a 5-2 lead.

“Carlee can run, and we were going to take a chance and get her to the plate,” Cantrell said. “It turns out we needed it. If we can get her on base, she’s going to score a lot of runs because she can get rolling.”

The run became critical because Bentonville (8-5, 5-1) picked up a solo home run by Morgan Nelson in the sixth and Cailey Cochran in the seventh to make it a 5-4 game. Durham, however, helped West avoid further damage when she caught McKenzie Vaughan’s fly as she crashed into the left-field fence and saved the tying run.

“Give them credit; they got a big hit with Wacaser there,” Bentonville coach Kent Early said. “They got it done, and we didn’t. We had chances earlier in the middle innings, and we didn’t come through. That’s what hurt us. We had about three innings there when we stalled offensively.”

Cantrell made some other good decisions earlier in the game. When Bentonville jumped out to a 2-0 lead against starter Elise Sokolsky, West opted to go with Emma Wood (6-1), who picked up the win in relief.

Dyson then took Sokolsky’s spot in the batting order, and it was her two-out infield single that kept the fourth inning alive. Durham then drew a bases-loaded walk that scored Ryen Rassi and tied the game at 2, and that set up Wacaser’s line drive.

“We started Sokolsky in the circle, then she got a little light-headed before the game,” Cantrell said. “We knew they had seen Emma a few times, and I told her we were probably going to do that.

“Emma’s a gamer and wants the ball every time, but they had seen her the last four times. I wanted to try something different, but it didn’t work out. Emma then came in and threw really well.”

Madison Heinle threw a one-hitter and Rogers scored five runs in each of the first three innings to defeat Heritage at Veterans Park.

Emma Kate Jackson had a home run while Jenna Williams had two hits and drove in three runs while five other Lady Mounties drove in two runs apiece. Rogers (8-2), banged out 14 hits, led by Cassie Gonzales with three.

Heinle struck out seven and walked one as she threw only 42 pitches in the short outing.

Jenna Wilson drove in three runs and scored twice to lead Northside to a 6A-Central win at home over Southside. Danessa Teague and Aleigha Harrison each drove in two runs for Northside, which led 5-0 over three innings before Southside scored four in the fourth. The Lady Bears then added four insurance runs in the sixth.

Hana Dingman drove in three runs and Madi Conklin added two for South-side, which scored three in the seventh to keep things close.

Shalin Charles had a home run and finished with three hits and three RBIs to lead Fayetteville past Har-Ber at Hunt Park.

Henry Apple can be reached at happle@nwadg.com or on Twitter @NWAHenry.