PINE BLUFF -- Police are tapping into additional resources in an effort to stem an uptick in violence that has led to 11 homicides in the city this year.

Clifton McDowell, 24, was shot Monday afternoon and died during surgery later that evening, the second fatal shooting over a three-day period in the city of 42,984 people.

Nine of the city's 11 homicides occurred in the first three months of 2019, making it Pine Bluff's deadliest first quarter of a year in the past six years. Arrests have been made in three of the 11 homicides. No suspects have been named in the other eight.

The deadly surge comes at a time when the city is pouring millions of dollars into the high-profile, high-stakes initiative Go Forward Pine Bluff. The initiative aims to revitalize the city by making substantial investments in the community, including a new library that is under construction, a new aquatics center that will open within a few weeks, renovation of the Merrill Center and a face-lift for the downtown corridor.

Officials believe the changes will help turn Pine Bluff into a destination spot, but the growing number of homicides this year feeds into a reputation the city is trying to shed.

"The spike in homicides is a major concern," Mayor Shirley Washington said in a statement issued through her office. "As we move our city forward, we are working with our police department to provide better training and technical assistance to officers. We are also partnering with our county sheriff and prosecuting attorney, as well as exploring the U.S. Department of Justice National Public Safety Partnership."

The first-quarter homicide total for 2019 topped the eight homicides recorded in the first quarter of 2017. The city recorded 28 homicides that year, the highest total over the past six years, according to information obtained from the Pine Bluff Police Department.

Data from the FBI Criminal Justice Information Services Division show there were 22 homicides in Pine Bluff in 2017. When asked about the discrepancy between the city's total and the FBI's total for 2017, Pine Bluff police spokesman DeAunuana Martin Roberts said the city's total was accurate.

Trisha Rhodes, a criminal justice professor at the University of Arkansas at Little Rock, said that while Pine Bluff's violent crime statistics are concerning, such statistics can be misleading because the numbers are based on population counts and don't take into account population density.

"Population density varies quite a bit across cities," Rhodes said. "Most violent crime is located in relatively small areas that have recurrent crime problems, which we call hot spots. In other words, the entire city of Pine Bluff may not have a violent crime problem, but it is more likely that there are high rates of homicide and violence in relatively small areas or sections of the city."

Pine Bluff police are putting a greater focus on creating avenues of communication between the Police Department and the community in hopes of generating information that will lead to arrests or prevention of violent crime.

A $50,000 rewards fund has been created, and police are offering up to $10,000 for information leading to arrests and convictions. The money comes from unused salaries from the department's 17 unfilled positions.

"People are often reluctant to talk. We get that," said Ricky Whitmore, the assistant police chief. "What we hope is that the money will help someone overcome their fear of talking to us."

Rhodes agreed that community participation is critical. Police departments tend to prioritize crimes that are easier to clear, she said, such as crimes where leads are plentiful or a direct line of evidence exists to link perpetrators to victims.

"Officers really rely on citizens to report information and to cooperate in investigations," Rhodes said. "If you don't have people coming forward, it's hard to make progress in those cases."

Chief Kelvin Sergeant also formed a Violent Crimes Unit last July, which is overseen by Capt. Denise Richardson and includes a lieutenant, a sergeant and six officers, all of whom were handpicked for the assignment.

"These are high-intensity first-responders," Richardson said. "We pick them because they are connected to this community, they work hard, do great work and testify well in court. They are good at everything we need them to be good at."

The unit works to head off crimes before they occur, using a combination of community policing, saturation patrols, surveillance of known troublemakers and disruption of crimes in progress. The unit has no set schedule, no set hours and no set assignments but is ready to move at any time, day or night.

"If we have a problem in the city, we move to the problem," Richardson said. "This unit is not held down by 911 response. We can move where patrol can't move. We can adjust our hours where they can't adjust theirs, so that gives us flexibility to move and address problems individually or collectively."

The unit also engages in high-visibility patrols to raise awareness of a police presence.

"I think this taints the whole effort and it creates anxiety for people who don't live here, but I do think that perception can be changed," Turner said. "We may take two steps forward and these homicides push us back a bit, but we have to keep doing what we're doing."

Turner said the key is for residents to get involved and assist police in solving crimes, and to not allow fear to keep them from acting.

"Crime prevention is not a law enforcement problem. It's a community problem," he said. "That means the whole community, from the young people to the elderly, have to be involved." 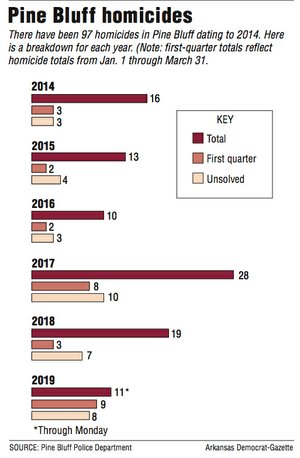