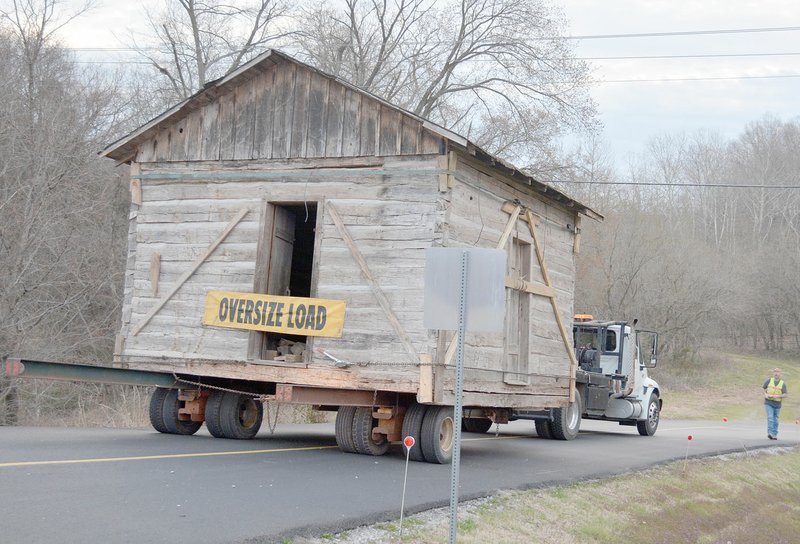 After nearly a year of planning and fundraising, the Settler's Cabin has arrived at the Bella Vista Historical Museum.

Lucas says she appreciated the Bella Vista Police Department's help in safely transporting the structure from Pease Drive, down Arkansas 340 and U.S. 71 to the museum.

Covey says the first parts of the move were the hardest.

The cabin sat on a steep hill, and workers had to build a trailer with steel beams beneath it. Under that trailer, they stacked lumber to create a ramp, giving it somewhat level ground to roll across.

A compact backhoe with Covey at the helm tugged at the trailer's tongue, pulling the house forward a few feet at a time.

With each pull, workers checked to make sure everything was lined up correctly before disassembling the rear portion of their wooden tower and reassembling it in front of the trailer's wheels so it could be rolled a bit further.

The cabin had to be moved straight forward until it passed a tree, then it was rotated to pull up the hill to Pease Drive after two long work days.

"When it came over the hill though, it all looked better," David Covey says. "That hill was more than I expected it to be."

Once on the road, though, Covey says it was a smooth trip.

The historical society voted to acquire the 16-by-16-foot log cabin in March of last year when Bella Vista resident Scott Butler offered to donate it.

The cabin was built in 1916 near the Highlands Gate area, then moved behind a house on Pease Drive in 1979. According to a Weekly Vista article published on April 29, 1987, it was moved by Bella Vista resident Paul Parish, a history aficionado and self-taught wood sculptor.

The structure was set to be demolished. After Parish requested it, the compact structure was dismantled by Cooper Communities, with the logs numbered for easier reassembly. The reconstruction reportedly took about a year.

Lucas says that, while the cabin is in place, there's plenty still to be done. The structure will need to be re-roofed with period-correct wooden shingles, she says, a deck needs to be built for it, period-correct furnishings need to be acquired and added, and electric wiring will be set up to power displays inside.

"We still have a whole lot of work," she says.

Print Headline: On The Move