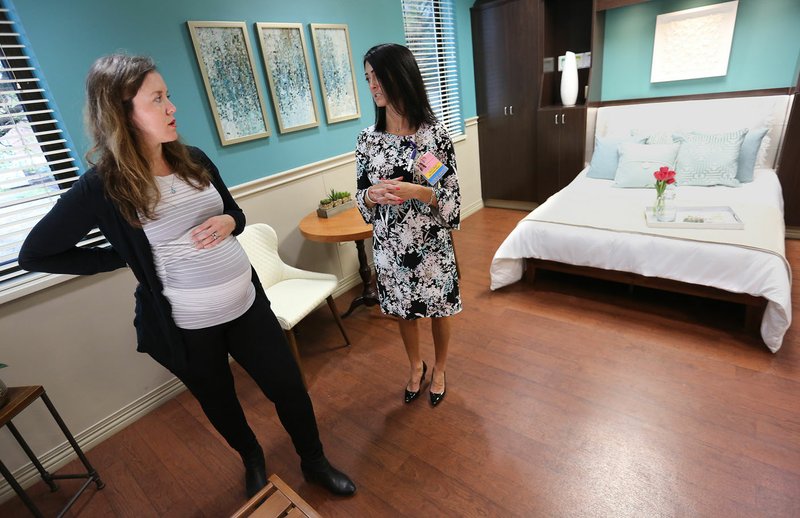 NWA Democrat-Gazette/DAVID GOTTSCHALK Erin Killeen (left), in her third trimester of pregnancy, visits Thursday with Christine Picarelli, director of nursing of women and infants in a low intervention birthing suite at Willow Creek Women's Hospital in Johnson. More women are choosing to give birth in settings other than a hospital. A birthing center, which was a middle ground option between a hospital and a home birth, in Rogers recently closed. Northwest Health recently opened low-intervention birthing suites at Willow Creek and its hospital in Bentonville, where midwives deliver babies.

FAYETTEVILLE -- Sarah West Castle learned several months into her pregnancy her birthing plan was no longer an option.

The 32-year-old Van Buren woman had a baby in 2016 at the Birth Center of Northwest Arkansas in Rogers and was planning on going there again with her second child in late December or early January.

"I was devastated. I broke down crying," Castle said about when she got the phone call the center would be closing in December.

Birthing centers are facilities where women give birth naturally, typically with a midwife. Unlike a hospital, there's no medically induced labor, no Cesarean sections and no epidurals. Also, unlike a hospital, women are generally encouraged to give birth in whatever position feels natural to them and offered alternative options, such as water births.

"People underestimate how wanted this is," said Kelsey Gilley, a nurse midwife who worked for the birth center. "At the birth center, patients from Little Rock, Oklahoma, Missouri came to us because they couldn't get anything like that."

Gilley is a nurse midwife who will care for patients in the low-intervention suites at Northwest Health.

Some women did water births at the center, and Castle started in the tub while she was in labor but ultimately decided to give birth in the bed.

"I just felt so relaxed," she said.

A representative from the Birth Center of Northwest Arkansas didn't return phone calls. A news release said the center closed for financial reasons.

The low-intervention suites at Northwest Health and Willow Creek have beds larger and lower to the floor than hospital beds, tubs for hydrotherapy for pain relief, wireless monitoring so patients can walk around and stools designed for patients who want to give birth upright. Patients may also use nitrous oxide for pain relief, said Juli McWhorter, chief administrative officer at Willow Creek.

"Most of all, it allows ladies to have the sort of birth experience that they want to have," said Steve Badger, chief executive officer at Northwest Health-Bentonville.

The idea is for women who want an at-home experience to have the option of doing something similar, but in a hospital where they have more safety measures, he said.

"The hope is that they'll come into a low-intervention birthing suite and not feel like they're in a hospital at all," said Samantha Corral, a nurse midwife at Willow Creek. "The idea is to promote a very calm and home-like environment ... . Labors, as we know, go the most smoothly when patients feel safe and comfortable and where they don't feel like they're up in arms."

Although women typically give birth in a hospital while on their backs, that's often not the best way, Gilley said.

"Left to their own devices, women will kind of tell you which position they need to be in to birth, maybe not verbally, but their body will just do that position," she said.

Being in an upright position can help because gravity is on their side, she said.

State law bans birth centers from taking patients who fall into any of 21 high risk categories. Patients who have heart disease or another serious health condition, are younger than 14 or are giving birth to twins or a premature baby, for example, wouldn't be able to deliver at a birthing center.

Likewise, licensed lay midwives are only allowed to care for healthy women, "determined through a physical assessment and review of the woman's health and obstetric history, who are at low risk for the development of medical or obstetric complications of pregnancy or childbirth and whose expected outcome is the delivery of a healthy newborn and an intact placenta," according to the Health Department.

A licensed lay midwife isn't a certified nurse midwife. Gilley and Corral, both certified nurse midwives, are licensed in midwifery and are also nurse practitioners who can do annual gynecological exams, prescribe birth control and some other medications and provide prenatal care for patients.

"I believe in physicians, too," Corral said. "We work with them, and we love them."

A number of complications can happen unexpectedly during childbirth that are dangerous to deal with at home, McWhorter said.

"It's a danger to both the mom and the baby, and those occur very rapidly," Badger said. "Unfortunately, we've had tragedies come to our doorstep because of that."

Women have different reasons for going an alternate route.

"I feel like I see a lot of really educated women who are doing research and reading studies, and they're hearing about other options from other states, from universities, and once they've heard that there's another way, they're seeking out ways to do that in Northwest Arkansas," Corral said.

Cindy Ramirez, 30, of Rogers, said giving birth naturally was a personal goal of hers.

"I wanted to see if I could truly go through the process," she said.

Ramirez said she had a good experience and the staff seemed focused on making her comfortable when she gave birth last month in one of the low-intervention suites.

Patients who deliver with a midwife with minimal intervention also save on health care costs, Corral said.

Carol Sakala, who leads maternal health and maternity care for the National Partnerships for Women and Families, a Washington-based organization, said women often don't get respectful care while they are in labor at hospital.

"We are strong advocates of midwifery," Sakala said.

Hospitals tend to use a blanket model for how they deliver babies, rather than adapting to individual preferences, she said. For example, a doctor may only agree to deliver a baby if the mom is on her back.

While patients have the right to refuse care, doctors also have rights and cannot be forced to do something they feel is unsafe, such as delivering a baby vaginally when the doctor deems a Cesarean section necessary, she said.

In rare cases, women have been forced to undergo Cesarean sections, Sakala said.

At hospitals, "things are organized for the ease and safety for the doctor, for the nursing staff and maybe secondarily for the patient," Badger said.

Erin Killeen, 32, of Fayetteville expects to give birth in May to her first child at one of the low-intervention suites.

"I think [doctors] have an extremely important role for complications, but with a natural, healthy birth, there's not necessarily that need, and, at times the interventions can be pushed to accelerate a birth, so I really wanted to be aware of that and make sure that I wasn't setting myself up for someone accelerating my birth," she said.

Killeen said she liked the idea of having a nurse practitioner who would support her in a low-intervention birth but could identify when a doctor may need to intervene. She added she didn't want to be forced to give birth on her back and she wanted the option to move around, dim the lights and have music.

More women are veering away from hospital settings.

Licensed lay midwives delivered 250 babies in homes in Arkansas in 2016, according to the Health Department. That's an increase from 121 babies in 2006. 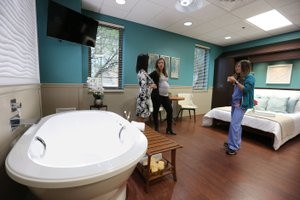 NWA Democrat-Gazette/DAVID GOTTSCHALK Erin Killeen (center) visits with Christine Picarelli (left) and Samantha Corral (right), certified nurse midwife and doctor of nursing practice, at Willow Creek Women's Hospital in Johnson. More women are choosing to give birth in settings other than a hospital. 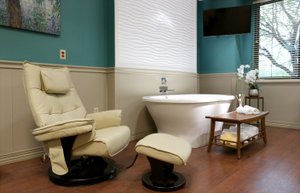 NWA Democrat-Gazette/DAVID GOTTSCHALK The labor tub is inside the low intervention birthing suite at Willow Creek Women's Hospital in Johnson.