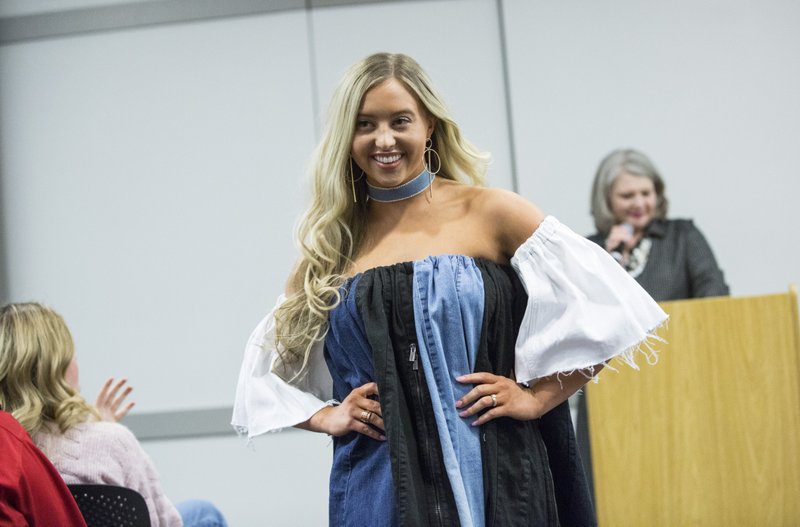 NWA Democrat-Gazette/BEN GOFF @NWABENGOFF Alexis Windsor, a University of Arkansas freshman from Fort Smith, models a denim dress she made Wednesday, April 3, 2019, during the fashion industry pecha kucha hosted by Northwest Arkansas Fashion Week at Crystal Bridges Museum of American Art in Bentonville. NWA Fashion Week partnered with Arkansas Arts & Fashion Forum to bring together four speakers to talk about sustainability in the fashion industry. After the talks students in the apparel merchandising and product development program at the University of Arkansas modeled clothing items they made from repurposed denim. The event kicks off NWA Fashion Week Spring 2019, which continues with shows in Bentonville through Saturday. - Photo by Ben Goff

BENTONVILLE — If tourism is healthy for a city, then Visit Bentonville has a good prognosis to share in its Advertising and Promotion Commission’s annual report.

The economic impact from community events increased 29 percent from $1.87 million in 2017 to $2.41 million in 2018, said Kalene Griffith, Visit Bentonville president and CEO. Griffith said the figures were tracked throughout the year by her staff using the organization’s economic calculator.

The city’s success in tourism continues to grow annually, Griffith said. Some 217 events focusing on cycling, sports, meetings and group tours were among those that drew visitors in 2018, she said.

“We’re seeing new and exciting things happening, and the developments and new organizations that are coming into the community and the impact of hotels and attractions have really allowed us to tell a better story as we continue to grow and evolve as a destination,” Griffith said.

Mervin Jebaraj, director of the Center for Business and Economic Research at the Sam M. Walton College of Business at the University of Arkansas, said tourism plays a key role in the local economy. People are drawn to the area because of the abundance of mountain biking trails and the Crystal Bridges Museum of American Art, he said.

Some of the large-scale events include Northwest Arkansas Fashion Week, the Power of Music Festival, the Bentonville Film Festival, the Roots Festival and Bite NW Arkansas, Griffith said. Ten sporting events have been added to the annual calendar, and bus tours have increased by 300 percent.

Rachel Fox, marketing manager of Fashion Week, said many of the designers and models are local, but there is a push to get the message about the show outside the state. Fox recently moved to the area from Raleigh, N.C. She said she has seen the impact tourism has on the city. She said her family in New York has been “pulled into this cultural community.”

Events such as Fashion Week, which started Thursday and continues through Saturday, help get the message out about Arkansas, she said. “This is the perfect place to bring a business.”

Benton County had 1.61 million visitors in 2018, according to the Arkansas Department of Parks and Tourism website, trailing behind Pulaski, Garland, Sebastian and Washington counties as the the top five counties for travel spending.

“That number is just as important to us, because we know those visitors are crossing city borders,” Griffith said. “When a traveler does come to Northwest Arkansas, they don’t know if they’re in Bentonville or Rogers. So, it’s important for us to be very collaborative as a Benton County region.”

“Each city has something, be it trails or other amenities,” Jebaraj said.

Jebaraj said it is hard to come up with an exact number for the impact tourism has in the area because it is not the biggest industry in Northwest Arkansas.

The long-term impact benefits Bentonville as a whole on a day-to-day basis, Griffith said. The money is spent at restaurants, hotels, retail establishments and convenience stores. The commission gets money from the 1 percent tax at restaurants and 2 percent at motels.

“Tourism is the gateway to economic development and to relocation,” she said. “It also opens up the door for people to see our success and the quality of life that we have in Bentonville that then creates their thinking about relocating or investing in building their business in our community.”

Because Griffith said every Bentonville resident benefits from visitors to the community, the Visit Bentonville team has presented its annual report in an infograph format. The commission’s annual report will be available Friday at www.visitbentonville.com.

“We’ve kept numbers on things, but we’ve never taken those numbers and put them in a form in which people can read it and understand it,” Griffith said.

“We’re really kind of targeting and telling our story from a local’s perspective but that is very inviting to the visitor coming into the area,” said Kalene Griffith, Visit Bentonville president and CEO.

The “A New American Town” podcast is at www.visitbentonville.com.

Mike Jones contributed to this report. He can reached at email at [email protected] .

Mary Jordan can be reached by email at [email protected] . 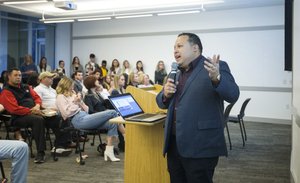 Photo by Ben Goff
NWA Democrat-Gazette/BEN GOFF @NWABENGOFF Gerson Fajardo with Walmart talks about sustainability efforts of the Bentonville retailer Wednesday, April 3, 2019, during the fashion industry pecha kucha hosted by Northwest Arkansas Fashion Week at Crystal Bridges Museum of American Art in Bentonville. NWA Fashion Week partnered with Arkansas Arts & Fashion Forum to bring together four speakers to talk about sustainability in the fashion industry. After the talks students in the apparel merchandising and product development program at the University of Arkansas modeled clothing items they made from repurposed denim. The event kicks off NWA Fashion Week Spring 2019, which continues with shows in Bentonville through Saturday.