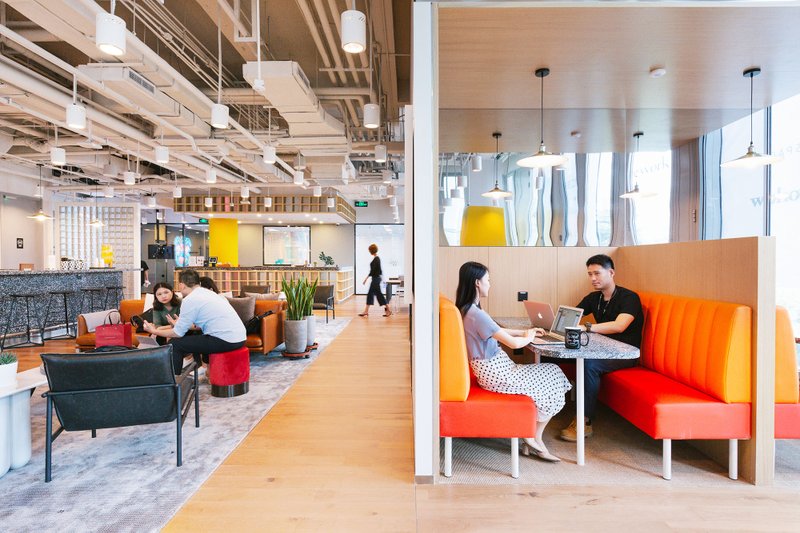 BENTONVILLE -- WeWork, a company known internationally for providing a growth environment for other businesses, will open a location in Bentonville, Miguel McKelvey, the company's co-founder announced Monday.

Gov. Asa Hutchinson and Bentonville Mayor Stephanie Orman attended the announcement, which was made before a crowd of at least 130 people at The Record event center in downtown Bentonville. Hutchinson said WeWork has a proven record of helping both new companies get started and established companies become more innovative.

The 200,000-square-foot development in downtown Bentonville will be the company's first Arkansas site. It will house retail, community space and work space for more than 3,200 WeWork members across several floors, according to a company news release.

WeWork designs, builds and operates work spaces. It recently announced a lease of about 40,000 square feet in Atlanta, at 881 Peachtree Street, a 29-story, mixed-use project being jointly developed by Hanover Company and The Loudermilk Companies. The deal allows the company exclusive use of a rooftop amenity space, according to the company's announcement there. The company surpassed a total value of $45 billion in November, according to the Wall Street Journal.

Developers Josh Kyles and Blue Crane LLC will lead the project and will work with Cushman and Wakefield/Sage Partners. The exact location of the downtown Bentonville site, the cost of the project or other details such as the opening date were not disclosed Monday. Hutchinson did say the company did not seek any special tax incentives or other help from the state to start up in Bentonville.

Hutchinson said WeWork will build on the innovative tradition of Sam Walton, founder of Walmart, trucking magnate J.B. Hunt and Don Tyson. The next one of those giants "or the next Bill Gates," founder of Microsoft, could come from WeWork in Bentonville, he said in an interview after the announcement.

McKelvey attended Monday's announcement and said the company uses space, technology and services to "help people make a life, not just a living.

"It's part of an ecosystem changing how we work, live and learn all over the world and are thrilled to welcome Bentonville to our global community," he said.

McKelvey's first reaction to the prospect of opening up a site in Arkansas was surprise, he said during the announcement. "Coming from New York city, when we first thought of coming to Bentonville I felt, 'Why?'" McKelvey said. "Then I came here." The quality of life is outstanding, he said, and so is the entrepreneurial climate, he said. His company and the town will be a perfect fit, he said.

WeWork's decision to open a location here will raise Bentonville's profile as a place of innovation and opportunity, a desirable place to start a new business, said Graham Cobb, president of the Greater Bentonville Area Chamber of Commerce. WeWork has a reputation as a company able to find creative cultures and talent, and for helping businesses located there thrive, he said. That will draw the notice of investors who may not have considered Bentonville before, he said.

WeWork was founded by McKelvey and Adam Neumann in 2010. The company has more than 400 sites in 27 countries.