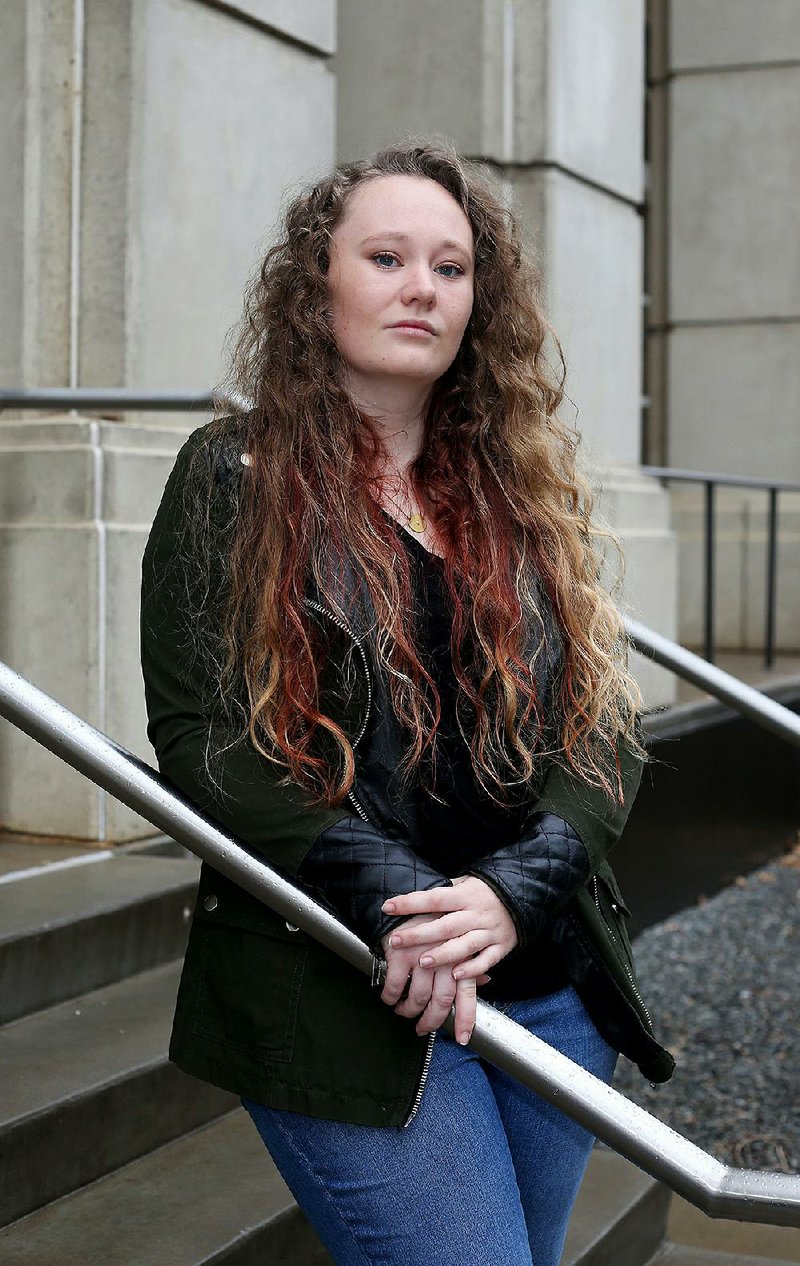 Told the bare minimum about why she had been arrested, "I just knew this was something that I hadn't done," said Hunt, 22, an architecture student at the University of Arkansas, Fayetteville.

Her arrest had been on a complaint of terroristic threatening, but she said the university's police officers shared few other details.

"One of them said that it was what you posted on Facebook this morning," Hunt said, which left her "very, very confused." Her only Facebook update that day had been to showcase some class projects, she said.

After what she described as a sleepless night in the Washington County jail, "as soon as I got out, I knew I had to start working toward figuring it out and fighting it," she said.

Months later, authorities have cleared her of wrongdoing. The details have mostly been filled in. But some answers remain elusive or unsatisfying to Hunt.

Last May, campus police heard from a student reporting a Facebook threat that turned out to be falsely attributed to Hunt. A police report states that, within an hour, officers were looking for Hunt in order to make an arrest.

Only days later did the person reporting the threat, according to police, admit to impersonating Hunt on Facebook. Nicolette Nottage, 24, has a trial date scheduled for this month in Washington County Circuit Court on a felony charge of filing a false report.

In an era when researchers estimate that 80 percent of adults ages 18 to 24 use Facebook -- and about 68 percent of all adults, according to a Pew Research Center survey -- a digital forensics expert from West Virginia said cases of online impersonation have increased over the past decade.

In Hunt's case, police moved to arrest her without verifying that the threat came from her account. Nor was there an attempt to question Hunt about the allegation.

Steve Gahagans, director of the UA police, said the department has learned from the case. He also defended the quick action to place Hunt under arrest.

"The officers and our investigators felt they needed to act swiftly to find this person based upon what they were being told," Gahagans said.

A police report and materials released under the state's public-disclosure law show copies of the alleged threat.

The threat, as written, listed the address of the student and stated, "i know where to find you," according to a copy of the purported Facebook conversation. The threat included references to a firearm and being "not afraid" to "end your life."

Gahagans cited "what's happening around the United States regarding active shooters" as a reason to move rapidly.

Hunt said she and her family found themselves in an uphill battle to prove her innocence. Hit with an immediate suspension from UA, Hunt described feelings of frustration while attempting to explain her case to UA's student-conduct officials.

"It just felt like if we wanted to prove this, it was going to be all us, with no help, and so that's what we did," Hunt said.

Her half sister, Megan Garner, said she is disappointed that police did not gather more information about the social media messages alleged to have been sent by Hunt.

"Why wouldn't they know more about how to spot this sort of thing? Because you would think that on a college campus, that's going to be an issue that's very prevalent, and it feels like if you're gong to be policing a college campus that you should have the tools and the knowledge to do that well," Garner said.

Video released by UA police shows an interview with Nottage, but not any attempts by police to view the alleged threat online. Gahagans, in an interview, said police reviewed photocopies of the threat. He said additional information had been submitted to UA student-conduct authorities. A spokesman for UA declined to comment on the student-conduct case.

Images included with the police report show a Facebook page, complete with the familiar blue background, and a profile picture of a smiling Hunt.

The message, seemingly sent to Nottage by Hunt via the social media website, warns, in part: "leave this school or i will come to your apartment at varsity house and kill you with my own gun." The message delivered to Nottage, who is black, also stated: "i hate black people and i hate what you did to me and to the others and its not fair that you are still alive because you have a serious problem."

The words fit the state's definition of terroristic threatening, defined as happening when threats are made "with the purpose of terrorizing another person."

The report states that Nottage sat down to be interviewed by police about 4:25 p.m. on May 1. By about 4:54 p.m., UA police began searching "to locate Ms. Hunt, make a probable cause arrest for terroristic threatening, and issue a suspension letter from the Dean of Students," according to the report.

John Mikesch, an attorney who has represented Nottage, declined to answer any questions about the case.

Gahagans said neither he nor other UA police investigators recalled handling any previous cases involving Facebook impersonation or a similar deception.

Should similar online threats be taken to police in the future, investigators "would look at it closely to see if they could detect anything that, maybe this is not what it appears to be," Gahagans said.

Josh Brunty, an associate professor of digital forensics and information assurance at Marshall University in West Virginia, said the past decade has required more police agencies to gain familiarity with social media.

"It becomes extremely important for these law enforcement agencies to have the appropriate training to identify and investigate these threats appropriately. That takes a little bit of training," said Brunty. "It's not just validating an account at face value. It's how to look underneath that account and see if it is real, is it credible, and am I pursuing the right person?"

"That will give you basic subscriber information, such as log-in or log-out times," Brunty said. He added that, "where there's a credible threat of bodily harm and it's imminent, we can compel social media providers like Facebook to possibly give us data quickly." Brunty said same-day turnaround time is common, and sometimes information can be provided within minutes to law enforcement authorities.

Brunty said a typical way for law enforcement authorities to get information from a social media company or an Internet service provider is to ask a court for a search warrant. But in cases in which there is a threat of "imminent bodily harm," police can work to get information without a court order, he said.

"We want to protect that person that receives those threatening messages, and for them to feel safe. But at the same time, you want to maintain a level of diligence in that investigation. That sometimes is a hard balance," Brunty said.

Shortly after her release from jail on bond, Hunt said, she made a phone call to Garner. The next day, Garner, 34, set aside her job to make the eight-hour drive from Nashville, Tenn., to offer support.

"My stomach dropped and I felt sick," Hunt said.

Garner described hours spent trying to understand just what had been done to impersonate Hunt, efforts to explain the workings of Facebook to Hunt's attorney and then to present the information to UA student-conduct officials.

Garner said there were basic things that might have been red flags, though it's unclear to her exactly what sort of manipulation might have taken place with the threat shown to investigators.

Garner said police could have checked to see an actual Facebook conversation between Nottage and Hunt from years back, and maybe seen the difference between the two accounts said to be from Hunt. Some things "take 30 seconds, but if you don't know, if you're not familiar with Facebook, you're not going to do it," Garner said.

Garner said she created a document to explain some ways of potentially verifying an account or Facebook conversation, then sent it along to her sister's attorney to be shared with university officials.

The police report states that on May 7, a UA student-conduct official notified police that the threat might have been falsified, stating that "the document provided by Ms. Nottage appeared to have been produced using computer software and hade [sic] some imperfections indicating a copy and paste procedure being used," according to a portion of the report written by Capt. Greg Foster.

In addition, "It also was apparent from the document that a fictitious Facebook page had been created by Ms. Nottage to create the threatening message, making it look as if the message had come from Ms. Hunt to Ms. Nottage," the report states.

The report states that on May 8, Nottage told a student-conduct official that the threat had been "fabricated." A felony criminal charge against Nottage was filed by prosecutors on May 17, and a trial date is currently scheduled for April 29.

In addition to feelings toward police -- "I feel like I don't have any trust for university police," Hunt said -- there are also her thoughts toward Nottage, a former friend and architecture classmate who once was like a sister, she said.

Hunt has filed a civil lawsuit against Nottage, who attended UA as an international student from the Bahamas. The suit is pending in Washington County Circuit Court.

Hunt said that in her phone, she still has "hundreds of pictures" from when she and Nottage were best friends. By November 2017, however, the friendship had deteriorated to the point that UA had issued a no-contact order between Hunt and Nottage.

As police interviewed Nottage about her claim of receiving a threat, she brought up an earlier report in 2017 of items reported stolen from architecture students, saying that "everyone blamed me for it." In that May 2018 interview about the threat, Nottage stated that she, too, had items stolen.

Hunt, when asked whether the lawsuit is a way to try to have her former friend explain what happened, nodded in agreement.

"I think the biggest thing that I want is accountability, and an answer to why. And I don't really feel super hopeful that I'm going to get that, but I'm just trying," Hunt said.

Print Headline: UA student spent night in jail over Facebook post that wasn't hers. Now she sees perils in tracing of threats