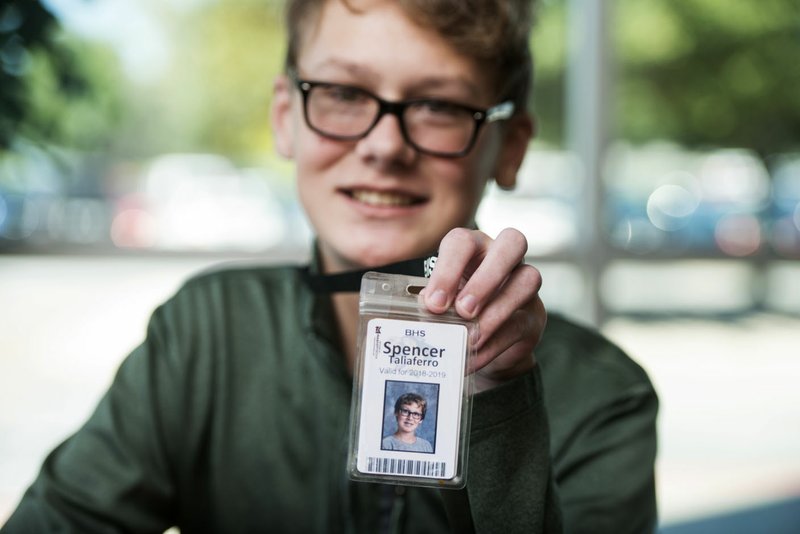 BENTONVILLE -- Priya Thelapurath said she doesn't give much thought anymore to the lanyard with her identification card hanging around her neck.

"I wouldn't say it's a big burden," said Thelapurath, 16, a junior at West High School in Centerton. "I don't even remember it's on throughout the day."

The School District this year became one of an increasing number of districts to adopt a rule requiring its 5,000 students in grades nine through 12 to wear their student identification cards.

The actual badges are sponsored by Mascot Media and McClarty Daniel and don't cost the district anything. Badge printers, ink, lanyards and vinyl covers totaled about $4,000 at both high schools, according to Janet Schwanhausser, the district's finance director.

The School Board unanimously adopted the measure in March as a way to improve security on the high school campuses. That vote happened less than a month after the attack at Marjory Stoneman Douglas High School in Parkland, Fla., that left 17 dead.

Steve Vera, the Bentonville district's safety director since last year, said the thought of requiring identification cards to be worn occurred to him before the Parkland shootings, when he was a student resource officer at Bentonville High School.

"Recent events magnified how we really need to put that into effect," Vera said.

It's not a novel concept. The National Center for Education Statistics reported during the 2015-16 school year, 16 percent of U.S. public high schools -- and 7 percent of all public schools -- required students to wear badges or identification.

The Springdale School District began requiring all of its high school students to wear identification a few years ago, according to spokesman Rick Schaeffer.

Rogers students don't have to wear them, though New Technology High School has an "iCard" -- a badge that comes with four levels of privileges students may earn. The lowest level of bronze affords students the opportunity to work outside their normal classroom area; the platinum level, which two students have attained, allows them to eat lunch off campus, said Karen Highfill, assistant principal. Students who've attained a level must wear the badge so staff members may easily tell they are allowed to be where they are.

Ronald Stephens, director of the National School Safety Center, wrote an article about safe schools that appears on the center's website. Being able to distinguish enrolled students from nonstudents and guests is critical, he wrote.

Prior to this year, both of Bentonville's high schools issued identification cards for various purposes. The cards contain barcodes allowing students to check out books and calculators or to buy food from the cafeteria.

There are about 2,000 students at West High School. Principal Jonathon Guthrie said he likes the new policy because it adds a degree of accountability.

"My theory is a student will be better behaved if his name is out there on the front of his shirt. There's just less anonymity," Guthrie said.

He also likes that it allows all students and staff members to know each other's names.

"We can address them by name. It just adds a more personal touch," Guthrie said.

Mason Nelson, a 17-year-old senior at West, said he doesn't have a problem with the lanyards, but knows a lot of people who don't like them. He said he feels a little more comfortable knowing who's who at his school.

"I see someone else has this and I'm like, OK, they also go to West. I don't have to think, who's this random person walking around," Nelson said.

Jack Loyd, Bentonville High School's principal, said he's been surprised at how easily students have accepted the policy. There are about 3,000 students at the school.

"There's one student that we've had some reoccurring issues with that doesn't want to wear it," Loyd said. "But I think one student out of 3,000 isn't bad."

If a student loses his badge or forgets it at home, he can buy one for $5 or get a temporary one for $1. The school was handing out about 100 temporary badges a day at the start of the school year, but now its between 30 and 40 per day, he said.

Spencer Taliaferro, a 15-year-old sophomore at Bentonville, said he's had to get a temporary badge four or five times so far. But he doesn't mind having to wear it.

"I see a lot of people taking it off and putting it on their desk," Spencer said. "They claim it's itchy on the back of their necks, and some people say it's just a pain to wear."

One benefit is being able to call a classmate by name, even if you've forgotten it, Spencer said.

Vedha Batta, a 15-year-old junior, said the identification badges make her feel safer. She added they "create a sense of unity" because everyone is wearing one.