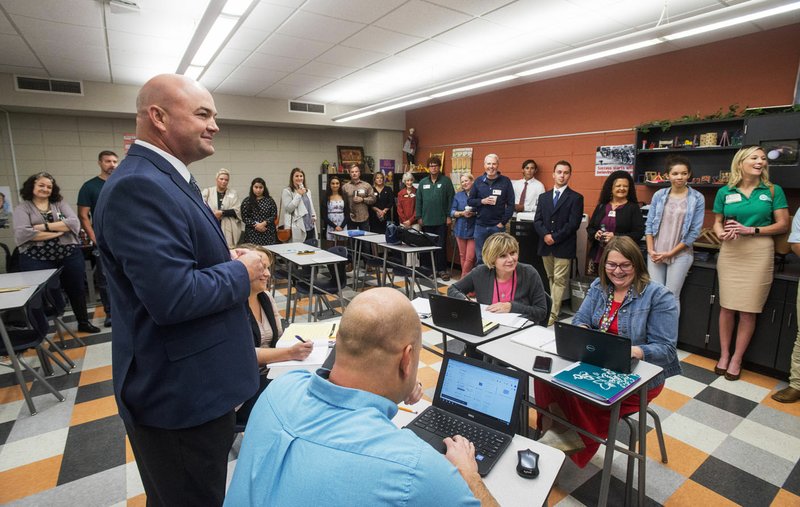 ROGERS -- Jim Davis likes to use the word "relentless" to describe the approach Heritage High School has taken in its pursuit of excellence.

Davis uttered the word more than once as he led community members on a tour of the school Thursday. As the tour ended at a spot overlooking the competition gymnasium and its recently repainted floor, he acknowledged the educational options available to Northwest Arkansas residents.

"We know there are 35 people moving into this area each day," Davis said. "We want to give those 35 people a reason to choose us." 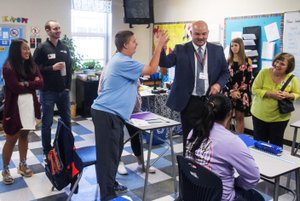 Thursday's tour was intended to show the community everything happening on the campus of about 2,000 students. He repeatedly emphasized Heritage is a "comprehensive" high school. Davis urged those on the tour -- among them, former Superintendent Janie Darr and former School Board member Jerry Carmichael -- to tell others about what they saw.

"Heritage High School deserves a great perception," Davis told the group. "I need your help to tell the story about Heritage."

Some perceive the school as slipping. U.S. News & World Report ranked Heritage no lower than sixth each year from 2012-2016 in its rankings of Arkansas' best public high schools. Heritage slipped to 10th in the state in 2017 and was unranked this year.

Davis' attitude is rubbing off on others, at least according to two students. Jackeline Caceres, 17, said Davis is challenging students more than they have been in the past.

"He's trying to make us better," Caceres said. "He's trying to get us more involved. You can just see the difference in the life and energy of everybody, even at pep rallies and at games. It's just more positivity. I really love the changes he's making."

Trenton Jackson, 17, also has noticed a change in school's culture since Davis arrived. There is a greater level of enthusiasm among the students, Jackson said.

One of the first things Davis and his staff decided was to focus on continuous improvement, he told the board at its meeting Sept. 18.

"And one of our staff's favorites was, no excuses from anyone," he said. "There's no excuse for us not to get better, and that's what we're trying to achieve."

Administrators took a deep dive this summer into the school's data to identify areas for improvement. The school has organized the school year into eight learning cycles of about four weeks each, during which material is taught and students are assessed on that material.

There's also been a renewed look at the standards most important for students to know when it comes to taking standardized tests, he said.

"There's a lot of things that are nice to teach, but if it's not aligned to the ACT or ACT Aspire or the AP exam, you're really being counterproductive, because you're teaching things the kids are not going to be assessed on," he said.

"Teachers will tell you it's been a very painful process, because it's required all of us to change the way we think and the way we're doing business."

The school also has set up groups of around 15 students who meet with an adviser on Fridays. It's an opportunity for that adult adviser to get to know those students, to check how they're doing academically and socially, and to encourage them to try an extracurricular activity. It also is expected the staff member will act as an advocate for those students, Davis said.