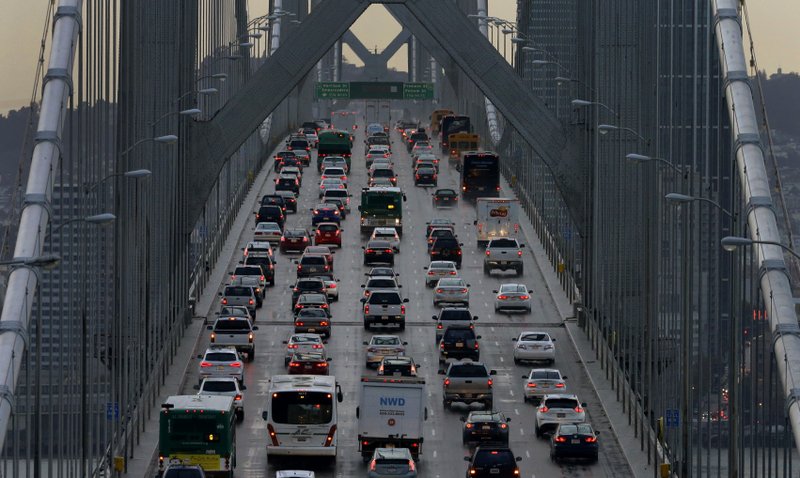 In this Dec. 10, 2015 file photo, vehicles make their way westbound on Interstate 80 across the San Francisco-Oakland Bay Bridge as seen from Treasure Island in San Francisco. (AP Photo/Ben Margot, File)

NEW YORK -- Honda says it will recall 1.4 million U.S. cars to replace Takata front-passenger air-bag inflators. The company says the recall, which covers Honda and Acura vehicles, is part of an attempt to get ahead of a government mandated schedule of recalls on the Japanese-made air bags.

Honda says owners of the vehicles should schedule the free repair at authorized dealerships as soon as possible.

The Honda recalls are the fourth part of a five-phase plan announced by the National Highway and Transportation Safety Administration in May of 2016. Honda says it is ahead of schedule with more than 77 percent of existing recalls repaired.

The inflators have resulted in the largest series of auto recalls in U.S. history, covering 37 million vehicles and about 50 million inflators.

Walgreens to pay $34M for deception

Walgreens Boots Alliance Inc. will pay more than $34 million to resolve Securities and Exchange Commission claims that the company's senior leadership failed to adequately disclose risks regarding its ability to reach earnings goals.

The company, former Chief Executive Officer Gregory Wasson and former Chief Financial Officer Wade Miquelon misled investors about increased risk that Walgreens would miss a key financial target that was announced in 2012 when the drugstore chain said it would merge with Alliance Boots, the SEC said in a statement Friday.

Walgreens initially said that by 2016, the combined entity would generate $9 billion to $9.5 billion in operating income and later reaffirmed the projection even after internal forecasts showed significant risk that the goal would be missed.

Walgreens and the executives agreed to resolve the SEC's claims without admitting or denying wrongdoing, the agency said. In addition to the company's penalty, Wasson and Miquelon each agreed to pay fines of $160,000.

The action by the California Air Resources Board was widely expected. It sets up a likely court battle if the Trump administration follows through with an attempt to revoke California's unique authority to set its own vehicle emissions standards. Those standards have been adopted by 12 other states that account for about a third of vehicle sales in the United States.

California officials and former President Barack Obama's administration agreed six years ago to a single national standard for tailpipe emissions requiring vehicles to get progressively cleaner through the 2026 model year. The Trump administration has proposed freezing the standards in 2020.

California and federal officials have been in talks over new national standards but have not reached an agreement. Automakers strongly prefer a national rule to avoid designing two vehicles, one for California and the states that follow its rules and another for the rest of the country.

Intel Corp., which dominates the market for personal computer processors, said it's taking steps to increase output and alleviate a shortage that had threatened to slow the industry's growth.

The Santa Clara, Calif.-based chipmaker has added an extra $1 billion to its capital-equipment budget this year, increasing output from existing facilities in the U.S., Ireland and Israel. The company said it has been surprised by a return to growth in demand for personal computers. Total spending in 2018 will be $15 billion, Intel said in a letter to customers posted on its website Friday.

Intel's effort to try to reassure its customers and investors about the company's production highlights the importance of output from its factories to the computing industry and the concern that has been building. The chipmaker's processors are the heart of more than 90 percent of the world's laptops and almost all server computers.

Intel has struggled to shift to a more advanced manufacturing technique, called 10-nanometer, and that has given rivals a chance to catch up in this crucial part of the chip industry.

Shrinking the dimensions of the tiny transistors that give chips their function allows chipmakers to produce them more cheaply, make them more powerful or give them the ability to use less electricity. Intel has led the race to make such improvements, measured in nanometers, or billionths of a meter, for decades.

Apple Inc.'s iPhones shouldn't be banned from the U.S. even though they infringe a patent owned by Qualcomm Inc., a U.S. International Trade Commission judge found Friday.

Judge Thomas Pender found that Apple infringed one of three Qualcomm patents in the case but declined to recommend the import ban sought by Qualcomm. The judge's recommendation "makes no sense," Qualcomm said.

The judge's findings are subject to review by the full commission, which has the final say. If the commission goes along, it would eliminate a powerful bargaining chip Qualcomm could use to push Apple into agreeing to pay license fees.

Qualcomm is seeking an import ban of Apple's iPhones that have chips made by Intel Corp.

COPENHAGEN, Denmark -- Denmark's A.P. Moller-Maersk, the world's biggest shipping group, said Friday that one its cargo vessels has successfully passed through the Russian Arctic on a one-off trial journey as a result of melting sea ice.

Palle Laursen, Maersk's chief technical officer, says "the trial allowed us to gain exceptional operational experience," adding that the Venta Maersk and all systems aboard performed well in the unfamiliar environment.

Laursen said the ship, which had a cargo of frozen fish, arrived in St. Petersburg on Friday, after leaving Russia's Pacific port city of Vladivostok on Aug. 22.

The Northern Sea Route could be a shorter route for journeys from East Asia to Europe than the Northwest Passage over Canada because it will likely be free of ice sooner due to climate change.

Experts say it could reduce the travel distance from East Asia to Europe from the 13,000 miles it takes to go via the Suez Canal, to 8,000 miles. That would cut transit time by 10-15 days.