Scraping bottom: Hogs’ offense has one direction to go 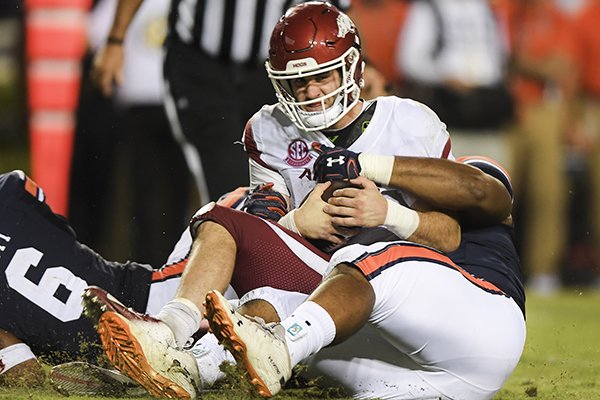 Arkansas quarterback Ty Storey is sacked during a game against Auburn on Saturday, Sept. 22, 2018, in Auburn, Ala.

FAYETTEVILLE -- The University of Arkansas won the total offense battle against No. 9 Auburn last week by a margin of 290 yards to 225 yards.

The bad news is Arkansas scraped together only two drives that penetrated the Auburn 25-yard line, and only three drives that went more than 25 yards total during its 34-3 loss to the Tigers.

That kind of ball movement will not produce victories in the SEC West.

The Razorbacks (1-3, 0-1 SEC) will hone their focus on sustaining drives and finishing them with points as they take on Texas A&M on Saturday at 11 a.m. in Arlington, Texas.

Arkansas enters the game ranked last in the SEC in scoring with 25.5 points per game and No. 13 with 374 total yards per game. Only LSU, with 352.5 yards per game, has a lower-ranked offense in the SEC.

Offensive coordinator Joe Craddock said Monday that he thinks the Razorbacks are "definitely on the right track, and we'll continue to build on what we did last week."

"Like I told our guys, we'll be in a good position in October if we'll keep continuing the way we did and keep building on last week's performance," he said. "It was not acceptable, and we'll never accept losing at all, but I do think we definitely did some things that we can take forward and build on."

The Razorbacks settled on a starting quarterback in junior Ty Storey and a front five of Colton Jackson, Hjalte Froholdt, Ty Clary, Johnny Gibson and Brian Wallace. However, they will likely be without two skill position starters against the Aggies.

Receiver Jonathan Nance announced his intention to transfer Monday and is not practicing with the team, and lead tailback Devwah Whaley took a hard shot last week and is being held out of practice while in concussion protocol.

If Whaley is unavailable, Rakeem Boyd, a former Texas A&M signee, is likely to see increased playing time in a rotation with Chase Hayden, T.J. Hammonds and Maleek Williams.

No matter what personnel the Razorbacks employ, they have to find a way to increase efficiency in all areas of the offense.

The transition to the no-huddle Spread attack run by Coach Chad Morris and Craddock hasn't been as smooth as they hoped. And turnovers, which were non-existent in the season opener, have jeopardized each of the past three games and put the Hogs' defense in field position binds.

"We've got to get better ... at staying on the field," Morris said. "That's a combination of things that happen there. You have to be better on first down, and we have in some regards, but not good enough.

"And then you have to be a very efficient third-down football team. That's something we've really struggled with."

Storey took the reins for the entirety of the loss at Auburn, and the Razorbacks looked more cohesive and cut their turnover count down from the six in a 44-17 home loss to North Texas in Week 3.

"I know it's obviously been kind of a slow start for us, but just to be able to keep coming in there every day and knowing I'm the guy, we're ready to roll with it," Storey said. "It's just exciting, and we just have to keep working."

"That's going to be really big," Stewart said. "Coach [Justin] Stepp told us to rally around Ty because he got the starting job last week. We're all just trying to stick with him."

"Chad's a tremendous offensive football coach, and their staff is," he said. "I've known him for a long time. He's probably still learning their guys, but you see that they move the football.

"I think they're a good offensive football team, I really do. They've just had some unfortunate things with turnovers. But they'll be ready to play. Chad will have them ready, I know that."

The third-down problem has grown in recent games.

The Razorbacks started 3 of 6 on third-down conversions at Auburn. That start included a 32-yard pass from Storey to Deon Stewart on third and 10 on the Hogs' second possession, and a 15-yard completion to Jordan Jones on third and 14 early in the third quarter.

It went downhill from there. The Razorbacks were 0 for 9 on third downs in the final 42 minutes.

"We've got to stay out of third and long," Craddock said. "Third and 7 plus kinda gets us in a bind. Negative and no-yardage plays. Getting behind the chains, and that makes it really difficult."

The Razorbacks had 299 rushing yards in a 34-27 loss at Colorado State in Week Two, but averaged 118.3 yards in the other three games.

Arkansas "reduced and clarified" its game plan against Auburn. A few plays, like first-quarter swing passes for Whaley and Boyd that fell incomplete, could have broken open and changed the complexion of the first quarter.

"I wish we could have hit both those early ones," Craddock said. "Would have been really good plays. That was two we wish we had back, obviously.

"We scaled back a little bit and had a couple of wrinkles just in case we needed them. We actually called them, so we're going to continue to build. It's all about what our players can remember, what they can retain and obviously go execute is what we want to be running."