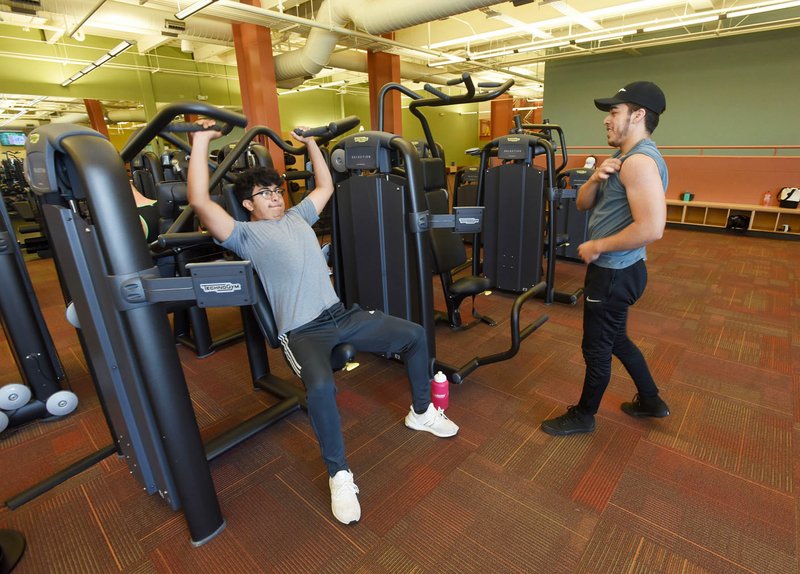 NWA Democrat-Gazette/FLIP PUTTHOFF Alex Arroyo (left) and Alan Pasillas work out Tuesday at the fitness center inside the Bentonville Community Center. The city of Bentonville may replace much of the current exercise equipment with new machines because of heavier than expected use of the community center.

BENTONVILLE -- Community Center patrons will soon have new fitness equipment to break in as the city is looking to trade in the gear it has.

The City Council approved 7-0 Tuesday to spend $177,335 on new equipment from Technogym. Council member Tim Robinson was absent. There was no discussion about the purchase during the meeting.

The Bentonville City Council met Tuesday and approved the following:

• The appointment of Aubrey Patterson to the Traffic, Safety and Signage Committee.

• To hire Tri Star Contractors for no more than $379,005 for the second phase of the municipal airport’s west terminal apron.

• A waiver of bid to purchase 20 ballistic vests for the Police Department for $17,629. 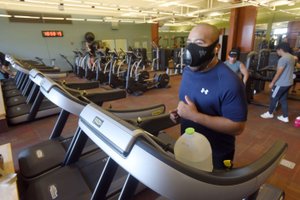 NWA Democrat-Gazette/FLIP PUTTHOFF Gustavo Lopez runs on a treadmill Tuesday at the fitness center inside the Bentonville Community Center. The city of Bentonville may replace much of the current exercise equipment with new machines because of heavier than expected use of the community center.

Only $150,622 of that will come from this year's budget. The remaining balance, which is for service agreements, will be paid out over the next two years, according to Lee Farmer, recreation services manager.

The purchase will include 12 treadmills and two stair climbers, which the center currently doesn't have, Parks and Recreation officials said. It also includes a full range of free weights and dumbbells.

Technogym is the same manufacturer of the center's current lineup of cardio and strength equipment.

The industry-standard life span for commercial treadmills is three years or 20,000 miles, according to Farmer's memo to the council. The center's three-year anniversary was in June. Its treadmills are averaging about 24,000 miles.

"The ability to move forward and replace this equipment, as opposed to this being a 2019 budget item, puts us in a position that the most recent equipment will be available for our patrons during the busy winter season," Farmer said.

Center usage has exceeded city officials' expectations. It needed 3,300 members to recover its costs, but there are closer to 5,500 members, said Mayor Bob McCaslin in an interview outside Tuesday's meeting.

"The usage has really been phenomenal," he said. "I think the usage today is approaching 1,300 to 1,400 a day. Many of them are there for this equipment."

The machines still have a good trade-in value, which was also taken into consideration to replace them this year instead of waiting until next year's budget, McCaslin said.

Council also approved a $158,747 budget adjustment to buy the equipment this year.

"There is no negative impact on the city for doing this," McCaslin said.

Fitness classes range from Zumba to pilates to strength and core conditioning to water aerobics. There are classes geared toward seniors and others for children.

There is also a child-watch center, a senior lounge and a mini branch of the public library.

Citizens Park, the acreage around the building has multipurpose fields, a one-mile hard surface trail, a pavilion, and tennis courts are under construction.