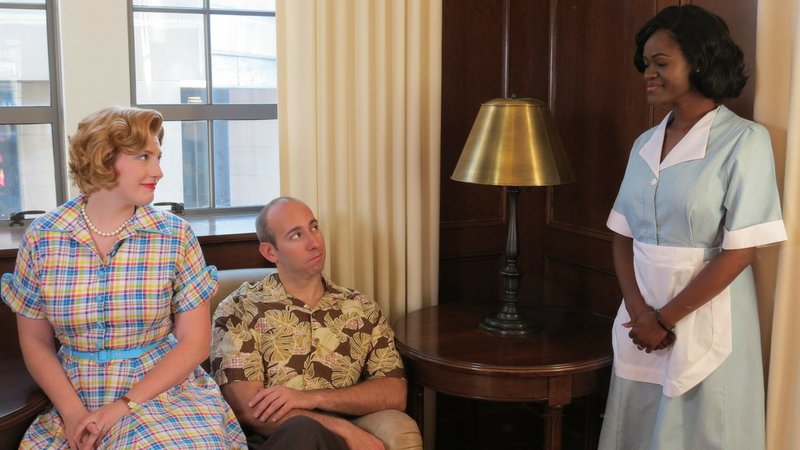 The script -- a sort-of companion piece (but not-quite sequel) that borrows a thread from Lorraine Hansberry's celebrated 1959 play "A Raisin in the Sun" -- is a treatise on hot topics of the day: racism, the potential ills of gentrification and fear of "the other." That it does so with a searing, blistering wit is part of its charm, says Michael Landman, director of the University of Arkansas production opening Sept. 28.

"[The plot] has more to do with the nature of human beings, that they're territorial and often fearful," says Landman. "It's the drama of the characters that makes us laugh, watching these characters -- they're so filled with tunnel vision of how they see the world. Part of what the playwright likes to do is stir the pot and talk about things that are taboo. When these situations come out throughout the two acts, people are forced to have conversations. When I watch it, I'm squirming -- I can't believe we're talking about this or saying that. And that's fun, to be the fly on the wall in this environment of people going for the jugular. It's entertaining to watch the characters desperately vying for their needs ... we can laugh at it and, maybe, see ourselves."

Norris borrows just one character from Hansberry's classic -- Karl Lindner, a representative from a community organization that attempts to prevent an African-American family from moving into an all-white neighborhood by offering to pay above asking price for their new house. In Act I, Norris imagines the conversation between Lindner and the white family who sells the house to Hansberry's characters. Act II takes place 50 years later, in 2009, when race relations have improved.

"The 50-year jump is the method [Norris] uses to show the way things have changed -- and haven't at all," says actor Chandler Reed Evans, who plays the role of Karl Lindner in Act I.

"This is 50 years later, and we're still telling the same story -- still arguing over the same things," says actor NaTosha DeVon. "This play focuses on how these characters all have facades: 'This isn't how I really feel, but this is how I'm going to present myself.' In today's world, we've gotten so much better at facades to trick ourselves and believe that we have changed. But if we've changed, why are we still having the same problems? Why are we still talking about the same things we talked about 10, 20, 50, 70 years ago? This play focuses on the question, 'Did we change, or did we just find another way to cover up?'"

"'Change' is a word that resonates strongly with me for this show -- something has to change," agrees actor Justin Mackey. "It's about finding a way to embrace that change without sequestering yourself or pushing other people or a group of people away and isolating yourself with what's comfortable and what's familiar."

Landman says that, in addition to his love for the script, the talent in the UA department of theater prompted him to suggest the show for the 2018-19 season. All actors must play two different characters from two different eras, a challenging prospect for any actor.

Another factor in the choice, he says, is whether a play "is compelling and needs to be discussed or explored as a community," and he notes that events in the Northwest Arkansas area in the past year or so certainly coincide with the themes of the show.

"Since we chose the play, for example, the homeless issue in south Fayetteville has become something for us to discuss," he says. "The gentrification in Springdale and how that impacts the community there is something I've been watching. It could be that choosing the play makes me more sensitive, or that, in these times, we're becoming more attuned to how we impact other people, how we live with other people."