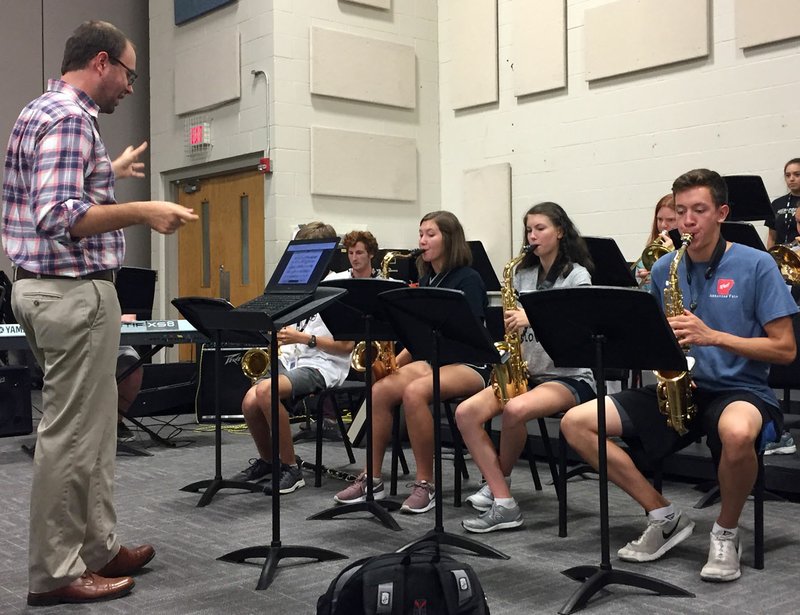 BENTONVILLE -- Bentonville High School's jazz band is back in the swing of things, five years after a staff member's death put it on hold.

The band restarted two years ago and participation is growing. There are 40 in the program, up from 28 last year, according to Philip Shewmaker, who teaches the jazz band class. That's enough for two bands.

The National Museum of American History describes jazz as “a kind of music in which improvisation is typically an important part. In most jazz performances, players play solos which they make up on the spot, which requires considerable skill. There is tremendous variety in jazz, but most jazz is very rhythmic, has a forward momentum called “swing,” and uses “bent” or “blue” notes.

Though Bentonville High School offers jazz band as a class during eighth period, only a few of the participants officially are enrolled in it. The rest are there just because they enjoy music and have the period free, Shewmaker said.

Micah Clark, a 15-year-old sophomore, is one of those students. Micah has played the trombone since she was in the sixth grade. Her academic day starts at 7:15 a.m. on Tuesdays and Thursdays -- what's called "zero hour" -- so her last period is open for her to do jazz band.

Zach Roddy had just started working for the Bentonville School District as an assistant band director, and had just assumed leadership of the jazz program, when he died in a car accident in Tulsa, Okla., on Oct. 12, 2013. The program came to an end.

Tim Hendrix, Bentonville High's band director, said staff members decided in 2016 they needed to resurrect the program. Shewmaker, who arrived as assistant band director a year later, took over because of his background and interest in jazz.

Jazz bands generally consist of saxophones, trombones, trumpets and a rhythm section. Swing, rock and funk are some of the styles the band plays. As opposed to marching band, where participants adhere strictly to a script, jazz band allows them freedom to improvise at times, Shewmaker said.

That creativity is a key piece of the students' development, he said.

Having room for creativity is what Alex Lockhart, a 16-year-old junior, likes the most. He plays the baritone horn.

On Thursday afternoon in the band room, Shewmaker led musicians as they practiced "Almost Like Being in Love" and "Chattanooga Choo Choo," both of which date back to the 1940s.

Shewmaker plans to get his students involved in competitions in the spring, the biggest of which is Basically Basie at the Kansas City Jazz Summit in April.

"So the district band staff has made a pretty big point to emphasize jazz education in our program, whereas just three years ago it didn't even exist," he said.

David Liebman, an American jazz musician who received a lifetime achievement award from the National Endowment for the Arts in 2010, published an essay on his website in which he describes the benefits of jazz education. The most important lesson learned in jazz playing is how to cooperate and work within a group while also maintaining some individuality, he wrote.

"The members of a jazz group have to work together to achieve musical results but each musician eventually gets a chance to assert their own will at one time or another with all the others in supportive roles. This constant changing of position [more on some instruments than others] is very dynamic and is a wonderful lesson in group interaction, something that all people have to deal with in life," Liebman wrote.

Not every high school offers jazz, though it is offered in most of Northwest Arkansas' big schools.

Jeremy Ford teaches jazz band at Springdale's Har-Ber High School. The band has about 25 students, all of whom also are in the school's concert and marching bands.

They perform at basketball games and also serve as the school's "musical ambassadors" in that the small group can mobilize easily to perform at community events and gatherings, Ford said.

Ford believes in teaching jazz because it's the only art form to originate in America.

"We talk about the historical significance. We don't just play it, we study it," he said. "Students get to know the Duke Ellingtons and the Louis Armstrongs."

Students must be in the regular band class to take jazz. There are about 20 kids in jazz band this year, Rowan said.

"I think we're really lucky at Rogers High School that we have it," Rowan said. "It's our only true form of American music. I think it's good that we expose the kids to that."

The Rogers High jazz band performs a Christmas concert, a spring concert and other occasional gigs, he said.

Fayetteville High School's jazz band meets not as a class, but in a club-like setting after school once the football season ends, said Barry Harper, the school's band director. Many Fayetteville students also participate in the Northwest Arkansas Jazz All Stars program at the Walton Arts Center, he said.

Students chosen by audition for the program learn jazz techniques, styling, music theory, improvisation and skills on their instruments leading up to public performances and a professional recording session, according to the center's website.