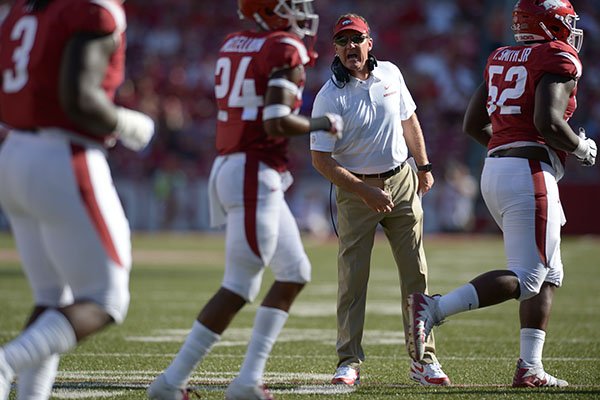 Arkansas coach Chad Morris speaks to his players against North Texas Saturday, Sept. 15, 2018, during the second quarter at Razorback Stadium in Fayetteville. - Photo by Andy Shupe

FAYETTEVILLE -- Let's just get this out there: Chad Morris' son, Chandler -- whom Morris goes to Texas to watch play high school football each Friday -- is just a junior.

And Mrs. Morris, Chad's wife and Chandler's mom, lives in Dallas with her son. Where else would a mom live?

A game that saw the University of Arkansas' entire punt team watch North Texas' Keegan Brewer act like he had made a fair catch, then streak down the left sideline for a 90-yard touchdown. Their view just wasn't as good as the players who fell for the bluff.

They saw the Razorbacks forced to take a timeout on a kickoff. A kickoff?

They saw the quarterback get penalized for a false start and an offensive lineman penalized for lining up in the backfield -- on the same possession.

At the half, the Razorbacks had been outscored 59-10 in their last three-and-a-half quarters by teams from the Mountain West and Conference USA.

Those things and losing to North Texas 44-17 are not fixed in a few hours on a Friday night before a game.

Neither is four interceptions by your starting quarterback who has such unbelievable faith in his strong arm that he's apparently never afraid to throw into double coverage.

And the plug wasn't pulled on Cole Kelley until he literally limped off the field.

True freshman Connor Noland got a hero's welcome when he trotted on the field with 6:17 to play in the third quarter. He was taking his first snap in a college game. True freshman John Stephen Jones also would see action at quarterback. That was encouraging to the fans who were still on hand.

There is a solution to what has happened at the UA. It isn't rocket science, but it takes time.

There is no way Chad Morris knew what a house of cards he was inheriting when he left SMU -- who lost to North Texas 46-23 a couple of weeks ago -- for the lure of Arkansas and the SEC, a challenge that has ended more than one coaching career.

There is no way Athletic Director Hunter Yurachek would have thought he was taking over a football program that in seven years had fallen from Top 10 to Bottom 10.

Forbes magazine reported the UA is the 13th most valuable college football program in the country, but it is obvious the Razorbacks aren't buying players.

The lack of talent is the elephant in the room. The Hogs are not void of talent, but there isn't enough.

It's tough enough to not contend for the SEC title -- and most everyone is playing for second behind Alabama anyway, although Georgia is coming on fast -- but to become the cellar dweller and unable to beat teams such as Colorado State and North Texas is almost impossible to digest for a fan base that's as loyal as any in the country.

A big reason Morris was hired is because he has Texas contacts. He was a well-respected high school coach there and won back-to-back, undefeated state championships.

Arkansas used to recruit Texas with ease, but that path was gone the day Bret Bielema insulted 90 percent of the high school coaches at their convention when he openly dismissed the hurry-up offense that most were running.

This is going to be a long, trying season for the players, coaching staff, administration and fan base, but Morris knows the problem and how to fix it. He just needs time to see if he can restock the cupboard on every shelf.